Trump Could Have Thrown Hillary Off Kilter 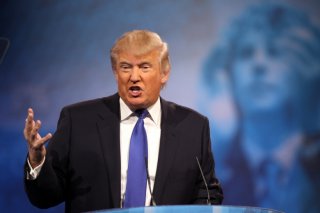 Step right up to this year’s political Super Bowl: admission is free, no hand stamps required. Monday night’s presidential debate between Donald Trump and Hillary Clinton did have a championship feel to it, coming after an exhaustive year-and-a-half-long campaign season that featured twenty debates between twenty-two primary candidates. The British may have a point when they limit their (non-Brexit) electioneering to only four weeks.

The competitors were evenly matched, and unexpectedly so. A surprise CNN poll released early yesterday found Trump and Clinton virtually tied in—not North Carolina—but Pennsylvania and Colorado, two states most believed had ossified for Clinton long ago, and the former of which hasn’t gone presidentially Republican since 1988. The Trump phenomenon, believed by many to be contained after the Democrats’ cunning summer convention, had burst out of its restraints.

It may have been boxed in again after last night. Trump lost—that’s the finding of both Frank Luntz’s focus group and CNN’s own post-debate poll, which had a decisive 62 percent of respondents calling the contest for Clinton. The Republican passed up opportunity after opportunity to deliver a hammer blow, instead getting sidetracked by his own tangents and sidebars, informing us during an answer on cybersecurity that his 10-year-old son is a computer whiz, and somehow inserting a spoken-word infomercial for his resort in Palm Beach. Oh, and a few days ago he was personally called by Sean Hannity, a name most voters had never heard before.

Clinton’s smirk was the same one worn by Gore Vidal during the 1968 Democratic convention, after William F. Buckley threatened to “sock” him. This debate, like that one, was a vicious cockfight, and at first it appeared Trump would win through sheer aggression and volubility. But eventually Clinton’s restraint, her halting deliberation of every word, even those slightly excruciating pauses when you expected a “buffering” progress bar to appear at the bottom of the screen, had the unlikely effect of making her appear presidential. She also got in her viral moments, most notably when she rebuffed Trump for mocking her preparation (he hadn’t—it was a pre-cooked line): “You know what else I prepared for? I prepared to be president.”

There’s a paradox at work in this election: the people are in a revolutionary mood, but as with all American electorates, they prize stability at 1600 Pennsylvania Avenue. Trump benefits from the former impulse; Clinton from the latter, and last night it was the preference for “prepared” that won out. Trump might have challenged this. He was never going to appear more statesmanlike than Clinton, but could have pressed her more persistently on issues friendly to his campaign and thrown her off-kilter.

Instead, there were few mentions of illegal immigration, none of the Benghazi attack, and zero of the Clinton Foundation, that moldering monument to the Democratic first family’s malfeasance. And while Clinton brushed aside her scandals and failures, Trump high-dove into his advocacy of Birther theories and never reemerged. Frank Luntz’s data show viewers punished him mightily for this. Given that moderator Lester Holt stepped back and let the candidates have at each other, Trump has only himself to blame.

He also failed to mount a comeback on foreign policy, which dominated the final act of the debate. Here was fruit to be picked: Clinton’s support for the Iraq war, Clinton’s prosecution of the calamitous intervention in Libya, Clinton’s risky plan for a no-fly zone in Syria, Clinton’s Russia reset, Clinton’s unbalanced pivot to Asia. Instead, Trump reminded us that we should have heisted Iraqi oil and got drawn into a duel on cybersecurity where Clinton clearly had the superior knowledge. She even managed a credible defense of the Iran nuclear deal (a Sisyphean task—believe me, I’ve tried). And on the Islamic State, she gave an answer larded up with names and locales, but that provided the instructive contrast: Trump says he’ll destroy ISIS, she actually knows how to do it.

I have yet to see a record of how much time each candidate spent speaking, but surely Trump got at least a couple minutes on Clinton—we do know he interrupted her 25 times in the first 26 minutes. And yet she did more with less. Trump’s problem was utterly predictable: he failed to get out of his own way and got snapped up by every bear trap she set. These are quintessentially Trumpian malfunctions and they should have been addressed long before the postseason.