The Trump Curveball: This Is What China Didn't Expect 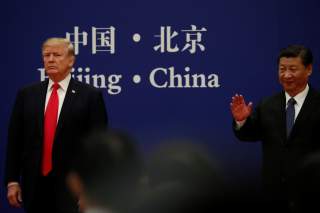 A long-planned meeting between President Donald Trump and Chinese ruler Xi Jinping, scheduled for the sidelines of the G20 meeting at the end of next month in Buenos Aires, looks like it might not occur. And even if the get-together takes place, it does not appear it will be productive. There may even be no discussions on the topic of the moment, the so-called “trade war.”

The U.S. won’t talk to Beijing about trade until the Chinese, in the words of the Wall Street Journal, submit a “concrete proposal to address Washington’s complaints about forced technology transfers and other economic issues.” For many reasons, China’s officials are unlikely to do that.

Call it, as the Wall Street Journal does, an “impasse.”

The Trump administration is quickly reversing four decades of American thinking. Presidents from Nixon to Obama made the success of China’s Communist Party a goal of U.S. policy.

But Trump has not only eliminated that goal—his policies are either hostile to Beijing or indifferent to its interests—he is also disengaging from China altogether. And that is, despite concern, a good thing. Our relations with the Chinese state probably will be better, at least in the long run, with less—not more—contact.

The dominant policy choice in Washington since the 1970s has been “engagement,” but that approach has been, in many respects, a failure, especially when it comes to trade. It is ironic that as Beijing gets ready in December to celebrate the fortieth anniversary of the 3rd plenum of the 11th Central Committee—the meeting considered the start of the Xi is repudiating reformist policies.

Xi, believing in the primacy of the Party and the power of the state, has marched China back to something resembling the systems created and maintained by Mao Zedong and Joseph Stalin.

Xi has, for instance, been busy recombining already large state enterprises back into dominant market players and, in a few cases, formal state monopolies. He has increased state subsidies to favored participants and has placed a new emphasis on industrial policy, like his notorious Made in China 2025 initiative that seeks self-sufficiency in crucial sectors.

He has tightened already strict capital controls, often enforcing unannounced rules. Moreover, Xi has dramatically increased state control over the equity markets, especially since the summer of 2015. Market-supporting purchases by the aptly named “National Team” are, in substance, renationalization. Xi, in addition to that effort, is partially nationalizing the tech sector.

Throughout Xi’s tenure, the state has, as is so often said, “advanced” and the market “retreated,” this despite the much-publicized promise, from the 3rd plenum of the 18th Central Committee in November 2013, to let the market play a “decisive role” in the allocation of resources.

Unfortunately, Xi Jinping is making all these regressive moves with such vigor and determination that it is unlikely foreign companies will achieve, so long as he rules, fair access to the Chinese market.

Xi’s Beijing has, not surprisingly, been blatantly disregarding obligations under trade agreements. He has been closing off China’s markets to foreign companies with discriminatory law enforcement actions, state media-promoted boycotts, and legislation, such as the Cybersecurity Law and National Security Law, which target non-domestic competitors. And he has been inserting Communist Party cells into foreign-owned operations in China.

At the same time, Xi has continued to take, by theft and by rule, hundreds of billions of dollars of foreign-intellectual property each year, much of it American.

Enter Trump. He was willing last year to do a deal with Xi on trade, making his accommodating position clear in his favorite mode of communication, tweets.

This year, the American leader resorted to searching for stopgap solutions. He had, for example, proposed that Beijing, essentially by fiat, cut the bilateral trade deficit by $200 billion by 2020. What was significant about this proposal, which was not evident at the time, was that the forty-fifth president had given up changing China. Instead, he was trying to improve outcomes for the United States on a negotiated basis.

That reduction-by-fiat attempt was quixotic at best, and having failed in this regard, Trump moved to Plan C. Plan C is the current plan and it involves disentangling the American and Chinese economies.

As a part of this last-resort effort, the administration this month announced the withdrawal from the UN’s Universal Postal Union, a move to end the subsidy for packages mailed to the United States from, among other locations, China. More fundamentally, the president’s team is working to get companies to move their supply chains out of China.

And Trump is starting to get his wish. As Andrew Collier of Orient Capital Research in Hong Kong tells the National Interest, “Many are now being forced to shift sourcing to Vietnam and other countries at great cost.”

Call that “disengagement.” Disengagement was clearly on the menu this month when the administration decided not to send a delegation of senior officials to the China International Import Expo, scheduled for November 5–10 in Shanghai. The event is, in the words of Beijing’s official China Daily, “the first-ever Chinese fair focusing exclusively on imported goods and services.” More than 2,800 companies from over 130 countries and regions will participate, including almost 180 American businesses.

Many have criticized the Trump administration’s decision not to participate in the event, but the president got this decision right. For one thing, the extravaganza is mostly a publicity event. If Beijing really wanted to import products, then it would simply stop blocking them from entering China. As a spokesman for the U.S. embassy in Beijing said in connection with the upcoming expo, “China needs to make the necessary reforms to end its unfair trade practices that are harming the world economy.”

The Chinese foreign ministry called the U.S. decision “hard to understand,” and many have said that the Trump administration was only punishing American companies. The fact that Trump is willing to accept painful consequences in the short run is the message. The president is saying, among other things, that everything Chinese officials think about their ability to manipulate the American political system—and about the weakness of America—is wrong. Trump’s move, whether one thinks it is counterproductive or not, is powerful signaling.

And of course the decision shows Beijing that the United States intends to disengage to the greatest extent possible. That is a chilling message for an export-oriented economy. Trump understands, unlike his many predecessors, that sometimes you have to show your adversary you don’t need or want them.

At the moment, as Charles Burton of Brock University told the National Interest, “there is no basis for give-and-take negotiation here.” His point? “While the U.S. has ample cause for dissatisfaction with China’s trade regime and pervasive use of economic espionage, China has no justified cause to make reciprocal demands on the U.S.”

Burton is correct. This is, as he contends, “an asymmetrical dispute whose sustainable resolution can only come via unilateral concessions on the part of Beijing.” And Xi Jinping, due to his marching China back to a Maoist-Stalinist economy, is not going to make those concessions.

Collier reports that “Western corporates in Asia are disappointed that the Trump administration has shown no interest in negotiating on trade.” But why should Trump negotiate when the U.S. maintains an open trading system and Xi Jinping’s China is going further down the road of theft and predation? And when decades of negotiation have been unfruitful?

Zhang Lin correctly perceives the situation. “The conflict between China and the United States is a competition between two different civilizations and value systems,” the Beijing-based analyst writes. In those types of struggles, there is little room for compromise. If there is not disengagement, then there is usually war.

Between the two courses of action, most would opt for disengagement. And that is Trump’s wise choice.