Is Trump a Death Sentence for the Iran Deal? 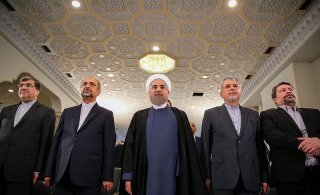 The election of Donald Trump has prompted a flood of commentary on the future of the Joint Comprehensive Plan of Action (JCPOA), President Barack Obama’s signature achievement. Trump repeatedly described the JCPOA with Iran as the “worst agreement ever” and promised to “dismantle” it. As is well known, the JCPOA, as a multinational agreement, cannot be abrogated by the United States alone. It is not even clear whether Trump, who, in his customary contradictory manner, also complained that sanctions hurt American chances of doing business with the regime, would attempt to kill it. Vice President–elect Mike Pence, a Tea Party supporter and an evangelical Christian, has been more consistent, vowing numerous times to rip up the accord.

Overlooked in the speculations about Trump’s future decisions is the dominant role that Congress would play in shaping American policy toward the JCPOA. In 2015, in conjunction with the government of Israel and the Israel lobby in Washington, congressional Republicans mounted an unprecedented but ultimately an unsuccessful campaign to derail the deal. Still, the lobby and its congressional patrons have not abandoned their effort to limit the economic benefits of the deal to Iran. One effective tool is new sanctions-generating legislation. Lawmakers from the House Republican Israel Caucus introduced several bills which would, among others provisions, extend the Iran Sanctions Act due to expire in December 2016, block the sale of eighty Boeing planes to Iran and prohibit the Export-Import Bank from financing business with Iran. Unlike President Obama, President-elect Trump is not expected to veto the anti-Iran legislation, setting a relatively low bar for its passage.

Another tactic is to discourage international companies from doing business with Iran, an effort coordinated by the Iran Project of the Foundation for Defense of Democracies (FDD), a premier anti-JCPOA lobbying center supported by Sheldon Adelson, a prominent donor to the Republicans and Trump. For instance, the FDD took a lead in denouncing the Treasury Department’s Office of Foreign Assets Control (OFAC) for easing controls on dollar transactions between Iran and foreign banks and companies. After initially banning all dollar-denominated transactions, OFAC reversed itself authorizing such dealings provided they are not processed by the American financial system. In yet another effort to spur international business with Iran, OFAC declared that foreign companies could transact business with non-sanctioned Iranian companies even if a sanctioned entity held a minority share of its assets. The Treasury also relaxed the requirement that foreign companies contracting with Iranian counterparts do automatic due intelligence. Since the Revolutionary Guards have operated numerous ventures with legitimate entities, the FDD decried this step as “green-lighting” business with the Guards.

The identity of the incoming Secretary of the Treasury is yet unknown, but it seems unlikely that OFAC would be allowed to continue its relatively lenient policy toward Iran. John Bolton and Newt Gingrich, rumored to be on the short list of key positions in the new administration, have been strong critics of the JCPOA. Bolton, who was in charge of arms control in the State Department and acting ambassador to the United Nations in the George W. Bush administration, has publicly advocating bombing Iranian facilities. In a possible preview of things to come, Mark Dubowitz, the executive director of FDD, has already taken to warning foreign companies about the risks incurred in doing business with Iran.

With so much at stake, Iranians followed the American election with great interest. The Hezb-e Etedal va Toseh (Moderation and Development Party) of President Hassan Rouhani and Ayatollah Akbar Hashemi Rafsanjani has the most to lose from the Trump presidency. Rouhani came to power in 2013 with a promise to fix the Iranian economy broken by years of mismanagement and sanctions. He managed to push through the JCPOA with assurances that the economic benefits would outweigh the cost of giving up the nuclear project—so much so that the Moderation and Development Party gained a majority in the 2016 parliamentary election. There is little doubt that a serious reduction of the economic benefits accruing from the deal would hurt Rouhani’s chances in the 2017 presidential election. Even a cursory perusal of the Rouhani-affiliated media, such as Iran, Etemad and Arman newspapers, among others, indicates more than a passing level of anxiety about his chances in the wake of Trump’s election.

There is even more apprehension about the moderates’ vision to normalize Iran’s existence as a country and bring it into the community of nations. In a little-noticed move, Rouhani prevailed upon the parliament to pass a resolution allowing Iran to join the Terrorist Financing Convention. Membership in the convention and its regional auditing groups is mandatory for countries seeking direct foreign investment, but requires their banks to ban all support for terror. Indeed, the Rouhani government ordered two leading banks to close accounts belonging to the Revolutionary Guards.

Rouhani’s normalization plan, more than the JCPOA, puts the moderates on a collision course with the Revolutionary Guards and Ayatollah Ali Khamenei. The former are incensed about Rouhani’s new banking regulations, while the latter opposes the type of broad opening to the world that the moderates are pushing. The supreme leader is known to worry that liberalization and Westernization would further undermine the corroding legitimacy of the theocratic state. Not surprisingly, hard-liners have reacted to Trump’s victory with glee. Depicting Trump's election as “a victory of the insane over the liar,” Kayhan, representing the Supreme Leader, called Trump “a shredder of the JCPOA, an agreement which had zero benefit for Iran.” Javan, a mouthpiece for the Revolutionary Guards, wrote that Trump is better for Iran because he would undermine the credibility of the moderates.

There is no compelling evidence to indicate that the hard-liners have plans to sabotage the JCPOA in the short term. But a defeat of Rouhani would embolden the Revolutionary Guards to act more aggressively on several issues, including provocations by the naval branch of the Revolutionary Guards, the Niroye Daryai Sepah-e Iran (NEDSA). Since July 2015, NEDSA vessels have been involved in some ten incidents, most of which were against American ships patrolling the Gulf. Those familiar with the complex, negotiated political order in Iran, suggest that, as a rule, such posturing indicates an intense political struggle between the two camps. More provocations can be expected in the run up to the election. So far, the U.S. Navy has reacted circumspectly, but during the campaign Trump promised that Iranian vessels would be “shot out of the water.” There are indications that elements of the Revolutionary Guards would like to test Trump while also diminishing Rouhani’s chances.

Anti-Iran advocates in Washington can use such steps to justify further punitive measures. For instance, a Senate proposal advocated by AIPAC would give the Trump administration power to impose sanctions on a wide variety of organizations and individuals for nonnuclear activities. The hotly disputed ballistic-missile tests conducted by the Revolutionary Guards in the past year would also come under a review by the new administration; Congress is already crafting legislation that would further sanction implicated countries, companies and individuals. Even small infringements—like the recent incident in which the IAEA reported Iran exceeding the amount of heavy water allowed under the deal—can trigger more measures.

Under Obama, such disputes were resolved by a special team of State Department and National Security Council officials, working with the IAEA. Whether the Trump administration would retain the team is doubtful, especially as such a move would be opposed by Bolton or other hard-liners, should they join the administration. Bolton, who accused the IAEA of covering up for Iran, would be most likely press for a more vigilant oversight of Iran’s compliance, creating additional friction. This, in turn, can trigger potentially damaging developments. Under the JCPOA terms, Iran is not due additional sanction relief until 2023, but the president is required to sign periodical waivers on sanctions that are on the books if Iran is judged to be in compliance. By refusing to issue the waivers, the Trump administration would essentially abrogate American participation in the accord.

Even without a formal abrogation, an aggressive American policy would make it hard for Rouhani to protect all the aspects of JCPOA-mandated compliance. Hard-liners may be encouraged by the fact that the EU, Russia and China are not likely to agree on snapping back sanctions, because they would hold the Trump administration responsible for disrupting flourishing trade with Tehran. It is virtually impossible to predict whether Iran, under a hard-line leadership, would resume its nuclear project. It is equally difficult to foresee whether an Obama-type coalition behind the JCPOA could be recreated in the future, should the need arise.

Dr. Farhad Rezaei is a research fellow at Middle East Institute, Sakarya University, Turkey. He is the author of the forthcoming Iran’s Nuclear Program: A Study in Nuclear Proliferation and Rollback (New York: Palgrave Macmillan, 2016).

Image: Hassan Rouhani at the opening of the Media Fair in Tehran. Wikimedia Commons/Creative Commons/Hamed Malekpour