Trump Deserves a Chance to Deal with Russia over Syria 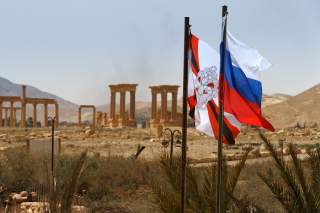 President Donald Trump has received the first formal pushback to his desire, stated on the campaign trail, to explore the possibility of working with Russia to combat Islamic extremist movements in the Middle East. An initial review completed by the Pentagon, and circulating among his senior national-security team, apparently recommends that the United States not pursue any of the proposals currently circulating for closer U.S.-Russia military cooperation in Syria against the Islamic State.

Collaboration in Syria was identified by participants in a recent U.S.-Russia Track II dialogue as one of the areas that the new administration might pursue in an effort to get the bilateral relationship back on track. As Andrew Parasiliti, the director of RAND’s Center for Global Risk and Security, and one of the members of the U.S. delegation, concluded, “If Russia is willing to cooperate with the US-led coalition in the fight against IS and al-Qaeda, and help end Syria’s civil war through a UN-brokered process, it should be welcomed.”

Such a dialogue on Syria would not be easy, and no one suggested that it would be. A critical question would be to define what groups and persons constitute members or affiliates of Islamic State and Al Qaeda–connected groups—with the Russians, in the past, having employed a very broad set of criteria to cover people the United States has considered legitimate opposition to the regime of Bashar al-Assad. Differences in rules of engagement for conducting operations would also be a barrier. These are matters that could and would be hashed out in further talks—with an added bonus that it would force both countries’ defense establishments to have to work together and coordinate at lower levels, and begin to forge some of the connective tissue between the two national-security establishments that has been lacking in the U.S.-Russia relationship in the past.

In turn, greater military collaboration would require the U.S. and Russian diplomatic efforts on the future of Syria to become better aligned. In particular, the U.S.-led process for political dialogue on a postwar Syria underway in Geneva would need to link up with the Russian initiative (with Turkey and Iran as cochairs) for handling military questions related to the tenuous cease-fire, the implementation of any political deal. In particular, the United States and its coalition partners would have to deal with the thorny reality that Assad is likely to be an active participant in any post-conflict Syrian future.

But, so far, the permanent bureaucracy (both military and civilian) isn’t receptive to these ideas of working more closely with Russia over Syria. The preference continues to be for the United States to retain its own freedom of action, while somehow balancing demands from the U.S. electorate not to become too directly involved in Syrian affairs. Not surprisingly, an anonymous quote from somewhere within the national-security establishment declaims that “they're very skeptical of this theory of the Russians actually being much use to our efforts.”

That, to me, is a very interesting statement. In the absence of new, clear directives from the current occupant of the White House as to what he wants to achieve in Syria and the Middle East, the U.S. government runs on autopilot, so that the perspectives and instructions of the previous administration remain operative. (Writing in 2005 in these pages, Robert Blackwill discussed how the dead hand of the past continues to exercise control unless and until it is specifically overridden by the new team.) If “our efforts” are still guided by the directive that U.S. policy is that “Assad must go,” for instance, or that regime change in Syria alongside destruction of ISIS is still one of the priorities, then certainly, Russia is not going to be of “much use” in helping the United States achieve the policy objectives of the previous administration. To the extent that lower levels of the U.S. national-security apparatus share these views, they are not going to change their perspectives simply because of statements that the president made while on the campaign trail—and instead would hope that they can persuade Trump that his instincts on cooperating with Russia in Syria are wrong.

And the president may very well be persuaded. He may conclude that Russia’s past performance—as Parasiliti notes, the Russians “picked their spots in battling IS”—will continue in the future and make Moscow an unreliable partner.

On the other hand, if he is not, he is entitled as commander in chief to send this report back down and ask for a reassessment. It would help if he would begin to issue new guidance on what he sees as the United States’ interests in Syria, and to what extent his intent differs from that of his predecessor, so that these instructions can factor into a revised plan.

At the same time, the president may want to consider using a “Team B” approach, and reach outside the existing bureaucracy for a second opinion. Just as in Iraq in the 2000s, so with regard to Syria in the 2010s: there has been an “established” way of approaching the problem, with stakeholders who become very resistant to considering new methods or strategies, because they are invested in the status quo. Last decade, when faced with continued bureaucratic resistance to considering a different way of stabilizing Iraq, the Bush administration found that using retired civilian and military personnel via the think-tank sector helped to produce a different way forward in Iraq—the “surge.” The Pentagon strongly resisted this approach, but its advocates were able to develop a convincing template and present it directly to the president for consideration. Perhaps it is time to repeat the process and have people on the outside, who are not invested in what the United States has been doing in Syria for the last several years, to take a fresh look at what might or might not be possible in terms of cooperating with Russia—and to present their own, independent assessment.

The president wants to explore new options on Syria. The Russians have signaled an interest in talking. The deal might not be consummated—but there is no reason not to make the effort.