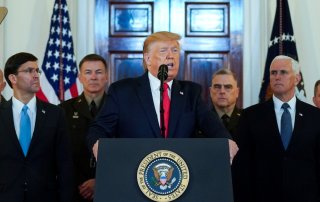 On September 14, 2019, Iran struck Saudi Arabia’s oil facilities in Khurais and Abqaiq from its own territory using twenty-five drones and cruise missiles. The attack represented the single largest disruption of daily oil supply in history. Never in the troubled history of Saudi-Iranian relations since 1979 had the Iranians assaulted the Saudis in such a direct, brazen, and destructive fashion.

The complex operation was a shock to the Saudis, to the Americans, and to all those (not few) who assumed such an act of overt aggression by Iran against any Gulf Arab nation was unthinkable in the presence of a powerful and forward-deployed U.S. military deterrent in the Gulf.

The Trump administration not only failed to deter but also to respond to Iran’s belligerence, thus casting doubt on the viability of the 1980 Carter Doctrine and its subsequent “Reagan Corollary,” both of which guaranteed the security of Saudi Arabia and other Gulf Arab partners. After all, the chief purpose of the continued presence of hundreds of thousands of U.S. troops and materiel in the region was precisely to prevent these kinds of conventional attacks.

In an insightful 2019 essay, Hal Brands, Steven Cook, and Kenneth Pollack argued that by letting Iran’s 2019 raid go unpunished then-President Donald Trump “deserted” the Carter Doctrine and undercut “the central premise of U.S. strategy in the Persian Gulf.” The authors made a valid point but missed a crucial part of the story: the position and interests of the one country that was actually the target of Iran’s violence—Saudi Arabia. All eyes were on the Americans, understandably, and how they were going to respond to the attack. Yet nobody paid much attention to the Saudis and tried to understand how they were weighing their options after they were hit. It was as if they had no voice or agency.

Many in Washington assumed that the Saudi leadership was furious with the United States for refusing to use military force against Iran. The Saudis were out for blood, the thinking was, and they were begging their friends in the Trump administration to take revenge.

Yet all of that was far from the truth.

Contrary to conventional wisdom, the Saudis were more than fine with the United States not retaliating against Iran. Indeed, as soon as those Iranian weapons hit their targets, Saudi officials unambiguously communicated to Washington their wish to de-escalate, urging Trump to hold fire.

Some might say that Saudi preferences didn’t matter. Trump had no appetite for a retaliatory strike anyway, having made it clear on several occasions that only when Americans are killed or American interests are attacked he would respond forcefully against Iran (months after the 2019 attack, he went on to eliminate Iran’s top military commander, Qassem Soleimani, in part to avenge the killing of an American contractor on December 27, 2020, by Iraqi militias loyal to Tehran).

But Saudi wishes were not irrelevant at all. Had the Saudis pushed hard for a U.S. military response, they could have gotten one. Saudi crown prince and de-facto ruler Mohammed bin Salman (MBS) had direct access to Trump and enjoyed a close personal relationship with his son-in-law, Jared Kushner, who oversaw U.S. Middle East policy from the White House. MBS had every opportunity to influence Trump’s judgment, and in truth, he wouldn’t have had to try very hard. Trump himself, already fond of the Saudis because of their wealth and penchant for mega U.S. arms deals, said the United States was “locked and loaded” after the attack and “waiting to hear from the Kingdom as to who they believe was the cause of this attack, and under what terms we would proceed!” If anybody showed restraint in that very tense moment which could have started a major war and upended regional stability, it was the Saudis, not the Americans.

This wasn’t the first time the Saudis had sought to calm things down, and thus influence U.S. policy, during crises with Iran. In 1995, the FBI had intelligence that Imad Mughniyeh, Lebanese Hezbollah’s late terrorist mastermind and most senior military general, was making a stop in Jeddah on his way from Khartoum to Tehran. American officials asked their Saudi counterparts to apprehend Mughniyeh—a man who had American blood on his hands and was implicated in the 1983 bombings of the U.S. Embassy and Marine barracks in Beirut. But the Saudis refused for fear of provoking Mughniyeh’s Iranian masters.

A year later, Saudi agents trained by Hezbollah and working for the Iranians bombed the Khobar Towers housing complex in Dhahran, killing nineteen American Airmen and injuring hundreds more. The Saudis knew who was behind the terrorist operation but they barely cooperated with the United States because they believed Tehran would lash out against them. They also didn’t want to be caught in the middle of a war between the United States and Iran had President Bill Clinton decided to retaliate against the Iranians.

This preference for caution on the part of Riyadh vis-à-vis Tehran, witnessed in 1995, 1996, 2019, and in other episodes including the 1980-1988 Iran-Iraq War, has served Saudi security interests well. The Saudis have always appreciated, wisely though grudgingly, that when it comes to their regional power struggle with the Iranians, they are the militarily weaker party and thus they will do everything they can to avoid a direct confrontation. MBS’s war in Yemen, meant to curb Iranian influence in the kingdom’s southern backyard, signaled a change in Saudi policy, but it was not a radical departure. Even under MBS’s leadership, the Saudis are still risk-averse when it comes to Iran because they recognize their military vulnerabilities and equally important, the holes in their security relationship with the United States.

None of this suggests that the Saudis are content with absorbing all the blows from Iran or that they are categorically against any kind of punitive action against their arch-rival. They obviously would not oppose an American war against Iran that removes the mullahs from power. But they also know that’s increasingly less likely to happen in a post-American Middle East, and short of “cutting off the head of the snake,” as Saudi king Abdullah once implored President George W. Bush to do, the Saudis will continue to avoid any situation where the United States stirs up the hornet’s nest just enough without getting rid of the hornets.

So, what does that mean for the future of the Carter Doctrine and the Reagan Corollary? It means that neither policy was a one-way street. The United States can declare all it wants that it will use force against a potential aggressor to secure its interests in the Gulf, but absent the buy-in and full cooperation of the locals, who actually allow Washington to station the very tools it needs to swiftly use that force, the Carter Doctrine and the Reagan Corollary will face severe practical and political constraints.

It’s tempting to say that Trump killed the Carter Doctrine, but in reality, he didn’t. It was arguably born dead because the Gulf Arabs and the Americans never really agreed on how to collectively respond to outside and particularly Iranian aggression whenever it materialized. For forty years, both sides didn’t have to have this conversation because U.S. conventional deterrence against Iran held, and the Iranians were never dumb or suicidal enough to roll their tanks and invade their neighbors like Saddam Hussein did in Kuwait in 1990.

A combination of luck, Iranian conventional military inferiority, and robust U.S. military power in the region (which Washington was willing to use) contributed to deterrence success. Now, the luck has run out, Iran is feeling emboldened, and U.S. influence and interest in the region are on the decline.

What the United States and its Gulf Arab partners need is a new security arrangement that effectively shares the burden of defending against Iranian hostility and goes beyond deterrence. That’s because deterrence has largely failed. Yet it’s hard to see this kind of conversation taking place and a demonstrable upgrade in security ties materializing when U.S.-Gulf political ties are strained, and the Americans seem headed for the exit.

Bilal Y. Saab is Senior Fellow and Director of the Defense and Security Program at the Middle East Institute. He is the author of the book Rebuilding Arab Defense: U.S. Security Cooperation in the Middle East.