Trump Didn't Stress the Issues That Have Fueled His Rise 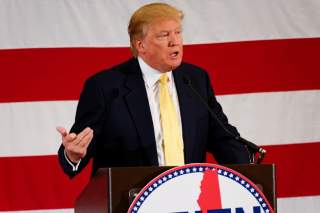 Donald Trump is the most unlikely presidential candidate from a major party since William Jennings Bryan, who was still in his thirties and merely an obscure two-term congressman when he was nominated by the Democrats in 1896 on the basis of a single convention speech. Trump entered this year’s presidential race with no political experience or serious base of operation but with abundant political baggage. And yet, going into last night’s first presidential debate, he was in a virtual tie with Democratic nominee Hillary Clinton in current poll numbers.

That was a remarkable political achievement. But last night he failed to exploit the debate to accentuate the full range of issues that had fueled his political success up to that time. He did engage with Clinton on trade, economic policy and the combination topic of race and crime. But he didn’t score significant points on four of the major issues that have buoyed his campaign—the future of the American judiciary, immigration, the dangers of foreign policy adventurism, and President Obama’s sputtering and unpopular health care legislation.

Of course, the debate topics were chosen by moderator Lester Holt of NBC, but clever debaters find ways to weave into their discussion the issues that they need to emphasize.

Clinton, meanwhile, brought to the debate the smooth efficiency she has developed over decades of political combat. She adopted a tone of amused dismissiveness, never passed up an opportunity to force him onto the defensive, and employed a cutting rapier approach to his bludgeon of attack and braggadocio. Clinton evinced an air of enjoying the whole thing, as when she responded to a Trump assertion that he possessed better judgment than her and also a better temperament. “I have a winning temperament,” he declared. “I know how to win.”

Clinton rocked her shoulders as if she were about to start dancing and said with a dismissive laugh, “Ooh! Okay!” At another point, she responded to a Trump pronouncement by saying, “Donald, I know you live in your own reality.”

Trump’s most significant accomplishment thus far in the campaign seems to be in his ability to scramble up the political fault lines that had led to the crisis of deadlock facing the nation. He embraced the prevailing GOP doctrine on filling judicial vacancies, on domestic economic policy and on the Affordable Care Act. But he took on both parties in his restrictive immigration advocacy. He elbowed aside the neoconservatives in his own party who for years have successfully pushed for an activist foreign policy (several of those neocons have said they will vote for Clinton). And he attacked with zeal the prevailing Republican views on free trade.

When Holt opened the debate with a question on how the candidates would create jobs, Clinton promptly defaulted to the prevailing Democratic view that the economic system is tilted toward the rich and must be rebalanced through redistributionist programs. She called for a higher federal minimum wage, “equal pay” for women, paid family leave, governmental child-care support, and “debt-free college.” She blasted what she called “Trumped-up trickle down.” Republicans believe, she said, that “the more you help wealthy people, the better off the rest of us will be. I don’t buy that.”

Trump’s default stand on the jobs issue, on the other hand, was his fiery call for restrictive trade policies. He vowed, as he has done throughout the campaign, to stop U.S. businesses from moving operations overseas by imposing tariffs on any products manufactured at those overseas operations if they are brought into the United States. “We have to stop our jobs from leaving, our companies from leaving,” he said.

He also promised to reduce taxes to levels that would spawn “job creation like we haven’t seen since Ronald Reagan,” and to cut back aggressively on federal business regulations. “I’m going to cut taxes big league,” he told Clinton, “and you’re going to raise taxes big league.” He also predicted that she would “regulate companies out of business.”

When Holt directed the debate toward the issue of race and crime, Clinton quickly accused Trump of being a racist, based primarily on his past embrace of the “birther movement” that questioned Obama’s citizenship and on a federal lawsuit against a Trump company early in his career for discriminatory real estate practices. Trump said the lawsuit was settled “with no admission of guilt,” and sought to wriggle out of the birther controversy in part by suggestion a Clinton partisan had pressed the issue with a Washington newsman when she ran against Obama for the 2008 Democratic presidential nomination. But the Republican has not been successful in efforts to remove the taint of the long-simmering birther controversy.

The race discussion quickly devolved to an exchange on tensions between the minority community and police departments, exacerbated by recent police shootings of minority citizens. Clinton offered vague “criminal justice reforms” aimed at restoring mutual trust in black communities. Trump issued a vigorous call for “law and order” and advocated the controversial police practice of “stop and frisk,” which has been the subject of emotional and complex legal proceedings in New York. “We have to have `stop and frisk,’ and we need more police,” he said.

While Trump mentioned immigration in passing, he didn’t issue anything approaching a strong critique of current immigration policy, which has been a fundamental element of his campaign since he first announced his candidacy. He didn’t talk about the sanctity of borders as a necessity of sovereignty or invoke his previously stated resolve to fight terrorism in part by seeking to keep terrorists and potential terrorists out of the country.

He also didn’t find a way to explicate his call for more foreign policy restraint in contrast to Clinton’s more adventuresome approach, despite the fact that polls indicate that has helped boost his campaign. He did defend his call for forcing NATO countries to defray more of the cost of their defense, currently underwritten by the United States, and he continued to insist, against the findings of most journalistic fact-checkers, that he opposed the Iraq War before it began.

If presidential debates are in part an exercise in scoring points, Clinton got the better of her opponent. She seared him on his refusal to release his tax returns by speculating on his possible reasons, including that he may not be as rich as he says, may not be as charitable as he says, or has paid little or nothing in taxes—“zero for troops, zero for veterans, zero for schools or health. There must be something horrible that he’s trying to hide.” She also accused him of financial abuse against people and enterprises that had done business with him and of being a man “who can be provoked by a tweet.” She criticized him for having “consistently insulted Muslims abroad and Muslims at home.”

These jabs kept Trump on the defensive for much of the debate and contributed to a demeanor that seemed less comfortable and less in control than Clinton. He had the look of a man who could have benefited from a little more debate prep.