The Trump Era Has Created a New Challenge for China 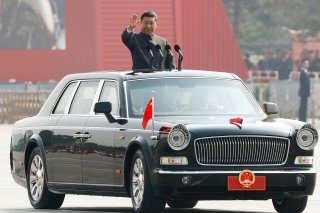 American officials have strongly signaled the move towards a great-power clash with China that will likely define international politics for the foreseeable future. While many have hoped for a more civil competition, American officials have signaled a full embrace of great-power conflict that will polarize the world economically, militarily and technologically. At this year’s Munich Security Conference, they urged the nations of Europe and many others to embrace a western front against China far beyond security and intelligence issues. They specifically took aim at China’s 5G technology produced by Shenzhen-based tech giant Huawei.

Secretary of State Mike Pompeo’s speech in Munich, a mix of confronting the Europeans about “reality” and football coach pre-game pep-talk, was dedicated to challenging the Europeans on the narrative of the transatlantic decline. True to form, the “Secretary of Swagger” elating the crowd with a jubilant narrative about how the West is victorious against all foes and that European states need to join the American bandwagon to bask in the glory. Joining America very specifically meant aligning with Washington against China. He said “Huawei and other Chinese state-backed tech companies are Trojan horses for Chinese intelligence.”

In his address, Secretary of Defense Mark Esper offered the same review of China’s WTO membership and stated that the world must “wake up to the challenges presented by China’s manipulation of the long-standing international, rules-based order that has benefited all of us for many decades.” Esper said that China’s economic and technological development and its military expansion was a threat and argued that Europeans adopt western technologies on 5G communications to the exclusion of China’s Huawei “today’s poster child for this nefarious activity.”

Pompeo’s speech was actually somewhat mild compared to other anti-China addresses he has made recently, most notably his address to Stanford University’s Hoover Institute, where he dedicated the bulk of his speech to how the United States is responding to the “challenge from the People’s Republic of China” and chastised Beijing’s policies on a range of topics including human rights, military policy and trade, going as far as saying that American support of Chinese ascendance into the World Trade Organization was a mistake.

No one can doubt that the specter of near-pear competition looms large but Esper and Pompeo’s desire to take on the posture they did in Munich likely has more than one reason. For one thing, without the United States trying to set the agenda around China, the focus on the conference would have likely been overwhelmingly on Russia. This attention would not have necessarily been entirely negative. For his part, France’s President Emmanuel Macron encouraged dialogue with Moscow but the discourse in an international conference being focused on Russia and President Vladimir Putin would have likely been awkward and complicated to maneuver for the large American contingent in attendance.

Furthermore, civilizational competition with China and Russia would also restructure America’s now expanded alliance network. With the fall of the Soviet Union, much of the former Soviet satellite and non-aligned nations of the world have been absorbed into the “Liberal Order” which is an American sphere of influence. This has created a broader order that includes a diverse array of countries with their own agendas and priorities. This is indeed much less orderly and unified than its smaller Cold-War predecessor that was comfortably situated atop a community of values that were centered upon the United States, Japan and Western Europe. This specter of an aggressive competition with the fate of the world at stake could result in allies being more pliable to U.S. demands in a manner similar to the current state of many Eastern European countries who feel particularly bedeviled by an assertive Moscow.

As various media accounts have made clear, the China approach landed in Munich landed like a thud. European leaders focused instead on the development of indigenous and independent European security partnerships that they typically insist is designed to bolster NATO not relegate it. With the Europeans worried about the stability of U.S. leadership and its policies on a spectrum of issues ranging from the Middle East and Russia to the United States withdrawing from a variety of international agreements the Europeans see as essential, including the Iran nuclear deal and the Paris Accord, it’s no surprise that countries are wary about following America’s lead into another Cold War. It is also the case that the economic magnetism of China is far greater than the Soviet Union’s ever was.

The United States cannot even seem to get its closest European ally to rebuff China’s sway. The United Kingdom sees “China is a land paved with gold it cannot afford to stay away from.” It has agreed to allow Huawei to build a considerable amount of its infrastructure even with an Atlanticist Conservative government occupying 10 Downing.

Never mind that while cabinet-level secretaries call for closing ranks against China, a few weeks ago in Switzerland, President Donald Trump claimed that Sino-American “have probably never been better.” During his official address at the Davos Forum, he said “[w]e went through a very rough patch, but it’s never, ever been better. My relationship with President Xi is an extraordinary one.” He added that he and the Chinese Premier “love each other.” This ambiguity is obviously a key factor in European apprehensions about whether to take an express U.S. policy direction seriously. U.S. officials keep telling European allies to ignore Trump and pay attention to his direct cabinet-level subordinate but that obviously has its limits. In the event of an acute security episode or crisis, it will not be the Secretary of State who decides what course of action the United States will choose.

Coercive Hegemony and Its Prospective Investors

But the fundamental issue underlying European trepidations about supporting American leadership against China involves the kind of superpower America has become in the Trump era. International relations scholars have often outlined three forms of how a country can exert global hegemony. The benign hegemon which is happy to absorb the cost of global security and trade, the structurally advantaged hegemon that recovers cost through the accumulated political advantages of being the hegemon, and the coercive hegemon that enforces a kind of taxation on other states to recover the cost. The United States thinks of itself as the prior form, actually operates as the middle form and, in the era of Trump, is very clearly transitioning to the later.

What Pompeo and Esper were asking of the Europeans, especially on the issue of 5G telecommunications, was to invest in the future of American hegemony for the sake of the coming clash against China. Perhaps on no issue more clearly that 5G communication, the United States is asking Europe to forego its economic interest for the sake of American advantage. Attorney General William Barr has already acknowledged that the 5G issue is not merely a security concern, it’s an endeavor to maintain a qualitative economic and technological edge over China as well. This should not be a surprise as great-power conflicts are a societal competition rather than just military and intelligence rivalry. But facing a hegemon fundamentally contemptuous in their interests, hostile to their priorities and increasingly at odds with their values, they do not see such an investment as being in their best interest.

A survey of eight key European countries featured in the 2020 Munich Security Report, published at the conference, showed that Europeans overwhelmingly support their nation taking a neutral position in the Sino-American rivalry. They even favored neutral footing on the competition with Russia by comparable margins. An examination of the views of European ambassadors in Washington conducted by the Carnegie Endowment also displayed the deepening disenchantment with American leadership in Europe. They even said that a second Trump term in office “would lead some countries in Europe to conclude that they could no longer rely on the United States and, as such, begin to draw a ‘moral equivalence’ between great powers and look for a new ‘European middle way’ between the United States, Russia, and China.”

This is to some extent already occurring as European discourse around trade and security is replete with conversations about independent European solutions to security issues. Washington’s more unilateralist approach towards the world has various advantages and disadvantages, but any assessment of it has to consider the second and third-order consequences that were broadly on display at the Munich Conference.