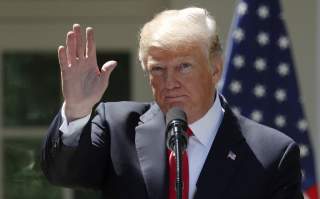 AFTER A YEAR and a half in office, Donald Trump’s foreign policy appears poised for success, though some major challenges in approach and execution remain. While still a work in progress, the president’s approach already reflects some commendable and much needed changes, genuinely putting America first and making foes and friends alike take American positions more seriously.

America’s international conduct has become noticeably more muscular, relying on a significant increase in the military budget and a demonstrable willingness to use force. This is particularly true in Syria; Trump’s red lines are more credible than Obama’s, and when Trump threatens to use military force, few are ready to gamble that the American president is bluffing.

Indeed, when the president has decided that important U.S. interests are at stake, he has been prepared to go further than his predecessor Barack Obama. Limited but psychologically effective air strikes against Syria, as well as the decision to supply Ukraine with Javelin anti-tank missiles (which Obama avoided due to fears of escalating the conflict there), show that Trump is willing to use military force not only as a last resort, but as a legitimate and essential tool of American foreign policy. This offers the United States an important advantage in dealing with adversaries like Iran and North Korea. As a result, each is less certain that America will give up on its core objectives if it fails to get what it wants through economic and military pressure.

But there is a lot to worry about too. So far, the administration has struggled to complement appropriate pressure with equally creative diplomacy. Moreover, the president and other key players in his administration often act and speaks inconsistently. Notwithstanding a formal National Security Strategy released in December 2017, the administration continues to lack a coherent strategic framework that defines national security priorities. To be more precise, the administration has yet to define American priorities in a serious analytical manner and has acted as if the United States can escape hard choices and the risks of potentially costly unintended consequences.

Paradoxically, while many governments increasingly appear to view the United States as a formidable superpower that they cannot easily cross or ignore, many of the same governments see the administration as erratic, unable to evaluate situations objectively, and prone to personalizing relations with foreign leaders and countries—even in dealing with other major powers. To these governments, the United States seems capricious and offers few tangible incentives for accommodating American preferences. This is an obstacle for Trump in accomplishing his international objectives.

It is fair to give the president credit for delivering, or working to deliver, on many of his electoral promises, something that is reportedly a source of pride for Trump. As a candidate, Donald Trump said that he would take a tougher stance on illegal immigration, demand more beneficial trade arrangements from other nations, downplay the struggle against climate change, and avoid regime change and meddling in the internal politics of other states.

While there is still no sign of a Mexico-financed border wall and Trump’s vigorous calls for concessions from American trading partners have yet to demonstrate significant results, the president has stayed on course despite the numerous domestic and international obstacles. Trump has forced the outside world to take him seriously. Other nations, including major powers such as the European Union, China, Russia, and even North Korea and Iran, have appeared ready to display some flexibility. In the case of Russia, while Obama’s sanctions succeeded in causing indignation among the Russian people, and particularly among the elites, Trump’s more far-reaching sanctions—zeroing in on key public companies and top Putin-friendly tycoons—are beginning to disturb Moscow and to curtail its earlier snide dismissal of U.S. and Western pressure. At a minimum, Trump’s willingness to impose new sanctions discourages Russia from risking escalation with the United States in Syria or Ukraine.

One of the most intriguing aspects of the Trump campaign’s foreign policy rhetoric was its fresh and unorthodox attitude towards America’s national security priorities. Candidate Trump was not sophisticated about international affairs and struggled to present well-formulated alternatives to America’s conventional foreign policy approaches. Yet he did have a business leader’s intuitive practical sense in looking at the world as it relates to America’s national interests. Throughout the campaign, he raised valuable questions without necessarily offering thoughtful answers about alternative national security strategies for the United States. Trump started by questioning conventional assumptions about America’s allies and adversaries and seeing neither category as wholly self-evident, unlike the establishment, whose cliches he refused to repeat. Instead, he asked what America’s allies were doing for the United States and what U.S. alliances cost. As far as adversaries are concerned, he began asking some obvious but rare questions about which countries present significant problems for the United States and which pose lesser problems that might be amenable to resolution.

In thinking about national security, Trump seemed to view radical Islamic terrorism—responsible for 9/11, the Boston Marathon attack, and many other attacks in the United States and Europe—as the top threat. Focusing on that problem is neither capricious nor inherently racist. Trump clearly saw trade imbalances with China and many European nations as a major problem too. Even free trade champions would not deny that Beijing was introducing new protectionist measures denying U.S. companies market access parallel to what Chinese companies enjoy in America. Questioning why prosperous Europeans enjoying subsidized U.S. defense deserve trade advantages too should not be considered offensive; it is a fact that average U.S. tariffs on goods are just 2.4 percent when average eu and Canadian tariffs are 3 and 3.1 percent, respectively. But Trump will need to pursue his trade policies in a more coherent fashion that avoids gratuitously damaging relations with longtime allies—who are still very important to U.S. security—and artificially inflaming tensions with American adversaries. Simultaneous trade disputes with Mexico, Canada, Europe and China would defy strategic logic.

After America’s physical survival and economic prosperity, Trump appears to see maintaining sovereignty over America’s borders and preventing an influx of illegal immigrants as the country’s next most important national interest. For Trump, this and a $70 billion trade deficit in 2016 made U.S.-Mexico relations a top challenge and an area needing game-changing corrections.

As a candidate, Trump did not include Russia on his list of the top challenges to the United States, despite increasingly widespread establishment perceptions of Russia as an adversary. With Russia’s gdp around 10 percent of America’s and its conventional forces far from a match for NATO, Trump had good reasons to wonder why a country that Obama described as an economically-weak regional power should become an organizing principle of America’s security policy.

This raised an inevitable question about NATO: was it a necessary instrument to protect American security or a Cold War–era organization that had outlived its original purpose to contain Soviet expansionism? If the Europeans were so afraid of Russia, why were they spending so little on defense compared to the United States, and why were so few European nations prepared to meet NATO’s stated defense spending goal of at least 2 percent of gdp? Since NATO was no longer relevant to the fundamental challenges candidate Trump saw to America, was it a sacred cow rather than a powerful vehicle to protect American interests? Was America quietly being taken for a ride by European allies while becoming increasingly enmeshed in European conflicts of little importance to the United States?

George Washington counseled against steps that would “entangle our peace and prosperity in the toils of European ambition, rivalship, interest, humor, or caprice.” The fact that America has a commitment to defend NATO allies need not imply a parallel commitment to support their every venture. Europeans certainly feel no such obligation to America, as demonstrated by their lack of support for America’s commitment to Israel, including at the United Nations. Trump appeared intuitively to see this asymmetry and to turn a skeptical ear toward virtuous language that obscured limited help for Washington and its priorities. He likewise seemed to dismiss assertions of superior values from governments building a supranational bureaucracy that constrains businesses and limits freedoms.

The problem with Trump’s foreign policy rhetoric as a candidate and, at times, as president is that he poses good questions more often than he provides adequate answers. Trump has exposed himself to legitimate criticism because he often seems prepared to risk important relationships without clear gains. Mexico can be a troubling partner, but it is also an essential one. The combination of geography, extensive trade and millions of Americans of Mexican heritage requires approaching any revision of U.S.-Mexican relations with great finesse—something in short supply in rhetoric that ranged from condescending (or worse) references to Mexican immigrants to unrealistic calls for an impenetrable Mexican-funded border wall. America’s relations with its European allies are likewise important to U.S. security, as are partnerships with key governments in the Middle East. Simplistic rhetoric—whether about Mexican immigration, Islamic terrorism or the flaws of our European allies—can turn off millions of American voters. It is also highly divisive and, as a result, is an obstacle to Trump’s effort to reform American foreign policy and to “Make America Great Again.”