Trump at the G20: Is He Following In George H.W. Bush’s Footsteps? 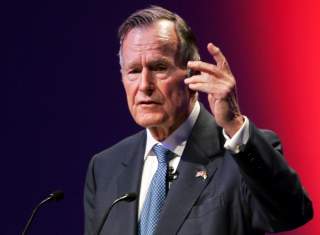 Will Donald Trump end up following in the footsteps of George H.W. Bush? Many commentators are drawing invidious comparisons between the two men. Now that he has died at age 94, Bush is being hailed as a farsighted foreign policy president, while Trump is cast as the bad boy of international relations. But Trump, who had previously made disparaging remarks about Bush, signaled a more conciliatory approach at the G20, where he was fairly subdued in his meetings with foreign leaders and lauded Bush for his public service.

Bush’s priority in international affairs was creating stability in a revolutionary age that would allow the United States to solidify its preeminence. He assembled a stellar foreign policy team. Secretary of State James Baker and National Security Advisor Brent Scowcroft shared Bush’s realist vision of foreign affairs and helped him to implement it. After Tiananmen Square on June 4, 1989, Bush, who had served as the unofficial ambassador to China, insisted on maintaining ties to Beijing rather than turning it into an outcast. Bush felt an emotional tie to Beijing: “My long history with Deng and the other leaders made it possible for us to work through the crises without derailing Sino-American relations," he wrote in his diaries. He dispatched Scowcroft for a secret meeting in July 1989 to sound out the communist leadership.

Trump, by contrast, has been flirting with inaugurating a new cold war with China. But he bowed to the inevitable in reaching a truce with China’s Xi Jinping at the G20 meeting in Buenos Aires. Trump agreed to postpone increasing tariffs on Chinese goods from 10 percent to 25 percent in January. In return, Xi promised to bolster Chinese purchases of American agricultural and industrial products. Ever the salesman, Trump called his dinner with Xi an “amazing and productive meeting with unlimited possibilities for both the United States and China.” The two sides face a 90-day deadline to reach a more sweeping agreement. Whether they will reach one is an open question. But the stakes for Trump are high. He simply cannot afford to crash the American stock market or further punish American farmers without incurring severe political damage. Trump is perfectly capable of executing a volte-face on China as his exuberant statement about meeting with Xi indicates.

Like Bush, Trump is also not averse to diplomacy. North Korea remains on his mind and he needs China’s help to prompt the North to adopt a more conciliatory posture. He told reporters that he may meet with Kim Jong-un in January or February of next year. For all the emphasis on Trump’s bellicosity abroad, he has already been a more peaceful president than Bush who launched Operation Just Cause to oust Panamanian dictator Manuel Antonio Noriega in mid-December 1989.

When it comes to Europe and Russia, Trump may adhere more closely to the Bush line than is often assumed. Bush deserves plaudits for his superb management of the end of the Cold War. He is regarded with reverence in Germany, where many credit him with making reunification possible by designing the Two-plus-Four negotiations that provided Moscow with a face-saving exit from East Germany.

Trump entered office promising vastly improved ties with Moscow. He also suggested that he might upend the NATO alliance, focusing on the issue of allied burden-sharing, or the lack of it. But there has not been significant change in America’s stance toward NATO or Europe. Trump even sounded approving about Germany’s Angela Merkel at the G20 summit.  Merkel, he said, is doing “an incredible job” and is “Highly respected by everybody, including me.” Still, Trump is also making threatening noises again about the trade imbalance between Germany and the United States, something that is again causing alarm among German auto manufacturers such as BMW.

But at the G20, the shadow of Bush clearly hovered over Trump. Trump was on his best behavior, coming close to practicing Bush-like self-effacement. He did not put the spotlight on himself but rather on the former president. “The fact that we lost a president who truly was a wonderful person, a wonderful man, a great man—it really puts a damper on it, to be honest with you,” he said as he met with Merkel. The Washington Post reports that the state funeral for Bush is even prompting Trump and Congress to consider delaying a partial government shutdown in the form of a two-week funding extension. It would be foolish to think that a new era of good feelings is about to begin in Washington. Trump faces numerous battlefronts. But the question that the rhetorically pugnacious Trump faces as the Democrats prepare to take over the House of Representatives is whether or not he will pivot in foreign and domestic policy, becoming a more traditional Republican or continuing to seek to follow a more nationalist course.