Trump Goes on the Attack in New Foreign-Policy Speech 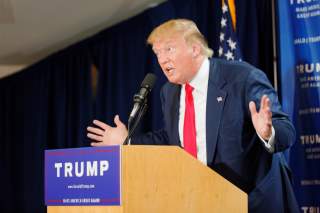 This marked a polar opposite from the tones that Hillary Clinton sounded a few hours before Trump—and from the ones that leading Republicans such as House Speaker Paul Ryan and Senate Majority Leader Mitch McConnell would like him to adopt. Trump declared that he would not succumb to political correctness in battling radical Islamic fundamentalism. And he repeatedly invoked an omnipresent Muslim threat inside America that threatens to sap its liberties and freedoms, replacing them with terror, violence and fear.

In contrast Clinton used more emollient language. She said, “we should be intensifying contacts in those communities, not scapegoating or isolating them.” Throughout, Trump made it clear that he will depict President Obama and Hillary Clinton as wholly unfit to combat the grave perils emanating from inside and outside America. He sought to undermine Clinton’s support in the LGBT community by essentially arguing that her support was merely rhetorical. In practice, he suggested, she is endorsing policies that jeopardize its safety.

In contrast to Clinton—who did not mention Trump by name during her speech Monday and offered a three-part plan that included beefing up resources for first responders and law enforcement and intelligence officials—Trump repeatedly assailed her and Obama. He pointed to her support for intervention in Libya as helping to spawn terrorism.

Earlier in the day, Trump had suggested that Obama himself was either naïve or perhaps abetting terrorists. "Look, we're led by a man that either is not tough, not smart, or he's got something else in mind," Trump told Fox News. "And the something else in mind — you know, people can't believe it. People cannot, they cannot believe that President Obama is acting the way he acts and can't even mention the words 'radical Islamic terrorism.' There's something going on. It's inconceivable. There's something going on."

Trump did not specify in his speech just what he believes is going on with Obama. Trump devoted much attention to halting immigration into the United States by Muslims. He did not linger on the fact that the shooter in Orlando was born in America. But he did complain that Americans are told about “homegrown” terrorism. Trump suggested that the distinction between foreign and domestic terrorism is largely otiose. He pointed specifically to lax immigration policies as the culprit for the Orlando massacre: “The bottom line is that the only reason the killer was in America in the first place was because we allowed his family to come here.”

Trump did not offer a wealth of particulars about how he would proceed to strengthen American domestic defenses. He indicated that ISIS had to be defeated. He also said that he would appoint top-notch officials to intelligence positions, in contrast to the Obama administration. But Trump’s speech was more an outline of the perils that he divined for America than a blueprint for how he would proceed as president.

It would be hard to think of a starker contrast between two candidates. Instead of muting his positions, Trump clearly believes that the issue of Muslim terrorism is one that he can ride into the White House. Clinton, by contrast, is presenting herself as the anti-Trump. Her and Obama’s greatest vulnerability has been to refuse—only today did Clinton backtrack—to identify radical Islam as a direct threat to America.

Trump’s focus on Muslims has managed to unite liberal and conservative elites against him, a phenomenon underscored in a tweet today by Washington Post blogger Jennifer Rubin who observed, “Trump inneundo [sic] about Obama is vile stuff, unhelpful and indicative of a floundering narcissist in way over his head.” CNN’s David Gergen, by contrast, indicated that Trump’s combative speech will win him new adherents. Whether or not it does, Trump has made it abundantly clear that he will continue to go on the offensive in coming months, no matter how much what he says horrifies elite Republicans as much as Democrats.