Trump Goes on the Offensive 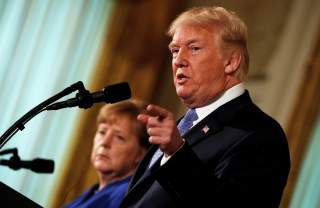 German chancellor Angela Merkel was no sour Kraut when she visited Donald Trump on Friday afternoon. It was all smiles on both sides. Trump gave her a kiss on the cheek as she emerged from her limousine and referred to their “great relationship.”

Trump veered off in a variety of directions at their press conference. At one point he expanded upon the greatness of his decision to move the American embassy in Israel to Jerusalem. He bragged that he got the cost down to a couple hundred thousand dollars and indicated that he might visit Jerusalem next month. If so, he’ll have a very busy summer. Trump is also slated to visit Great Britain this summer. Maybe he’ll also make a return visit to Paris, where he could enjoy another military parade on July 14 with his buddy Emmanuel Macron.

What Macron and Merkel actually accomplished with their visits to Washington is an open question. Macron got the royal treatment, as it were, from Trump—initially a dinner at Mount Vernon, then the first state dinner of the Trump administration, which was arranged by Melania. For all his efforts to cozy up to the president, however, Macron acknowledged by the end of his visit that he suspects Trump will abrogate the Iran nuclear deal for “domestic reasons.”

Merkel, for her part, indicated that she does not think that the deal does enough to check Iranian ambitions. In her words, “we also think from a German perspective that this is not sufficient in order to see to it that Iran’s ambitions are curbed and contained.” The United States and Europe, she said, should work in “lockstep” on this front. Meanwhile, Secretary of State Mike Pompeo said in Brussels that “there has been no decision made” on retaining or exiting the nuclear deal. He noted, “The president has been clear. Absent a substantial fix, absent overcoming the shortcomings, the flaws of the deal, he is unlikely to stay in that deal past this May.”

If Trump’s week has been focused on foreign relations, he has also been buffeted on the home front. First, there was the flap over Dr. Ronny Jackson, who Trump had named to head the Veterans Affairs agency. After Sen. Jon Tester aired accusations that Jackson had been the “candy man” at the White House, dispensing copious amounts of prescription drugs and allegedly drinking excessively himself, he ended up withdrawing his name from consideration. Trump was livid. On Friday, he called the accusations an “absolute disgrace” and Jackson “an American hero.”

This was a mistake. Trump should move on rather than lingering over his erstwhile protégé’s demise. Trump is exposing himself to unnecessary ridicule and embarrassment. The White House never vetted Jackson. Instead, Trump, as is his wont, went with his gut and picked a favorite to run a massive federal agency. The result was that Jackson nomination flatlined.

Trump also caused himself inadvertent difficulties when he appeared on Thursday on “Fox and Friends.” There he discoursed on a variety of subjects, including his former personal attorney Michael Cohen, whom he suddenly depicted as a marginal figure who had only performed a “tiny, tiny fraction” of work for him. So indignant did Trump become about the Russia investigation that his hosts had to cut him off by declaring that he undoubtedly had a billion other matters that required his attention. The report by the New York Times today that the Russian lawyer Natalia V. Veselnitskaya had closer relations with the Kremlin than she had previously acknowledged has revived the controversy about the famous Trump Tower meeting between her and members of the Trump campaign in June 2016. What it all adds up to, however, is another matter.

For now, it is the future of Korea that could have the biggest impact on Trump’s immediate political fortunes. He declared on Friday, “I want to express my hope that all of the people of Korea — North Korea and South — can someday live in harmony, prosperity and peace, and it looks like it could happen.” If Trump could secure a peace treaty and genuine deal that led to the denuclearization of the Korean Peninsula, he would go down in history as the president who solved a problem that had vexed presidents for decades. For an embattled president seeking a foreign policy success, Korea looks increasingly enticing.