Trump Heading to the G-20: History in the Making? 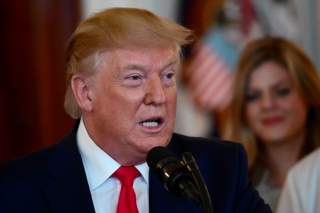 President Donald Trump heads to the G20 summit in Osaka in an enviable position, although amid much controversy over trade and Iran. The reality of his strength and America’s is a world apart from the first G20 summit eleven years ago in Washington, which occurred against the backdrop of the financial crisis and the widely held assumption that China and the rest of the G20 were supplanting the United States.

For this summit, bureaucrats from participating foreign ministries have developed what they believe is an ambitious agenda that includes climate change, “rules-based multilateral trading,” sustainable development, and other frippery to fill out a joint statement at the summit’s end that no one will ever read. The real utility of this G20—indeed of any G20—is the one-on-one and small-group meetings among leaders. With the G7’s descent into irrelevance as it drifts farther from its mid-1970s origins (capitalist nations with the money and will to accomplish real things), the convening function of the G20 is an unexpected if solitary utility of the confab.

The top-billed meeting is the one Trump will have with Xi on the topic of trade. The Chinese originally cast doubt over whether Xi would agree to a meeting and portrayed Beijing’s acceptance as a concession to Trump. In reality, the meeting is a gift to Xi, who botched a trade deal, and who is under considerable pressure from economic and political forces at home.

The Chinese economy is flashing yellow, if not red. Imports plummeted 8.5 percent in May, the prices of certain food items have spiked, and overall economic growth is likely slower than official claims—if the economy is even growing at all. Equally bad for Xi, residents of the one partially free city in China, Hong Kong, have taken to the streets by the millions to protest Beijing’s attempts to undermine their relative autonomy and liberty.

China’s broken promises over Hong Kong serve as a reminder that it is certain to violate any trade agreement with the United States. And even though China’s assistant foreign minister laughably said that, “We will not allow G20 to discuss the Hong Kong issue,” Secretary of State Mike Pompeo has said the United States will raise the matter and protestors in Hong Kong have taken out full-page ads in major legacy newspapers imploring that leaders “Save Hong Kong at G20.” Since crowning himself as China’s paramount leader in 2017, Xi has fumbled repeatedly and arrives in Osaka as the supplicant.

In contrast, Trump has a strong economy and solid political position to bolster his power. Foreign competitors who hoped the Mueller investigation would sideline Trump have been disillusioned, and the experts who assured them that Trump was a temporary phenomenon have been discredited.

While the trade war has had a measurably negative impact on China’s economy, the United States remains a bastion of prosperity and growth. Trump simply doesn’t need a trade deal with China but Xi is under pressure to make one. He still hopes in vain that Washington will accept more worthless promises as it did from China’s 2001 entry into the World Trade Organization up until Trump’s election. Whether the summiteers boast of a breakthrough or a breakdown in talks, an enforceable U.S.-China deal likely will remain elusive until after the U.S. presidential election.

The real work of the summit may be unheralded: a small trade deal that is being negotiated between Japan and the United States without much fanfare. Instead of a far-reaching free-trade agreement, Tokyo and Washington are chipping away at a modest arrangement that could boost U.S. exports of beef and other agricultural goods. They could also find a happy medium on cars and auto parts. Like Trump, Abe is in a strong political position. Trump will see Abe at least twice more this year after Osaka, and Tokyo would like to see a deal completed in that timeframe. Going into the campaign, Trump will have major trade accomplishments with Japan, South Korea, Mexico, and Canada—a giant trade bloc ringing the North Pacific.

Trump will also meet with Putin in Osaka. Officials previewing the meeting forecast an airing of the usual gripes over Ukraine, Crimea, and Moscow’s picayune but annoying election interference. For his part, Putin will blame the United States for Iran’s misconduct and the collapse of Venezuela. Let’s hope the leaders can express their views and then move on to discussing the bigger strategic picture. Moscow and Beijing have been cultivating an alarming number of mutual interests, and even if the two countries cannot be divided, then the United States should accept that it is in its best interest to stop driving them together. Trump seems to instinctively grasp this need. Even a furtive step toward a real dialogue with Moscow would make this G20 uncharacteristically useful.

Christian Whiton was a senior advisor in the Donald Trump and George W. Bush administrations. He is the author of Smart Power: Between Diplomacy and War and a senior fellow at the Center for the National Interest.