Trump-Kim Summit: The Art of Walking Away 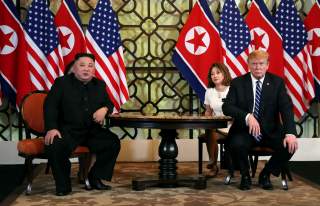 Defying the expectations of his political detractors, President Donald Trump walked away from a bad deal with North Korean leader Kim Jong-un in Vietnam. The temptation must have been great, given the opportunity to distract from the president’s domestic troubles, the sheer amount of political capital he has invested in achieving a breakthrough with North Korea, and his unabashed interest in receiving a Nobel Peace Prize and sealing his place in history. But he correctly followed the maxim that a bad deal is worse than no deal.

The deal breaker in Hanoi was Kim’s insistence that the United States drop a broad swath of sanctions, thereby administering the coup de grace to the “maximum pressure” policy the Trump administration successfully pursued as a means to bring Kim to the negotiating table in the first place. North Korean foreign minister Ri Yong Ho said Kim pushed to lift “sanctions that hamper the civilian economy, and the livelihood of all people in particular,” referring to five of the eleven United Nations Security Council sanctions tranches imposed on North Korea—basically, all UN sanctions not directly related to armaments. But gutting these sanctions would have meant “game over” for U.S. maximum pressure in negotiations with North Korea.

In return, the North Koreans offered only to shutter the nuclear material production facilities at Yongbyon Nuclear Research Center, North Korea’s main nuclear reactor and plutonium reprocessing plant (but apparently not including the experimental light water reactor and possible tritium production facility in Yongbyon). Kim evidently did not agree to close North Korea’s other covert facilities for producing highly enriched uranium—a glaring omission. To put things in perspective, even if Kim had taken that positive step, this would have been far short of the detailed road map to "complete, verifiable, irreversible dismantlement" (CVID) that U.S. negotiators have been pursuing. Overall, the Hanoi Summit may be seen as the latest phase of a familiar historical pattern in North Korean negotiations: an attempt to trade incremental, reversible measures for irreversible concessions by the United States.

Meanwhile, in Hanoi, the United States may have dodged a bullet in form of a declaration ending the Korean War, which has been in a state of suspended animation since 1953. While this falls far short of an official peace treaty, the political theater involved would be tremendous—if, perhaps, not Nobel-worthy. A declaration would help North Korea to control the narrative and generate momentum for sanction-lifting, or at least to stave off further sanction tightening. Political pressure to avoid “provocative” U.S. military cooperation with South Korea would intensify, as would the debate about possible U.S. troop withdrawal. The sense that North Korea is a pariah state, isolated and thwarting the will of the international community, would diminish. So would international support for “maximum pressure.”

Additionally, Trump successfully prodded Kim into speaking positively to the press about establishing reciprocal liaison offices, a modest form of diplomatic representation. This has been something of a U.S. pipe dream since the Clinton administration, which set plans in motion and even designated some personnel. The North already has significant diplomatic representation in the United States through its Mission to the UN in New York, although strict travel limitations mean North Korean diplomats generally cannot make the pilgrimage to Washington, D.C. The United States, meanwhile, is only represented in North Korea by a protecting power, Sweden. A U.S. liaison office in Pyongyang would open the door to new channels of communication and information gathering for the United States, while a liaison office in Washington, D.C. would be only a marginal gain for the North.

In the wake of the collapse of the Hanoi negotiations, a third Trump-Kim Summit now seems remote. That said, Trump’s taking a hard pass on a bad deal was evocative of the failed 1986 Reykjavík Summit between President Ronald Reagan and Soviet general secretary Mikhail Gorbachev. That summit ended when Reagan refused to accept limits on the U.S. Strategic Defense Initiative. However, it proved to be a milestone on the path to the historic Intermediate-Range Nuclear Forces Treaty the following year. It is just possible that Hanoi injected a sufficient note of reality into Pyongyang’s internal deliberations that the North will break with its legacy of stunted, incremental negotiations and return to the table with a more flexible attitude—but it’s not something we should bet on.

Thomas Cynkin is the former United States Charge d’Affaires to the Conference on Disarmament in Geneva.