Trump Leans Toward Qatar in the Saudi Spat 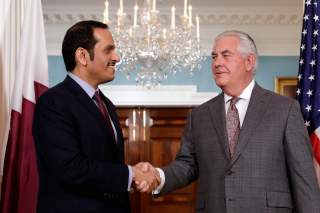 What do superpowers and teenagers have in common? Speaking as a Washington-based foreign policy analyst, and as a parent, I would suggest that each becomes rather frustrated when their friends don’t get along. They likewise have the same broad options in managing this problem—join one side at the other’s expense, drop them both or press the parties to reconcile. January’s U.S.-Qatar Strategic Dialogue suggests that while the Trump administration remains determined to pursue reconciliation, U.S. officials have abandoned what some saw as an earlier tilt toward Saudi Arabia, the United Arab Emirates and Bahrain in their dispute with Qatar. There are good reasons to do so.

In June 2017, Riyadh and its partners cut diplomatic and transit links to Qatar, effectively imposing a blockade. While each of the players has its own narrative about the origins of the crisis, and neither is entirely agreeable to most U.S. observers, their differences center around what many see as the Arab world’s most profound security challenges—the external threat from Iran and the internal threat from (Sunni) Islamist political forces, including the Muslim Brotherhood. At risk of oversimplifying, Saudi Arabia, the UAE and Bahrain prefer to confront them, while Qatar has tried to engage them.

With respect to Iran, Doha has little choice: the two share the world’s largest natural gas field, known as North Field in Qatar and South Pars in Iran. The gas field is at the core of Qatar’s prosperity and, for this tiny nation, its security. Semi-permanent hostility with Tehran would put Qatar’s future at great risk. Under the circumstances, it’s tough to fault the Qatari Emir, Sheikh Tamim bin Hamad Al-Thani, or his country’s government for maintaining a working relationship with counterparts in Iran. Saudi Arabia has no such need to cooperate with Iran’s Shia religious leadership.

Qatar’s interaction with Islamist groups is a more complex matter. Without minimizing the Muslim Brotherhood’s problematic actions and aims, Qatar has effectively made a judgment call about the region and its future, namely, that to the extent that citizens in the Arab Middle East demand greater political roles and rights—something the United States has thus far supported, albeit with mixed success—Islamist political forces will become more important. For a small country in a turbulent neighborhood, the clear policy implication is to engage them. Saudi Arabia has taken the opposite view, not merely rejecting engagement but seeking to shut down groups that could seriously threaten its domestic stability. That Saudi Arabia’s leaders would have this view makes sense considering that their country, with its far larger population, is likely to have a much more difficult time sustaining its wealth-based political legitimacy and, consequently, seems more vulnerable than Qatar to these kinds of internal pressures.

The bottom line is that on both issues—Iran and the Islamists—Qatar and Saudi Arabia have different national interests and, as a result, different policies. Time has exacerbated the problem as Iran’s nuclear ambitions and the nuclear deal, on one hand, and the so-called Arab Spring, on the other, heightened Riyadh’s threat perception even as they pushed Doha further in its own direction. At the same time, as Qatar’s wealth grew, its leaders seem to have developed a greater sense of entitlement to a foreign policy independent from the interests of the Saudi ruling family.

Qatar’s very substantial energy resources make its security strategically important to the United States; over half of the country’s natural gas exports go to U.S. allies in Europe (where Qatar’s gas competes with Russia’s and thus reduces dependency on Moscow) and especially in Asia. However, in a manner that one assumes President Donald Trump would welcome, Doha has been quite willing to use its energy wealth to cover substantial share of the expenses for the U.S. airbase at Al-Udeid, which the Qatari government largely built and recently agreed to expand for the United States, and to buy U.S. military hardware, including thirty-six F-15 fighter jets for about $12 billion. Al-Udeid houses about 10,000 U.S. troops, hosts U.S. Central Command in the region, and supports missions in Syria, Iraq and Afghanistan. Having recently visited the base and met with the American base commander and other top officers (as a guest of the Qatari government, with about a dozen other U.S. experts), I can attest to its vast scale and its essential role in U.S. military operations.

The U.S.-Qatar Strategic Dialogue yielded three bilateral agreements, some of which looked like Qatari efforts to address long-standing American concerns in order to facilitate a U.S. embrace that might deflect some of the pressure Doha faces from Saudi Arabia, the United Arab Emirates and Bahrain. Perhaps most notable from this perspective were what the Department of State described as “Understandings” that would expose and constrain Qatari government subsidies to Qatar Airways, an ongoing target of U.S. air carriers pressing for fair competition.

All in all, however, the most significant outcome of the Strategic Dialogue may well be one that immediately drew the attention of Qatar’s Al-Jazeera network but has yet to receive much attention in Washington. A formal Joint Statement of the Inaugural U.S.-Qatar Strategic Dialogue, a negotiated text endorsed by the two governments, states explicitly that “the United States expressed its readiness to work jointly with Qatar to deter and confront an external threat to Qatar’s territorial integrity that is inconsistent with the United Nations Charter.” A joint statement isn’t a treaty and, as a result, isn’t a legally binding commitment. But this is a clear political declaration that the United States is prepared to defend Qatar against an unprovoked attack—a strong statement in the current context, despite its mild and bureaucratic phraseology.

Secretary of State Rex Tillerson and Secretary of Defense James Mattis did not emphasize this in their public remarks prior to the Strategic Dialogue, though each was likely at least broadly familiar with the contents of the Joint Statement, which was released about six hours later. Tillerson referred to Qatar as “a strong partner and a longtime friend of the United States”; Mattis used almost the same language, calling Qatar “a strong and valued partner” and “a longtime friend in the region.” Tillerson’s counterpart, Foreign Minister Sheikh Mohammed bin Abdulrahman Al-Thani, mentioned the “45th anniversary of the U.S.-Qatar alliance”—a more ambitious characterization of the relationship—and his colleague Defense Minister Khalid bin Muhammed al-Attiyah likewise referred to Washington and Doha as “strategic military allies.” Both Qatari officials are quite sophisticated and impressive and were surely aware of the distinction between their statements and the U.S. language. Still, so long as they do not reflect a dangerous underlying misunderstanding, these differences are entirely within the normal parameters of diplomacy. And the agreed text of the Joint Statement speaks for itself.

All in all, the U.S.-Qatar Strategic Dialogue and the public statements accompanying it were necessary and constructive correctives. Only by clearly and visibly identifying Qatar as a partner and friend can Washington hope eventually to ease the Saudis and others toward some form of reconciliation. The key, of course, is to find a face-saving solution that gives a semblance of symbolic victory to all sides. This will be especially tough in dealing with Saudi leaders, who also face pressure over a less-than-successful war in Yemen, and probably can’t back out of too many such situations too quickly. From this point-of-view, Qatar’s willingness to adjust its own approaches will be important as well; any agreed end to this messy situation will require something from everyone. It’s never easy to mediate disputes among friends, but in this case, the Trump administration seems to have made a good start.

Paul J. Saunders is Executive Director of the Center for the National Interest and a former State Department senior advisor in the George W. Bush administration.