Is Trump Losing Faith in the White House? 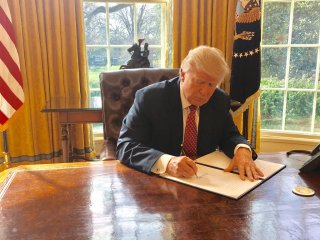 It sounds as though, almost one hundred days into his presidency, Donald Trump may be in something of a funk, at least if his interview with Reuters is anything to go by. “I loved my previous life,” he said. “I had so many things going. This is more work than in my previous life. I thought it would be easier.” He added, “You have such massive protection that you can’t really go anywhere.”

Hmm. On the eve of his much-ballyhooed first hundred days, it’s politically ill-advised for Trump to treat us to his inner reservations about the job. The commander in chief is supposed to be commanding. Trump shouldn’t sound as though he’s raising the white flag of surrender. He’s supposed to be projecting ebullience, vigor, a Jacksonian fighting spirit. You didn’t see Ronald Reagan or Bill Clinton or Barack Obama talking about how overwhelmed they were after a few months in office.

No doubt, Trump observed on Thursday that a “major, major” war with North Korea might be in the offing. But given the number of times that Trump has talked tough, then capitulated to his opponents, on issue after issue—health care, Export-Import Bank, Chinese currency manipulation, NATO, NAFTA, the border wall—his credibility is taking a hit. Add in his record unpopularity as president, and he doesn’t possess much of a cudgel to wield against Congress on domestic legislation. His budget-busting one-page tax plan is stirring up contention within the GOP between deficit hawks and supply-side advocates of growth.

It’s hard to see why the administration, which campaigned on populist themes, is now embracing, among other things, the repeal of the estate tax, which currently allows families to hand down to their heirs up to $11 million, not to mention other loopholes for creating sophisticated family trusts that can also perform an end-run around the tax. The political complexity of tax reform suggests that Trump’s plan is dead on arrival before it has even been fully created.

Maybe this explains why it sounds, in many ways, as though Trump truly is living in the past, cherishing his big victory over Hillary Clinton. During his meeting with the Reuters reporters, for example, he apparently handed out electoral maps of his win in 2016 and said, “It’s pretty good, right? The red is obviously us.”

At the same time, Trump may be a little lonely living in the cocoon of the White House. The Washington Post calls it a “hunger for company.” The other day he spent four hours with Sarah Palin, Kid Rock and Ted Nugent. Nugent said, “The president took us to every room and looked at every painting and talked about every bed and every carpet and every rug and every bulletproof glass.”

The question hovering over Trump is the extent to which his failure to produce legislative successes will impinge upon his and the GOP’s electoral fortunes. It cannot be precluded that Trump himself is enough of a personality to surmount the lack of an actual legislative agenda, particularly since many voters are already so antipathetic to Washington and everything it is assumed to stand for. Indeed, in a lengthy essay in the spring 2017 issue of Political Science Quarterly titled “Trump’s Improbable Victory,” Gary C. Jacobson deftly explains the extent of polarization in 2016, which contributed mightily to Trump’s success. He notes, for instance, that for the “first time in history,” each Senate race was won by the party that earned the state’s electoral votes. It was 82 percent in 2012. “The upward trend is evident,” Jacobson writes, “but the jump to 100 percent in 2016 is still remarkable.”

It is in Trump’s political interest to continue to polarize the electorate. It is on cultural issues that the GOP has focused on in the past—immigration, guns and so on—that Trump can ensure that his base remains loyal to him. Given the stark polarization of the electorate, he may well have a strong political incentive to continue to inflame the cultural divide in America.

What direction Trump will actually head in, however, remains unclear. Maybe he doesn’t know himself. Despite his refusal to attend the annual White House Correspondents’ Dinner, he indicated that his no-show status might well change in the future. Asked by Reuters if he would come next time, Trump was unequivocal: “I would come next year, absolutely.” The only predictable thing about Trump remains his unpredictability.