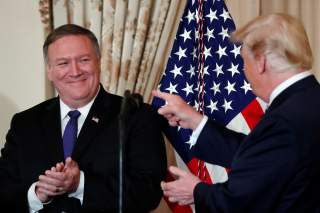 Nearly a year-and-a-half into his administration, President Donald Trump made his first ever visit to State Department headquarters in Washington on Wednesday, participating in the swearing in of his “friend” Mike Pompeo as secretary of state.

It was the culmination of a half-year of intrigue about whether Trump would install Pompeo, formerly the CIA director, to the position. Now the nation’s top diplomat, Pompeo has dived into his work, visiting North Korea and Kim Jong-un before he was Senate-confirmed, and embarking on a Middle East trip this week.

Before his official swearing in Wednesday morning, Pompeo gathered State employees in Washington and addressed them, pledging to reestablish the department’s “swagger.” He also made veiled criticisms of his predecessor, Rex Tillerson, whose personal relationship with the president collapsed, prompting his ouster.

“Mike,” President Trump said. “Has earned my deepest respect and admiration and trust.”

Trump said Pompeo has his absolute “confidence.” He added, in a nod to Tillerson’s short-lived tenure: “And you’ll see why over the coming years.”

It has been a remarkable ascension for Pompeo, a former congressman from Kansas who was not in Trump’s inner circle during the campaign.

Barely on Trump’s radar at the beginning, he has been swiftly elevated since election night 2016—first as CIA director, following a sterling interview with the then president-elect.

At an event at the St. Regis last year, the then-director emphasised that he traveled across the bridge most mornings from the CIA’s headquarters in Virginia to personally deliver the president his intelligence briefing.

The event was hosted by the Foundation for the Defense of Democracies, which has fast become the Trump administration’s go-to think tank on Iran.

In the coming days, Pompeo will lead a national security team advising the president on whether to finally pull out of the Iran deal or not.

Pompeo was formally sworn in by Vice President Mike Pence.

Other cabinet members spotted: Housing and Urban Development Secretary Ben Carson and Health and Human Services Secretary Acosta, among others.

According to the White House, “at least 13” cabinet secretaries attended.

“Mr. President… You have entrusted me with a weighty and awesome responsibility to serve the American people,” Pompeo said.

Pompeo has made a point of trying to buoy the damaged morale of State Department personnel, widely seen as at a nadir following Tillerson’s fraught tenure.

“As I’ve said, and I’ll elaborate more, I want the State Department to get its swagger back,” Pompeo said, in front of a nodding Trump.

“You all know this essential work,” Secretary Pompeo said. “That’s you’re here. It’s why I’m here. I look forward to doing this together. Thank you all so much for the warm welcome.”