A Trump-Modi Relationship Could Change the Trade World 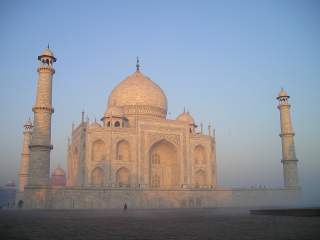 In late January, the leader of the United States, the world’s oldest democracy, and the leader of India, the world’s most populous democracy, shared a phone call. Prime Minister Narendra Modi tweeted about the “warm conversation” while the White House issued a statement, which emphasized that the United States considered India to be “a true friend.” In response, Quartz announced the inception of a “bromance,” further positing that President Trump might be “India’s BFF.”

Cute rhetoric. But there’s real reason to expect that the new administration is prepared to bolster the country’s relationship with India. As such, it’s high time to start thinking about how America should move forward with its eleventh-largest goods trading partner.

Trump’s decision to reach out to Modi, which preceded contact with the head of any major European nation, is significant. It’s hardly surprising that the two are simpatico. They come at each other on equal terms—as unrepentant patriots and guardians of economic national interest. (Trump even adopted a version of Modi’s campaign pledge “This time a Trump government” to appeal successfully to Hindu American voters in a viral video). Trump flipped 217 “blue” counties in the election largely by vowing to put “America First,” which meant, among other things, redrafting and tearing up rotten trade deals. The campaign rhetoric has morphed into a governing principle of “Buy American, Hire American.” In 2014, Prime Minister Modi launched Make in India, an initiative “Devised to transform India into a global design and manufacturing hub.” The next year, India attracted $63 billion and replaced China as the top destination for foreign direct investment. Substantial job creation followed.

Trump, despite having been commander in chief for only a few weeks, has also racked up several notable economic feats. He negotiated with Carrier and Ford to keep thousands of jobs from going abroad. He has also brought foreign business ashore. Cao Dewang, a Chinese auto-glass tycoon, recently announced plans to open a factory in Ohio in October—a $6 hundred million investment. He cited Trump’s threat to declare Beijing a currency manipulator and impose a 45 percent tariff on Chinese imports. And in January, the Dow Jones Industrial Average, responding to the dawning of a pro-business age, hit twenty thousand points for the first time.

In short, the U.S. economy, as well as India’s economy, appears to be on a steep ascent out of the post-2008 global economic hangover. Still, there is tremendous opportunity for both countries to benefit—sometimes simultaneously—from a deepened relationship. Americans who supported Trump for his economic agenda should understand there’s a key difference between multilateral free-trade agreements and bilateral cooperation. The former, precisely because of the involvement of multiple countries with diverse interests and capabilities, inevitably requires some “giving,” usually in the form of jobs. The latter, because one-on-one relationships are far simpler,allows two countries to carefully ensure that arrangements are “win-win.” (The Trump administration readily grasps this, having wisely abandoned the Trans-Pacific Partnership.)

Thus far, there’s been a dearth of creative planning in terms of America’s future relationship with India. I am convinced that, by faithfully adhering to President Trump’s commitment to “fair trade,” the administration cannot only triple its trade with India to $300 billion, but also create one million new U.S.-based jobs through increased trade with India within four years. Here are five steps to realizing that goal:

First, the United States should reduce export barriers to India. It’s a leading producer of items that are in great demand in India. To spur American employment, the United States—as opposed to Russia or China—should be the go-to market. India needs at least $10 billion of liquefied natural gas (LNG) per year, $10 billion of advanced defense equipment per year, and billions of dollars worth of high-tech products. A change in legislation, truly the lowest-hanging fruit, could be taken care of within the first one hundred days.

Third, American energy companies, like Westinghouse, must be able to retrieve revenue from the billions of dollars they invested in nuclear power plants in India after the United States and India signed the civil nuclear agreement in 2008. A plan to do so that Modi and I devised during a congressional visit to India in 2013 stalled due to nuclear liability concerns—and additional orders went to France. It can be revived and brought to fruition with keen leadership in the White House.

Fourth, the United States should encourage the creation of a brand new city in India, an electronics export city, that would resemble Silicon Valley. (The U.S. imports about $600 billion a year from China, out of which $130 billion is in the form of electronic goods.) This city would import billions of dollars, worth of American machinery and technology to produce everything from laptops to inductors.

Fifth, the United States should found the following councils, as permitted by law, to establish the channels and conditions for expanding trade and creating jobs:

• U.S.-India Trade Council. The council would be comprised of CEOs of “India Inc.” and Fortune 1000 companies. It would explore avenues of trade expansion, and then fast-track and implement memoranda of understanding.

• U.S.-India Small Business Council. About 80 percent of all new jobs in both countries are generated by small business. India’s Union Minister for small business, Shri Kalraj Mishra, is already on board with the creation of such a council.

• U.S.-India Defense Council. The council would increase cooperation for the procurement of advanced U.S. weapons.

• U.S.-India Energy Council. The council would explore, assist and facilitate the procurement of American energy, including nuclear and LNG.

• U.S.-India Education Council. The council would explore and expand cooperation between educational institutions in the United States and India.

• U.S.-India Cultural Council. The council would boost cultural ties. Bollywood, a $2 billion industry, already does a lot of its filming in the United States.

• U.S.-India Leisure and Travel Council. The council would expand travel between the United States and India.

With China’s aggressive and open bid to replace the U.S.-devised post–World War II economic and political order, Pakistan’s notably unhelpful role in destabilizing Afghanistan and supporting Islamic extremism, and Russia’s apparent willingness to subvert international norms and sovereignty from Ukraine to Georgia, there is arguably no more important a country in Asia than India. India can be the pillar of an ascendant economic, political and military bilateral relationship with the United States.

Since the end of the Cold War, when India shed its nonaligned status (which in practice meant being pro-Soviet), every president has made an early priority of improving relations with India. And yet, every president has fallen short of putting the U.S.-India partnership on the same level as relations with the European Union, Japan and Australia. It has not been for lack of trying on the American side. Now, with the rise of Prime Minister Modi, the U.S. president finally has a Western-oriented, free-market reformer with whom he can work.

If Donald Trump’s campaign and first weeks in office prove anything, it is that the old orthodoxies and conventional wisdom of the economic, media and foreign-policy elites can and should be challenged. There is no better place to start on the international stage than by conducting a wholesale reevaluation of U.S.-India relations which, if properly calibrated, can be made to serve the interest of job creation here in America.

Shalabh Kumar is Chairman and CEO of Chicago-based AVG Advanced Technologies. He was a member of Trump’s Transition Finance and Inauguration Committee and founding chairman of the Republican Hindu Coalition.