Trump and Mueller Are Headed for a Major Showdown 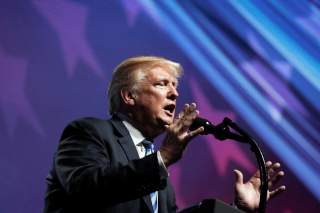 Former Trump campaign aide Michael Caputo emerged from his interview with special counsel Robert Mueller’s team with a warning for the president.

"It's clear they are still really focused on Russia collusion," Caputo said. "They know more about the Trump campaign than anyone who ever worked there."

Sounding as if he had seen a ghost, Caputo drew this contrast with the various congressional investigations into Russian interference in the 2016 presidential election and any collusion with President Trump’s campaign. "The Senate and the House are net fishing," he said. "The special counsel is spearfishing. They know what they are aiming at and are deadly accurate."

That’s a far cry from the repeated assurances, from the White House press shop to the president’s personal legal team, that the Mueller probe is winding down—promises that always sounded more like attempts to calm a frightened child in a passing thunderstorm than a realistic analysis of the Trump-Russia investigation.

So it’s no coincidence that the foremost proponent of the comply-and-it-will-all-be-over-soon strategy of dealing with Mueller, Ty Cobb, was pushed out of the inner circle. What is emerging in its place is a more aggressive and combative but—particularly in the case of the ubiquitous Rudy Giuliani—sloppy campaign at a moment of great legal peril.

The hiring of Emmet Flood, a lawyer who skillfully represented Bill Clinton during impeachment, George W. Bush and Dick Cheney, signals a willingness to deploy more firepower against Mueller. But Giuliani’s PR blitz has been confusing and erratic, potentially exposing the president to greater legal jeopardy.

The publicly available information suggests Mueller does not (yet) have evidence against Trump on collusion. None of the indictments handed down so far even attempt to establish the existence of a broader conspiracy involving the campaign. This includes the charges against George Papadopoulos, a Trump underling who can plausibly be described as having at least attempted to collude, and the Russian nationals, who are not described as having any witting Trump accomplices.

The leaked Mueller questions for Trump are very specific when pursuing obstruction of justice angles. The questions that point to collusion are basic, sometimes open-ended and not especially accusatory. There have been multiple reports that Trump is not yet a target in the investigation, and while that can obviously change at anytime, if there was concrete proof of collusion Mueller would not need to interview the president in order to change his status.

Mueller is also clearly taking the investigation in other directions. The Michael Cohen/Stormy Daniels situation threatens to create all kinds of new problems for Trump. So could poking around the president’s businesses, which are undeniably shady. But when the Whitewater investigation started to be about sex, it ceased to be about a land deal. That could be true in the Trump-Russia investigation too.

There have been some insinuations that former Trump campaign chief Paul Manafort and his unsavory connections may eventually become an important part of the collusion narrative. But so far, the actual charges against him don’t have anything to do with the presidential campaign.

All that comes with some important caveats, however. First, we don’t know everything Mueller knows. Even the more innocuous leaked questions could be inviting Trump to contradict what other witnesses have already told investigators. Mueller could be proceeding carefully. And there is no indication Mueller considers the collusion matter closed—in fact, most signs point in the opposite direction.

At best, Mueller has not reached any definitive conclusions about Trump and collusion. For all these reasons, the House Intelligence Committee Republicans’ exoneration of Trump was premature.

Why does it matter? Trump is unlikely to be indicted as a sitting president. Impeachment is the remedy for anything untoward Mueller uncovers, and Trump’s removal from office hinges on whether that includes anything that would persuade a critical mass of Republican senators to vote to convict him.

Obstruction of justice will be good enough for the Democrats, which puts Trump at risk of impeachment if they retake the House in the November elections. But without some underlying involvement in the stealing of Democratic e-mails or the deployment of Russian social media trolling, it will be hard to get Republicans to go along with it—unless the election results lower their threshold of Trump tolerance, and with it the burden of proof they will require of Mueller.

So far, Trump’s attacks on Mueller, Deputy Attorney General Rod Rosenstein and even Attorney General Jeff Sessions do seem to be moving the needle with Republican base, if no one else. Important conservative lawmakers in the House have turned against Sessions and Rosenstein. Republicans running in competitive primaries frequently compete to defend Trump from Mueller. Trump gets cheers from conservative audiences when he decries the “witch hunt.”

That doesn’t mean Trump can’t be goaded into doing something that is a bridge too far for Senate Republicans. And if the Giuliani show can’t be cleaned up factually, it could wind up creating more legal problems than it solves.

But Trump and Mueller are building up to a consequential and potentially presidency-altering showdown.