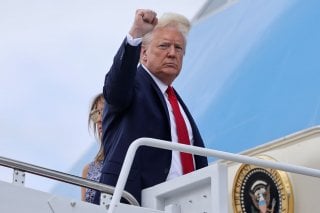 Republicans had a virtual monopoly on the White House from 1969 until 1993, with only a four-year interruption following Watergate. By the end of that era, New York City had elected a tough-on-crime Republican mayor, too. The riots of the Lyndon Johnson years and the subsequent wave of crime that peaked only in 1991 were powerful incentives for voting GOP. The rioters who have run wild since the killing of George Floyd by a Minneapolis police officer are likewise an incentive for law-abiding Americans to re-elect Donald Trump this November. Over 30 cities experienced rioting and disruptions on Friday evening.

Nothing makes the divide between the two political parties more clear than the fundamental issue of law and order. Democrats are busily making excuses to exculpate the rioters. Trump failed to address the issue at his Rose Garden press conference on Friday, but he cannot go wobbly. He must insist that upholding the law and the safety of American citizens is the paramount obligation of his administration.

His rival, Democratic nominee-to-be Joe Biden, is in a bind. Biden was a co-author of the 1994 crime bill. He had the smarts to abandon his party’s history of coddling criminals. Bill Clinton did, too: he took time out from campaigning for the Democratic nomination in 1992 to return to Arkansas for the execution of a murderer named Ricky Ray Rector. Centrist Democrats like Clinton and Biden went out of their way to distance themselves from the image of Michael Dukakis, their party’s 1988 nominee, as a bleeding-heart liberal who brought bloodshed to innocent Americans by letting the likes of Willie Horton out of prison.

But today the left-wing, activist base of the Democratic Party, some of which appears to be out on the streets this week, demands the abolition of bail, the release of masses of convicted criminals from prison, and greater constraints on police. Democrats in New York’s state legislature have pursued this agenda aggressively, eliminating cash bail for misdemeanors and non-violent felonies—with the result that before the lockdown New York City saw crime shoot up by 22.5 percent compared to February 2019. New York Governor Cuomo and New York City Mayor De Blasio have admitted the problem. But liberals in their party’s base are not giving up. And when incidents like the killing of George Floyd occur, a liberal narrative within the party is reinforced by the nation’s liberal-leaning media: racism is a greater problem than crime, and police are a big part of the racism problem. In the past week, liberal pundits and academics have even gone so far as to justify the riots in Minneapolis and elsewhere, arguing that riots historically produce reforms and anyway, what’s a little arson and looting compared to a man’s death in custody?

The immigrant businessmen whose shops have been ransacked amid the violence might feel differently. As might Americans who look at what the liberal approach to policing has produced less than 40 miles away from the nation’s capital, in Baltimore. Following the death of 25-year-old black man Freddy Gray in police custody and the violent protests that took place afterward, Baltimore police scaled back their activities, and the murder rate reached levels last seen in the early 1990s. As voters look to November 2020, they might wonder whether the reduction in crime achieved over the last 25 years is at stake in President Trump’s re-election.

Adding to the angst for Biden are the backgrounds of two of the women he has been considering to be his running mate. Minnesota’s own Senator Amy Klobuchar could have been a smart pick to guarantee the Gopher State to the Democrats and help with the ticket’s chances in Wisconsin and Michigan. But before being elected to the Senate, Klobuchar was a county prosecutor, and her record in dealing with cases of alleged police brutality is now under fire. California Senator Kamala Harris is also a former prosecutor, though as a black woman she more strongly satisfies the party’s diversity requirements. If she were Biden’s pick, she would have a balance to strike between portraying herself as tough on crime and sympathetic to the liberal narrative about the protests. She could easily alienate voters on both sides of the question—as could Biden himself, as he tries to triangulate between his record on crime and his party’s present drift toward demonizing police.

At the end of Barack Obama’s years in office, liberal hostility toward law-enforcement and images of rioting and unrest everywhere from Baltimore to St. Louis to Dallas added to the momentum of Donald Trump’s campaign. Now history is repeating, and not only the history of 2016 but also the history of the Republican Party’s advantage in the 1970s and ‘80s with voters who perceived the Democrats as too liberal to uphold law and order. Trump has wavered on this issue only to start coming down harder against the rioters across America’s cities who are creating mayhem. He must not flinch—or risk his conservative base. It’s time for Trump to run against Biden on a traditional Republican law and order campaign to stop the new round of American carnage.

Daniel McCarthy is the editor of Modern Age: A Conservative Review, and Editor-at-Large of The American Conservative.