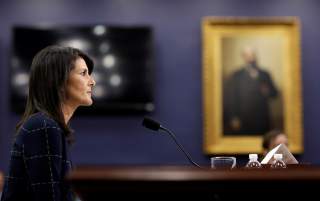 Donald Trump’s formal recognition of Jerusalem as the capital of Israel complied with a 1995 act of Congress and fulfilled a promise made by each of the last four U.S. presidential candidates. Internationally, it did not play well.

The Palestinians condemned the decision, saying it destroyed “any possibility of a two-state [solution).” They proceeded to rally opposition in the UN. The United States vetoed a critical Security Council resolution, but the General Assembly subsequently voted 128 to nine (with thirty-five abstentions and twenty-one countries not present) to condemn the decision.

Last month, prior to the General Assembly vote, Ambassador Nikki Haley warned that the United States would be “taking names” of countries voting in favor of the resolution.

At the UN we're constantly asked to do more and give more—in the past we have. So, when we make a decision, at the will of the American people, about where to locate OUR embassy, we don't expect those we've helped to target us. On Thursday there will be a vote at the UN criticizing our choice. And yes, the U.S. will be taking names.

The vote exposed two problems that frequently coincide: (1) U.S. aid recipients often take—without repercussions—positions contrary to those taken by the United States in the UN and (2) Palestinians frequently use the organization to harass and isolate the United States and Israel.

The resolution deploring U.S. recognition of Jerusalem as Israel’s capital was only the latest example of this phenomenon. Just a month earlier, for example, the General Assembly voted 191 to two to condemn the “economic, commercial and financial embargo imposed by the United States of America against Cuba.”

This is commonplace, more than a vote here and there. On overall non-consensus votes in the General Assembly, voting coincidence with the United States has averaged only 34.5 percent since 1983, the first year the State Department reported on the matter. Voting coincidence with the U.S. exceeded 50 percent only three times: in 1995, 2011 and 2016.

Major recipients of U.S. assistance are among the least supportive voters. Why is the United States so frequently unable to convince governments that receive millions or billions of dollars from us to support our priorities in the UN?

In some cases, the United States simply does not try very hard to convince them. After all, General Assembly resolutions are nonbinding. Most have little to zero practical impact in the world outside of Turtle Bay.

But sometimes, the United States cares deeply about the result and tries to convince countries to vote with us. This is most likely to happen when votes involve sensitive political issues or international agreements and financial matters within the authority of the General Assembly. In fact, U.S. law requires the State Department to file an annual report to Congress on voting in the UN that identifies “votes on issues which directly affected important United States interests and on which the United States lobbied extensively.”

In 2016, there were fourteen such “important votes.” The United States was in the majority on nine of them. Of the five that we lost, three involved issues related to the Palestinians.

Shifting votes on controversial issues in the General Assembly is difficult. It’s a hotbed of peer pressure and transactional politics. Countries know from experience that, if they support regional or ideological group positions, those governments will in turn support them in matters they care about.

They are less certain about the ramifications of voting against the United States. Historically the United States has not consistently rewarded countries for their support, nor withheld assistance in response to opposition. As a result, many countries believe that they can oppose American priorities and initiatives without consequences.

This is particularly the case with votes on Palestinian matters.

Since the 1990s, according to the Congressional Research Service, the United States has given the Palestinians $5 billion in bilateral economic assistance and support. It has supported the UN Relief and Works Agency for Palestine Refugees in the Near East (UNRWA) to the tune of $6 billion.

Despite this support, the Palestinians have repeatedly walked away from peace negotiations, refused to recognize Israel’s right to exist as a Jewish state, instigated violence against Israel, and used the UN to attack and harass Israel by, among other efforts, working to pass three times as many General Assembly resolutions condemning Israel and the rest of the world’s countries combined.

The sad truth is that, over the past two decades, the United States has established a pattern of funding the Palestinians regardless of their intransigence and provocations.

Contrary to the wishes of multiple American administrations, the Palestinians continue their effort to achieve recognition absent a peace agreement with Israel by seeking membership in international organizations and accession to multilateral treaties. They also use international organizations like the ICC, UNESCO, and the Human Rights Council to isolate, harass, and condemn Israel. Why change their behavior when they believe that there will be no diplomatic or financial repercussions?

If the Trump administration wants to succeed in brokering a peace deal, this pattern must be broken. The Palestinians must understand that U.S. support is contingent on their commitment to peace negotiations.

The current dispute over UNRWA funding within the administration presents an opportunity for the United States to clarify the situation. UNRWA was established more than sixty years ago as a temporary initiative to address the needs of Palestinian refugees and facilitate their resettlement and/or repatriation. It has become a permanent institution providing services to multiple generations of Palestinians, a large majority of whom live outside of refugee camps, enjoy citizenship in other countries, or reside in the Palestinian-governed territories. Meanwhile, the Palestinian refugee problem has ostensibly grown larger, in part due to UNRWA’s applying refugee status to the descendants of the original Palestinian refugees. UNRWA has employed individuals affiliated with the Palestinian Islamist extremist group Hamas and its facilities have been used to house rockets and Hamas tunnels. On top of everything else, a UN audit concluded that UNRWA was vulnerable to “misappropriation, graft and corruption in procurement, partner selection, food and cash distribution, hiring and promotions, and other areas.”

Leaving aside the Palestinian-Israeli peace process, the United States should withhold contributions to UNRWA until it implements critical reforms. In the medium term, Washington should seek to eliminate UNRWA, shifting responsibility for recent Palestinian refugees resulting from the war in Syria to the United Nations High Commissioner for Refugees. We should also demand that the Palestinians assume responsibility for the services provided by UNRWA. That’s what sovereign governments are expected to do, and the Palestinians aspire to become a sovereign state.

Are there risks to this policy? Of course, but risks are also inherent in adhering to the same policies that have led to the deeply unsatisfactory, insecure status quo. Presidents Clinton, Bush, and Obama all failed in their ambition to negotiate a peace between the Palestinians and Israelis. Success hinges on the Palestinians understanding that there is a cost to their intransigence.

When Ambassador Haley announced that the United States was taking names, she implied that there would be consequences for voting against the United States and rewards for supporting America. President Trump followed up and made clear that voting for the condemnation would affect U.S. decisions to provide foreign assistance:

Let them vote against us; we'll save a lot. We don't care. But this isn't like it used to be where they could vote against you and then you pay them hundreds of millions of dollars and nobody knows what they're doing.

America’s influence is due in no small part to the belief of other governments that the Trump administration will follow through on its promises. Failing to follow through will undermine U.S. credibility in Turtle Bay and around the world. Not every UN vote is important, but if the United States wants to influence important votes in the future, it needs to do more than take names.