America's Strategic Partnership with India Is about More than Afghanistan 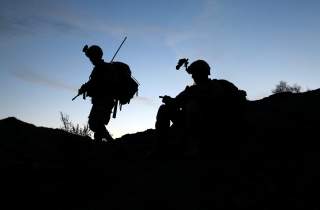 In the process of making his case for America’s commitment to Afghanistan, President Donald Trump called for a strategic partnership with India. He is absolutely right about that, but as he allowed in the speech, the need is bigger than a common vision for Afghanistan. It is just as important to integrate India into a strategy capable of addressing broader region concerns and to house it in an institution capable of incorporating the views of America’s other allies and friends. To this end, the United States and India should work together to reinstate the quadrilateral security dialogue (or “quad”).

The truth is, as serious as American and Indian interests are in Afghanistan, the longer-term, more difficult, more consequential challenge is the rise of China. President Trump is right to focus on the global terrorist threat that could once again emerge from the Af-Pak region. The United States cannot allow Afghanistan to again become a lawless safe haven for terrorists able to wreak destruction half a world away. But as much as 9/11 and America’s (and its allies’) response to it changed the world, the rise of China as a major economic, political and diplomatic power—with its own ideas about the international order—will have an even farther reaching, deeper impact.

The Afghanistan and China challenges differ greatly in their nature. Afghanistan is about managing downside risk. Trump’s vision about how to go about this is remarkably realistic. Nation-building is out. Trump identified America’s goals as “attacking our enemies, obliterating ISIS, crushing Al Qaeda, preventing the Taliban from taking over Afghanistan, and stopping mass terror attacks against America before they emerge.” If we accomplish these things, whatever else may happen in Afghanistan, we win.

China, by contrast, offers a mix of downsides in areas such as the freedom of the seas with upsides, particularly when it comes to economy. At the same time that the Chinese military is active along India’s northern border, physically disputing Japan’s rights to the Senkaku Islands and squeezing Taiwan out of its already limited international connections, it is spending a trillion dollars on global infrastructure needs. Even as it bullies its neighbors diplomatically in South Korea and Southeast Asia, its trade advantages there are growing. And while it may demur in taking sufficient action to check North Korea’s nuclear programs, it eagerly helps to finance America’s prodigious borrowing habits.

To deal with a challenge such as China, to maximize the upsides and minimize the downsides, the United States and India need to look at it together on a regular and structured basis, and from the many different angles it presents. As treaty allies of the United States whose relationship with the U.S. military is far more developed than India’s, Japan and Australia must be involved at the core of this conversation. This is the quad. Other occasional participants could include South Korea, the Philippines, Sri Lanka, Indonesia, Malaysia, Vietnam, France, the UK, or Germany. This diversity is important because even as the quad discusses its approach to China, it would benefit from exposure to the views of other countries with stakes in managing China’s rise and/or the wherewithal to help manage it.

And the extent to which they appeal to that neighbor is dividing it. Unlike President Duterte and some of his advisers, the military and many of the foreign-policy elites want as little to do with the Chinese as possible. The former see the upsides, the latter the downsides. I saw a similar divide on a visit to Vietnam. There, the Party has unique obligations to its counterpart in Beijing while the foreign ministry better reflects Vietnamese traditional wariness of China.

Such dilemmas and divisions are common throughout the region and beyond. The stakes for all concerned are high. And so a new effort at a quad must find a way to incorporate them, lest it contribute to an order with thin support and staying power.

This leads to the question of where China fits into the quad. After all, it is China’s objections that have stymied it for ten years. It was attempted once in 2007 and then halted when the Australians pulled out in deference to Chinese complaints. Today it is the Indians who are proving to be an obstacle.

There are a couple good reason why this is the case. One, India shares a long border with China, which remains unsettled in a couple critical places. This vulnerability, recently exposed in the standoff over Doklam, makes India wary of provoking the Chinese. Its border disputes with China are very real, while a diplomatic initiative like the quad is not so concrete. Two, India was burned in 2007 when the Australians killed the quad off. Even if India could be convinced to complicate their border situation with the Chinese, they would not want to take that risk, only to be left holding the bag again.

The quad could plow ahead anyway. With enough cajoling and accommodation of India’s strategic interests—the references to Pakistan in Trump’s speech are a good start—India might agree. But the most enduring way to proceed would be the quad to engage China. To address reasonable Chinese concerns and neutralize unreasonable ones, officials should share with the Chinese the assessments resulting from their discussions. It could be done through the myriad of dialogues each already has with Beijing, or it could be done as an extension of the quad-dialogue proceedings. This would offer Beijing opportunities to clarify its intentions and fill in gaps in understanding about its military’s posture and capabilities in a confidential and constructive environment. If they decline, the challenge is too great not to press ahead, but the door should be left open.

The threat from Afghanistan is strategically very straightforward. The task of dealing with it can be boiled down to several concrete desired outcomes, as President Trump did in his speech. Broader U.S.-India strategic interests—especially involving China—defy such a tidy formula. The phenomenon of China’s rise is too big and complex, and it is with us for good. It requires an ongoing, multifaceted dialogue among the countries most affected and/or in position to contribute to solutions.