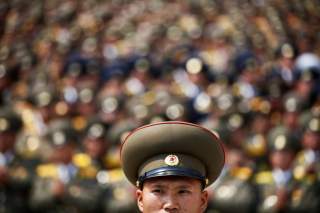 It’s Springtime, and on the Korean Peninsula diplomacy is in full bloom, replacing, for the moment, the bellicosity of Fire and Fury and regime change.

The surprise Xi-Kim Summit has set the stage of the April 27 North-South Summit and a subsequent Trump-Kim Summit in May. Even Japan’s Prime Minister Shinzo Abe is trying to arrange a Summit with Kim. At a time of promising diplomatic breakthroughs, the still mysteriously absent critical agenda setting and policy questions must be addressed in Seoul and Washington. The challenge now is to test Kim’s promising rhetoric about dismantling North Korean nuclear weapons.

President Moon has tied progress in South-North relations to progress in DPRK-U.S. efforts at denuclearization. But Moon’s focus is Korea-centric—aimed at advancing reconciliation through enhanced social, economic interaction and the building of a “peace regime.” It remains unclear if denuclearization will be on the agenda. The policy challenge for Seoul and Washington will be to effectively tie South-North reconciliation to U.S.-DPRK denuclearization. This will require diplomacy of a high-order. White House fears of a flawed North-South accord helps explain why Trump threatened to put the KORUS trade accord on hold.

At the Blue House, preparations for the April 27 Summit are operating at a level beyond “Close Hold, Top Secret.” Few in the ROK government outside of a handful of Blue House senior advisors are privy to planning. While a breakthrough toward some form of loose political association is a long-shot, U.S. policy should be prepared for South-North communique that would state Pyongyang’s offer of a nuclear and missile freeze as a first, interim step toward denuclearization. This would leave Seoul and Pyongyang setting the table for the Trump-Kim Summit and the Northeast Asia security agenda.

As these two summits approach, there are some important “do’s” and “don’ts” that should inform policy and diplomacy in Seoul and Washington.

The first is to strictly adhere to the diplomatic doctrine of “No Surprises.” Policy coordination is critical to avoid landmines that could reverse momentum and move the peninsula back toward tension and confrontation.

The second is to have North Korea define exactly what it means by denuclearization. It will be no small task for intelligence and think-tank analysts to unpack Kim’s statements in Beijing on the nuclear question:

“The issue of denuclearization of the Korean Peninsula can be resolved if South Korea and the US respond to our efforts with good will, create an atmosphere of peace and stability, while taking progressive and synchronous measures for the realization of peace.”

Kim’s statement reeks of stale, loaded formulations from North Korea’s diplomatic playbook; namely that all things are possible if the United States concludes a peace treaty with the DPRK, ends the U.S.-ROK alliance and leaves the peninsula. What U.S. response would “create an atmosphere of peace and good will” sufficient to resolve the nuclear issue? What “progressive and synchronous measures for the realization of peace,” does Kim seek? Declare of peace treaty and end the U.S.-ROK alliance? And what denuclearization steps would he take in response?

The third is: be prepared to address issues related to a likely “freeze as first step to denuclearization” gambit. Admittedly, from an “America First” perspective, a freeze on ICBM testing might not be a bad deal; for U.S. allies in the ROK and Japan it would not be a very good deal, leaving them exposed to the DPRK’s inventory of IRBM and short-range missiles. It could also raise questions in Seoul and Tokyo of U.S. confidence in its missile defenses—deterrence by denial. At the same time, missile discussions must include a framework for reductions of DPRK medium and long-range missiles, potentially linked to U.S./ROK reductions in missile defense—based on the principle “No Missiles; No Missile Defense.”

The White House unrealistically prefers a Libya-type scenario—Kim, tell us where your nukes are and we’ll fly in planes to collect them; Seoul is more sympathetic to Kim’s hope for a “phased” approach, beginning with a nuclear freeze.

But there is a way to bridge this gap. Both Seoul and Washington need to make clear that a freeze—unless accompanied by anywhere, anytime, no advance notice, intrusive IAEA inspections and visible first steps of dismantling the DPRK’s ICBM facilities and nuclear infrastructure is a recipe for déjà vu, simply repeating the mistakes of agreements past. Policy will need to avoid a “Past as Prologue” dynamic in which Pyongyang pockets gains from an interim freeze, finds a pretext to halt the process and ultimately, forces all to accept it, like Pakistan, as a nuclear power and undercuts the NPT.

This gets us to “synchronous steps.” Where do we start? Do we start from blank slate or use the 2005 six-party text as the starting point for negotiating the scope and pace of a comprehensive solution? It is important to recall that the 2005 Joint Statement was based on the assumption of profound and well-earned mutual mistrust—that continues to mark relations. Nevertheless, the agreement offered Pyongyang all it could want: energy assistance, economic aid, security guarantees, U.S.-DPRK normalization leading to a peace treaty—all sequenced on “action-for action” progress in dismantling the DPRK nuclear arsenal. Hopefully, without mentioning the Six party agreement, this is the reference point of Kim’s remarks.

And finally, what of a peace regime and the signing of peace treaty to replace the armistice? Chinese President Xi Jinping has suggested to Trump that they should negotiated a peace treaty with the two Koreas. But on what basis?

Previous North-South summits produced only humiliating failure, despite Seoul lavishing economic benefits on Pyongyang. Again, to avoid starting from a blank slate, the 1992 Agreement on Reconciliation, Non-aggression, and Exchanges and Cooperation between the South and the North offer a comprehensive set of confidence-building measures that, if implemented, could yield a true state of peace and an actual peace regime. This would open to door for the conclusion of a peace treaty, one that would include the ROK as a signatory and be the end state of measure to demilitarize the conflict, not a Kellog-Briand-like Peace Treaty, a hollow piece of paper. This would be true test of Kim Jong-un’s commitment to peace on the peninsula.

There is a compelling need for the United States to rapidly launch a dialogue with China and ROK in regard to an agenda on missiles (not addressed in previous nuclear agreements) and the basis and process for denuclearization diplomacy. The past is littered with failed deals with North Korea. In the cases of both North-South diplomacy and U.S.-North Korean denuclearization efforts, there is a rich legacy of well-conceived agreements left gathering dust as a result of North Korean obstinacy.

Solving all these mysteries of how to get from the present to a peaceful and denuclearized Korean Peninsula should get someone the Nobel Peace Prize. But learning the lessons from twenty-four years of failure is an essential place to begin. It is still worth heeding the philosopher George Santayana’s warning: “Those who do not learn the lessons of history are condemned to repeat it.”

Robert A. Manning is a senior fellow of the Brent Scowcroft Center for International Security at the Atlantic Council and its Foresight, Strategy and Risks Initiative. He served as a senior counselor to the undersecretary of state for global affairs from 2001 to 2004, as a member of the U.S. Department of State Policy Planning Staff from 2004 to 2008, and on the National Intelligence Council Strategic Futures Group, 2008–12. He tweets at @Rmanning4. James Przystup is a senior fellow at the National Defense University’s Institute for National Strategic Studies. His views are his own and do not reflect that of the U.S. government.