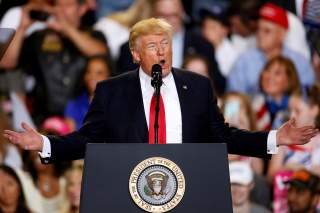 Proponents of stronger U.S.-Africa relations seemingly had much to celebrate in September. At a working lunch with African Leaders, President Donald Trump lauded Africa’s “tremendous business potential,” and highlighted a compact signed between Côte d’Ivoire and the Millennium Challenge Corporation (MCC) that promises to improve access to secondary education and infrastructure. The president’s comments came hot on the heels of Undersecretary of State for Political Affairs Tom Shannon’s speech at a United States Institute of Peace symposium in which he affirmed that African affairs “touch U.S. interests” globally. Both Trump and Shannon emphasized that African leaders should make deeper commitments to solving the continent’s security challenges, but also reassured those present that U.S. support in the region would remain strong.

While these statements are certainly welcomed by African leaders and U.S. policymakers, there has been little evidence that the Trump administration plans to seriously engage Africa politically or economically. Trump has yet to nominate an assistant secretary of state for African affairs, and AFRICOM’s role has remained unchanged except for a general increase in Special Forces raids. As Chinese economic and political ties across Africa grow, increasingly stagnant U.S. policy towards the continent threatens to undermine both American and African interests. The Trump administration has the opportunity to revamp this state of affairs before it’s too late.

Economic engagement with Africa has remained largely unchanged since the George W. Bush administration. While, as Ahmed Charai previously wrote in these pages, “Americans enjoy the potential to enter the continent en masse—in business, civil society and security—and trump other powers in both scope and esteem,” no administration in the past few decades has mobilized such an effort. The MCC’s compact with Côte d’Ivoire that Trump referenced is indeed a promising initiative, but the investment is ultimately modest and the country is just one of fifty-three African nations. The last major piece of U.S.-Africa trade legislation, the African Growth and Opportunity Act, was signed in 2000 and is not set for reevaluation until 2025. The only new idea from the Trump administration, repealing the provisions designed to prevent the trade of conflict minerals by executive or legislative means, threatens to harm African economies and stability more than help.

By contrast, Chinese economic engagement with Africa has exploded in recent decades. According to a report from the McKinsey Global Institute, “No other country matches this depth and breadth of [economic] engagement.” Africa-China trade has grown by 20 percent annually, and foreign direct investment has grown 40 percent. There are roughly ten thousand Chinese firms in Africa, which account for 12 percent of the continent’s industrial production and half of internationally contracted construction projects. This expansive growth has resulted in hundreds of thousands of jobs for Africans.

Trump has formulated little policy in regards to Africa, even when presented with the opportunity to combat terrorism. A potential watershed moment, whether to lift sanctions on Sudan, was postponed due to lack of scrutiny on the issue. Not making a decision was the worst outcome for Trump: maintaining the sanctions would have reaffirmed U.S. commitment to human rights in the face of Sudan’s ongoing conflicts in Darfur and beyond, while lifting sanctions would have signaled to potential regional partners that the United States is willing to reward cooperation in combatting terrorism.

While PR events like the working lunch and symposium show that the administration is willing to pay lip service to deepened US-Africa security cooperation, that cooperation may not be forthcoming. Trump’s proposed budget would significantly cut foreign aid to Africa. U.S. Ambassador to the UN Nikki Haley has focused on Africa only to applaud funding cuts to peacekeeping operations. Trump’s chilly response to France’s initiative to form a “G-5 Sahel” of African Nations to cooperate on counterterrorism in Northwest Africa further demonstrates little interest in the continent’s affairs, even when doing so would have furthered his goals to combat terrorism and encourage local partners to pull their own weight.

Meanwhile, China’s economic engagement has quickly evolved a military dimension. Although historically unwilling to deploy peacekeepers, China is now the largest troop contributor in the P5, and has sent troops to nine UN missions across Africa in recent years, especially to regions where Chinese economic interests are at stake.

A conventional Chinese military presence in Africa soon followed. It opened its first overseas military base in Djibouti last April and conducted live-fire drills there in late September. The base will, according to China, provide a springboard for Chinese naval assistance in anti-piracy operations and future peacekeeping operation on the continent.

While the benefits of Chinese engagement in Africa are readily apparent in the form of employment and infrastructure, China’s presence is ultimately a bad alternative to U.S. engagement both for American interests and Africans themselves. China’s willingness to offer massive “no-strings attached” loans may create economic activity in the short-term, but could lead to problems for African countries as they struggle to pay back loans negotiated to favor Beijing. Kenya recently spent $4 billion, financed by Chinese loans, on a new railroad from Nairobi to Mombasa. The Kenyan government promises the loans, which “pushed the Kenyan debt above 50 percent of output,” will be paid back in four years, a claim that many find dubious. At the individual level, Chinese companies often restrict management positions for Chinese nationals and mistreat African workers, leaving little opportunity to advance into the middle class.

Worse still for the average African is Chinese willingness to send arms to authoritarian regimes. London-based Conflict Armament Research group published several reports documenting Chinese weapons and ammunition in Sudanese hands, including a previously unseen type of armored vehicle. These weapons and ammunition not only exacerbate the conflicts in Sudan, but find their way to the conflicts in neighboring South Sudan and the Central African Republic. The influx of weapons exacerbates conflicts that lead to severe human rights abuses and prolong the rule of authoritarian governments.

For Americans, growing Chinese-African cooperation leads to undesirable diplomatic outcomes, notably deeper ties between Africa and North Korea. Namibia, a country so distant from American notice that Trump inadvertently referred to it as “Nambia,” hosts a North Korean arms factory and contracts North Korean firms for state construction projects. Namibia is not unique, a UN investigation earlier this year revealed North Korean shipments of military equipment to Eritrea, the DRC, Mozambique and others. As China is North Korea’s advocate on the global stage, its deepening ties with Africa may further encourage commerce with North Korea, in violation of the UN sanctions regime.

Trump needs to go all-in on Africa. Doing so will benefit him in a number of ways. Firstly, it is a means to stymie China, a country that Trump frequently attacked on the campaign trail, without deteriorating the security situations in either North Korea or the South China Sea. Secondly, substantial engagement with Africa will promote a number of friendly democratic regimes, which could prove useful partners and allies as China becomes a global player. Finally, the risk of terrorism will be reduced as U.S. engagement helps African states develop more effective security sectors.

While the United States may have been able to evade substantive cooperation with Africa in the immediate post–Cold War era without much consequence, it cannot afford to continue keeping the continent at arm’s length. Trump needs to start a new chapter of U.S.-Africa relations that offers Africans and Americans alike a brighter future.

Marcel Plichta is a postgraduate student at the University of Glasgow. His areas of study include African security and Africa-China relations. He has previously written for Small Wars Journal, Istituto Affari Internazionali and International Policy Digest.