Trump and Putin: Populists of a Feather? 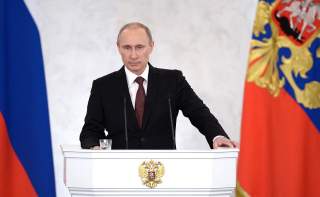 To what extent does the rise of populist forces around the world benefit Russian president Vladimir Putin? Many right-wing and nationalist parties sweeping across Europe have proven more pro-Russian than their mainstream counterparts. They see Putin as an ad hoc ally in their rebellion against the liberal and globalized world order, while Putin sees them as an opportunity.

Contrary to popular belief, the Russian president is no fan of populism. His support for populist parties in Europe and the United States is simply opportunistic: he will seek to bolster their chances, if they can fracture support for mainstream parties that tend to view Russia as a threat and the transatlantic bond as vital for countering it. His support is a pure calculation in order to survive.

Nowhere is the rise of populism more consequential for Russia than in the United States. But will Trump’s populist flair and desire to shake up the Washington establishment benefit Putin in the long run?

Despite Putin’s support for antiestablishment forces abroad, he stands as a bulwark against populism at home. For Putin, populism is the “headless chicken” that destroyed the Soviet Union, unleashing unprecedented and uncontrollable political and economic forces for which no one was prepared.

“There is this myth that Putin is a populist,” says Greg Yudin, Professor of Political Philosophy at Moscow School of Social and Economic Sciences. “Populist leaders adore connecting with people and can spend hours talking to them. . . . Putin’s regime is the opposite: he famously avoids public politics and refuses to take part in the debates.” Furthermore, populism typically encourages political activism and mobilization among its supporters, whereas Putin’s regime relies on a total lack of mobilization and does not encourage activism.

Putin is also portrayed as a leftist populist and Robin Hood figure, because of his alleged desire to make life better for Russia’s poor. But the facts say the opposite: Russia has staggering inequality, where 7 percent of the population owns 71 percent of the wealth. “Putin built a system that has super rich elites on top who cautiously look down the masses. Their biggest fear is a popular revolt,” concludes Yudin.

Last but not least, populists target the power of elite establishments. In Russia, Putin is the establishment. This February, prominent Russian think tank Minchenko Consulting hosted a two-day seminar for politicians and spin doctors, titled “Elections, Victory and Big Data: Win Like Trump and Putin.” One of the topics was “How to Neutralize the Populist Wave: Strategies of Protection for the ‘Ruling Party.’” This is an indicator that current Russian elites are not applauding the spread of populism. Rather, they are studying it, in case it creeps into Mother Russia.

Trump differs greatly from Putin on the populism scorecard. Throughout the 2016 presidential campaign, Trump identified himself as a man of the people by challenging political elites—even those in his own Republican party. When reflecting on the campaign, Democratic senator Charles Schumer said, “Donald Trump ran as an anti-establishment populist—against both the Democratic and Republican establishments.” His election represented the first time since Andrew Jackson that a populist-leaning candidate has reached the White House.

According to Leon Wieseltier, a senior fellow at the Brookings Institution, in a recent interview, “Populism maintains a radical preference for direct democracy, and for removing mediating institutions that stand between a leader and his people.” In this sense, Trump’s “I alone can fix it” dogma aligns closely with populist doctrine. Wieseltier adds that Trump’s rhetoric posits a “direct relationship between the people, as if there exists such a uniform entity, and the leader—a relationship is thwarted by all the mediating structures of politics and government.” In other words, the state itself is the obstacle to the people.

Trump’s chief strategist Steve Bannon is also a clarion voice for populism within the administration. Bannon’s February speech at CPAC, in which he stated Trump’s desire to “deconstruct the administrative state,” echoes the populist disdain for institutions of government.

While there are many examples of President Trump’s populist tendencies, one must look no further than Trump’s inaugural address to find a true populist manifesto. In it Trump exclaimed, “Today we are not transferring power not from one administration to another, or from one party to another, but we are transferring power from Washington, D.C., and giving it back to you, the people.” “It was a doctrinal definition of populism,” said Wieseltier. This vision however, “starkly contravened the vision of the Founding Fathers, who preferred compromise to unanimity and believed that direct democracy was the same as mob rule. The genius of the Constitution lay precisely in its belief that mediation was the surest path to justice.”

This vision is far from what Putin promotes in Russia. Russian pundit Gleb Kuznetsov believes that the Kremlin looks at U.S. populism through the eyes of cynical opportunists. “Trump is the fourth U.S. president for Putin and most likely not the last. Putin has seen U.S. presidents make plans to improve things with Russia and then watch these plans go in flames. The Kremlin allows state propaganda to build a positive image of Trump, but in reality, Russian elites are watching and waiting,” says Kuznetsov. At worst, Trump’s victory is a sign that anything is possible, and that one day Russia too may experience its own “black swan” political catastrophe.

Given the vast differences in their domestic ideologies and agendas, what is the real potential for cooperation (or lack thereof) between the United States and Russia under Trump and Putin?

What Can Trump Offer Putin?

While Trump regularly mentioned “new deals” with Moscow during the campaign, there are four general concerns in the Russian capital regarding Trump’s operating style. First, there is a worry that Trump’s unorthodox modus operandi will create legal hurdles for his policies (as we have already seen with his twice-rolled-out travel bans). Second, Putin—who worships a centralized state machine where professional technocrats do their daily jobs—also has reason to believe that Trump’s populist tactics, outsider political appointees and haphazard communication style might affect his efficiency.

Third, the nature of U.S. political debate, in which anything related to Russia becomes instantly contested, gives little hope for an early grand bargain. The Kremlin understands that “Russia” has become almost a toxic buzzword in Congress, as Trump has incited pushback from Russia hard-liners In early February, a group of eight Republican lawmakers wrote a letter to President Trump urging him to take a “results-oriented, but tough-minded and principled policy toward the Russian Federation.” Lastly, Moscow fears that Trump has found credible opposition in the intelligence community. And if any capital knows what an internal war with intelligence might mean, it is Moscow.

So far it is unclear whether the United States will be a partner or an adversary for Russia. Initial enthusiasm in Moscow for Hillary Clinton’s defeat has given way to uncertainty about where the White House is heading on its Russia policy. Eyebrows raised when White House press secretary Sean Spicer called on Russia to return Crimea, which is a nonstarter in Moscow. Other members of Trump’s cabinet have come out firmly in support of a strong NATO and against Russian aggression in eastern Europe. National Security Advisor H. R. McMaster’s outlook toward Russia also serves as a course correction from the overly pro-Russia orientation maintained by Mike Flynn, Trump’s previous and short-lived national security advisor.

However, Trump’s lack of criticism directed toward Putin is a breath of fresh air to a Kremlin that is frustrated over continued isolation from what it views as a hypocritical West. To borrow an expression used recently by Russian pundit Gleb Pavlovsky, Trump appeared to promise “the return of the future” for Putin. At minimum, this involves the removal of sanctions (since one cannot be on a global elite list and on the sanctions list at the same time) and for the world to get over Russia’s annexation of Crimea.

What Can Putin Offer Trump?

To be fair, Trump’s early embrace of possible cooperation and an easing of tensions with Russia was also attempted by his predecessors. George W. Bush partnered with Putin on counterterrorism measures and on the war in Afghanistan. Obama sought to “reset” relations with the former Cold War foe. Yet increasingly divergent views on how to maintain regional and global stability drove bilateral relations to their lowest point in twenty-five years.

On a personal level, Trump appears to be an admirer of Putin’s “strongman” leadership in Russia, a persona that Trump has sought to project at home. On U.S. foreign policy, Trump looks to cooperate with Russia on fighting the Islamic State in Syria and to weaken Russia’s diplomatic and military ties with Iran. On a geostrategic scale, Trump may be looking to align with Russia to challenge China’s growing influence—economic and military—in Asia and elsewhere.

On these issues, the United States needs to be wary of miscalculating power balances and intentions. In Syria, Russia has, for over a year and a half, directed its military operations toward bolstering the Assad regime against rebel groups, and not just bombing ISIS targets. Attempts to sever Russia’s relationship with Iran will also prove difficult, given their cooperation (albeit complicated) in Syria. Russia also began supplying weapons systems, such as the S-300 antiaircraft missile system, to Iran following the lifting of UN sanctions in 2016.