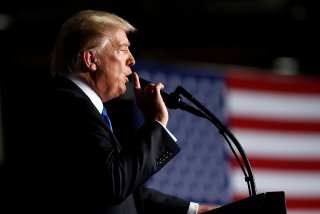 President Donald Trump came into office with a promise of putting America first in his foreign policy. The announced plan for Afghanistan and the region makes it look like he is serious in delivering on that commitment. Still there is much more on the president's to-do list.

What our president meant when he promised to put “America First” was not isolationism or going it alone in the world. He meant he would put the interests of what's best for Americans as the first measure of good foreign and defense policy.

He certainly seems to have held good on that promise so far. He reaffirmed the U.S. commitment to NATO which is crucial to the stability of Western Europe. He took the fight to ISIS in the Middle East. Trump stood tough against North Korea. Now he has chosen to stick it out in Afghanistan.

There are two U.S. interests in the country that make an American effort worthwhile. First, it is in America's interest to keep Afghanistan from becoming a source of regional instability. Second, as a matter of self-preservation we should work to prevent the country from being used as a platform for transnational terrorism.

The president's strategy looks reasonably designed to achieve both of those goals—sustaining an effort that could well last over the next seven and a half years of a Trump presidency.

Still, now that the White House has settled on a suitable and responsible strategy, the tasks of the Oval Office are far from over. There are several top issues that the administration needs to settle in short order.

Next, Trump needs to flesh out, before November, a long-term plan for dealing with Iran.

The Oval Office must settle on the rest of its Middle East strategy. This includes dealing with ISIS 2.0, al Qaeda affiliates, our policy towards the hot spots of Syria, Yemen, Libya, and Somalia, as well as keeping countries like Tunisia, Lebanon, Jordan, and Iraq stable.

Additionally, the White House needs to round out its effort to defeat transnational criminal networks rooted in Central America.

Our president must also circle back to Western Europe, mapping out what comes after reassuring NATO. More NATO expansion? Trade? Russia? The INF treaty?

And then there is filling out the white space in how the United States will compete with China over the long term—not just in the South China Sea, but in the Indian Ocean and along the Belt and Road.

Further, the White House needs to fill out its political team so that the president can implement the agenda he will put in place over the next few months.

Finally, Trump still has to deliver on the promise of rebuilding a “peace through strength” military.

After the speech the only advice I have for the president is get back to work—there is so much more foreign and security policy to be done.