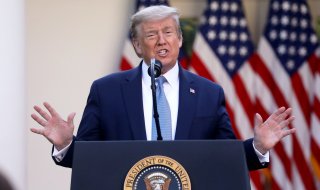 Last week, a funny thing happened amid America’s full-court press against the coronavirus: the White House declared war on one of its most significant tools of public diplomacy.

The April 10 edition of the 1600 Daily, the Trump administration’s dedicated newsletter, included a broadside aimed squarely at the Voice of America, arguably the U.S. government’s most prominent and influential news outlet. “Voice of America is a global news network funded by American taxpayers. It spends about $200 million each year on its mission to “tell America’s story” and “present the policies of the United States clearly and effectively” to people around the globe,” the missive said. “Today, however, VOA too often speaks for America’s adversaries—not its citizens.”

The charge, coming as it does in a time of unprecedented national crisis, seems extraordinary. But in truth, it is nothing new. The Trump administration has long chafed at a public diplomacy apparatus that, while nominally a part of the federal bureaucracy it inherited in January of 2017, has all too often proven itself to be aloof and unaccountable. The situation has become all the more problematic because repeated attempts at reform—from the installation of a new CEO to plans to overhaul the constituent services that make up the U.S. Agency for Global Media (USAGM)—have been thwarted over and over by savvy politicking and bureaucratic maneuvering.

In the meantime, U.S. public broadcasting has languished. In recent years, the USAGM has come in for extensive criticism for, among other things, skewed priorities in its outreach to Iran, internal corruption and mismanagement, and a failure to provide much-needed political balance in its reporting on hostile regimes. The coronavirus crisis, however, seems to be the straw that broke the camel’s back.

The White House has charged that the Voice of America “amplified Beijing’s propaganda” about its role in the spread of the disease while whitewashing the People’s Republic of China’s complicity in the pandemic. And at long last, the White House seems prepared to do something about this institutional drift. On April 15, President Donald Trump signaled that he was prepared to install Michael Pack, his administration’s nominee to head the USAGM, in an acting capacity to jump-start an overhaul of the agency.

Predictably, partisan political lines have been drawn over the issue, with opponents of the president rallying behind VOA and its embattled director, Amanda Bennett, while others decry the administration’s efforts to short-circuit Congress, where Pack’s nomination has languished for more than two years. Yet their objections ignore a larger problem, which the administration’s offensive is intended to address.

Today, the United States faces a changed—and deeply challenging—media environment. The past few years have seen the advent of a new phenomenon which could be called “authoritarian media,” entailing the weaponization of news, both real and fabricated, by hostile actors in order to advance a concrete set of foreign policy and national security objectives.

This new challenge encompasses not just Russia, which meddled extensively in American politics in the run-up to the 2016 election (and which continues to spread disinformation with the goal of destabilizing democratic institutions in the United States and Europe). It also includes countries like Iran, Turkey and Qatar, each of which has erected a formidable media apparatus designed to promote its state ideology and objectives—and denigrate everyone else’s. And, of course, it involves China, which has long sought to manipulate global public opinion in its favor, and whose efforts to obscure the truth regarding its responsibility for the spread of the coronavirus have done massive harm to the world.

In this environment, the U.S. government desperately needs a dependable, robust public diplomacy bureaucracy in order to properly promote its ideas, explain its policies, and convince global audiences to rally to its side. For years, the USAGM and its component parts have fallen conspicuously short of that objective, as a result of which America’s image—and its international influence—have suffered.

At long last, however, the White House seems prepared to do something about it.

Ilan Berman is Senior Vice President of the American Foreign Policy Council in Washington, DC. He is the editor of Digital Dictators: Media, Authoritarianism, and America’s New Challenge (Rowman & Littlefield, 2018).