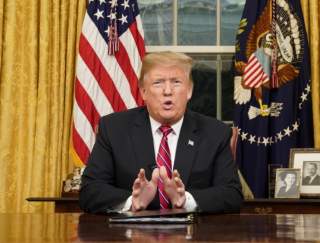 Amid a government shutdown and risking defection from the hardline right on his hallmark political issue, President Donald Trump addressed the nation from the Resolute Desk Tuesday night. He made clear he’s willing to extend this present showdown still further.

“Day after day, precious lives are cut short by those who have violated our borders,” Trump said. “How much more American blood must we shed before Congress does its job?”

Trump appeared to clearly signal that he, indeed, remains committed to keeping the government shut down “for months or even years,” and, under pressure from the Right, that he will reject most political trades being discussed in Washington—most notably, a so-called wall for DACA deal.

“For those who refuse to compromise in the name of in the name of border security, I would ask, imagine if it was your child, your husband or your wife whose life was so cruelly shattered and totally broken,” Trump said.

The president was lauded by longtime supporters who have criticized him in recent weeks over his failure to implement of a border wall, almost two years into his administration. Ann Coulter, who has pressured the White House away from immigration compromise before, said: “Beautiful speech. Call Congress and ask your representatives to fund the wall.” But if Republican senators, including West Virginia’s Shelley Moore Capito and Alaska’s Lisa Murkowski, defect from his line, as they appear to be doing, it will become extremely difficult for him to hold to it.

A Trump 2020 campaign official said: “Net win.” A source close to Trump’s orbit argued that the president’s frequent use of “illegal alien,” a term the previous administration was loath to employ, bore the fingerprints of Trump consigliere Stephen Miller, who oversees speechwriting in the West Wing.

The president’s choice of a primetime national address had been much maligned by many in the political establishment.

A similar address given by then-President Barack Obama in 2014 was not carried by most major networks, as Trump’s was. Trump often issues video messages from the White House, but has been more gun-shy than other presidents to use the bully pulpit of the primetime address to whip support on a political issue. “A fine speech that vastly exceeded the ridiculously low expectations created by the media,” said Rich Lowry, editor of conservative mainstay National Review, which has been oft-critical of the president.

Of course, the content of Trump’s address—a clear, immigrationist restrictionist message—remained deeply divisive on an increasingly crucible issue in American life. The Democratic Party wants the government reopened—now. “Separate the shutdown from the arguments over border security," said Senate Minority Leader Chuck Schumer, appearing in a joint response with House Speaker Nancy Pelosi. "There is bipartisan legislation—supported by Democrats and Republicans—to reopen government while allowing debate over border security to continue.”

The leadership duo rejected the president’s assessment that the situation on the U.S. Southern border is a “crisis.”

“President Trump must stop holding the American people hostage, must stop manufacturing a crisis and must reopen the government,” said Pelosi.

Piling on were many potential 2020 contenders, as well as stars of the new Congress.

Rep. Alexandria Ocasio-Cortez questioned the need for the main federal immigration enforcement agency, ICE, at all. The “Abolish ICE” movement has gained currency in many of the New York social circles she now represents in the House and on social media. “The president should be really defending why we are funding [ICE] at all,” Ocasio-Cortez told liberal heavyweight Rachel Maddow. “Right now, what we are seeing, is death.”

“There's no crisis at the border,” said Sen. Bernie Sanders, also rejecting the president’s characterization. Sanders, a political independent who caucuses with the Democrats, delivered an individual response of his own, separate from Schumer and Pelosi, as he has before on similar occasions, such as the State of the Union. “President Trump, you want to talk about crises?” said Sanders. “30 million Americans have no health insurance… Climate change threatens our planet… 40 million are dealing with outrageous student debt.”