Trump Reboots to Confront the Coronavirus 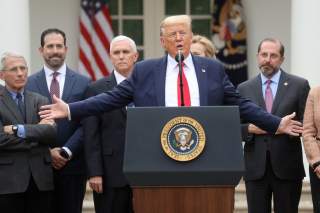 It was a somber Donald Trump who spoke at the White House today to declare a “national emergency” and that “we’re doing a great job.” Gone was his language about exaggerated fears and a “hoax” surrounding the coronavirus. His own daughter, Ivanka, stayed home rather than visit the White House because of her exposure to an Australian official who has the coronavirus.

Not only was the shift in tone marked, but Trump also referred constantly to the numerous public health experts and corporate CEOs flanking him as he faced the biggest crisis of his presidency. Dr. Anthony Fauci indicated that the coronavirus may remain virulent for another eight to nine weeks: “I can't give you a number. It depends how successful we are.” Trump himself sought to convey confidence by emphasizing that his administration had moved quickly to impede the spread of the coronavirus, including quickly ordering travel bans. How effective will his emergency declaration prove?

The most important thing that the administration can do is work to remove the uncertainty surrounding the extent of the spread of the virus. Until there is more clarity, economic activity will be hobbled as investors and businesses retreat from incurring any additional risk. In this regard, Trump’s decision to announce an emergency was a case of better late than never. Failure is not an option. Left unchecked, the worst-case estimates are that the coronavirus could kill up to 1.5 million people and turn America into Italy writ large. Writing in the Washington Post today, the Italian journalist Monica Maggioni underscores just how grim that prospect would be: “I find myself confined in a place where time is suspended. All the shops are closed, except for groceries and pharmacies. All the bars and restaurants are shuttered. Every tiny sign of life has disappeared. The streets are totally empty; it is forbidden even to take a walk unless you carry a document that explains to authorities why you have left your house. The lockdown that began here in Lombardy now extends to the entire country.”

Some of the most important pledges Trump made were that he would offer up to $50 billion in federal funding to states to battle the coronavirus. He indicated that hospitals can now “do as they want. They could do as they have to.” He added, “I’m urging every state to set up emergency operations centers effective immediately.” He indicated, in response to a question after his opening statement, that he himself would undergo a coronavirus test, something that he had previously resisted. Trump also said that up to five million tests would be available by the end of the month—a lofty goal. The danger for Trump is that, as is his wont, he is overpromising. Still, the move to establish drive-thru testing at places like Walgreens and Walmart parking lots makes good sense. Trump’s weakest moment by far came when he responded to a question about the lack of testing that until now has badly hampered efforts to stop the virus—“No, I don’t take responsibility at all.”

To help prop up the economy, he indicated that government purchases for the strategic reserve would be increased. Wall Street responded positively to Trump’s remarks as the stock market rose, ending up almost two thousand points on Friday. But Trump also pooh-poohed a multi-billion dollar bill backed by House Democrats to address the coronavirus crisis, remarking that they “are not doing what’s right for the country.” Among other things, it does not include the payroll tax relief that Trump is supporting. House Speaker Nancy Pelosi is vowing to vote on the bill.