Trump Is Right About Saudi Arabia 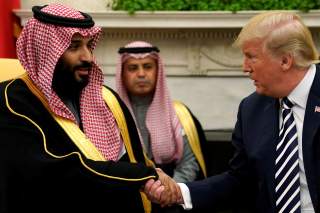 The meltdown over President Donald Trump’s decision to stick with Saudi Arabia despite a human-rights tiff was predictable if melodramatic.

Senator Bob Corker, the outgoing anti-Trump chairman of the Senate Foreign Relations Committee, said “I never thought I’d see the day a White House would moonlight as a public relations firm for the Crown Prince of Saudi Arabia.”

Not to be outdone, Joseph Cirincione, the president of the globalist Ploughshares Fund, said the statement “raises serious questions about the President’s fitness for office.”

And a representative of the left-wing Human Rights Watch said the decision “isn’t just immoral, it’s reckless and will come back to haunt and hurt U.S. interests.”

What the human-rights crowd—suddenly loud and proud after eight years of silence under Obama and his drone wars—has sought would have fundamentally hurt American interests.

At its heart, the Khashoggi affair is about the killing of someone who was not, at that point, a U.S. citizen in a country over which the United States has no jurisdiction. True, Khashoggi was an opinion writer and analyst for the Washington Post. At the Washington Post he wrote such gems as “The U.S. is wrong about the Muslim Brotherhood,” which the newspaper published not only in English but also Arabic. Many Arab governments make no distinction between the Brotherhood and Hamas, and view both as terrorist organizations.

There can be no doubting that Khashoggi’s murder was a heinous crime. The Trump administration has moved decisively to hold Saudi Arabia accountable. President Trump himself addressed the matter publicly on several occasions, entertaining the possibility that Saudi Arabia’s influential crown prince was personally involved. Secretary of State Mike Pompeo traveled to Saudi Arabia to confront the Saudis directly. And then the administration sanctioned seventeen Saudi nationals for their suspected involvement in the killing.

Of course this is not enough for those who have gotten up on their high horses. They demand an end to arms sales to Saudi Arabia and a forced end to the war in Yemen, presumably on terms favorable to the Iranian proxies there whom Saudi and other Arab states are fighting, and who occasionally rain down ballistic missiles on Riyadh. It’s quite easy to be high-minded from the safety of Washington and New York.

In the real world, the conduct of the Saudis is startling but far from unique. Among other U.S. allies, Turkish president Tayyip Erdogan, who scored diplomatic points against his regional rival over the Khashoggi killing, has dozens of journalists and political opponents rotting in his jails. Philippines president Rodrigo Duterte wholeheartedly endorses extrajudicial killing by police. And among U.S. adversaries, journalists and other opponents of governments like those in China and Iran have short life expectancies.

The breakdown of relations that the critics of Saudi Arabia now seek, and which Trump firmly rejected with his statement of support for the alliance with Saudi Arabia, is not a novel concept. There’s even a clear example in the Middle East. In response to human-rights violations by the Shah of Iran, then-President Jimmy Carter went wobbly on his support for the Iranian monarch in 1979. The move helped usher in the Iranian Revolution and the Islamic Republic, which to this day throws political opponents in Evin Prison in Tehran and executes gays by hanging them from construction cranes. Oops.

More to the point, Iran challenges U.S. interests around the Middle East. In effect, we are still dealing with the consequences of high-minded but dumb decisions that created today’s Iran.

One country that stands against Iran’s ambitions is of course Saudi Arabia. Each year, it spends about $70 billion on defense, which, for example, is more than three times what Israel spends. Riyadh is also poised to buy $20 billion of American defense goods.

Most importantly, by keeping a working relationship with Saudi Arabia, we can retain influence and urge the country down its own path of reform. While this process has recently manifested itself in headline-catching moves like finally letting women drive, the biggest opportunity is having Saudi Arabia halt its historical support for Wahhabism abroad. It’s no secret that Saudi-funded schools and mosques as far away as Indonesia have brought with them radical Islamist clerics. The Saudi government has promised Trump to change this activity, which is nearly as important to long-term U.S. security as thwarting Iran.

In the end, Trump made a decision to put U.S. interests ahead of the passions of a moralistic chattering class that has no idea about how to defend America. Trump does.