Trump Should Access Hollywood to Gain Leverage over China 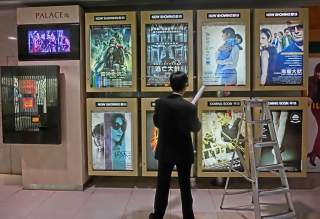 When it comes to negotiating with China, President Donald J. Trump and his team have the opportunity to use an underappreciated leverage point: the desire of Chinese audiences for American films.

If you’ve wondered why blockbuster films in recent years have featured international casts shot in scenes increasingly filled with effects, explosions and grandly staged car races in exotic locations, the answer is China. While the moviegoing audience and box office revenue in the United States has stagnated, China continues to grow by leaps and bounds—and Chinese audiences love American movies.

Sadly, the number of films that can actually access the Chinese marketplace is severely limited. Thanks to a deal struck in 2012, China has restricted access to the second largest box office marketplace in the world to a mere thirty-four foreign-made films, and restricted the United States’ share of revenue to 25 percent. China has the most movie theaters in the world— surpassing the U.S. last November—but the number of American-made films Chinese audiences can see legally is severely limited and subject to government approval. And that deal came only after the World Trade Organization chided China for unfair practices.

Despite these restrictions, films made in America have been enormously successful in the Chinese marketplace. Some of these are movies that barely resonated in American markets, such as 2015’s Warcraft, 2017’s Resident Evil: The Final Chapter and xXx: The Return of Xander Cage. But the most prominent success story has to be the Fast and Furious franchise, which has managed to achieve success with audiences in both America and China through a combination of fast cars, jaw-dropping set pieces, and rock-’em-sock-’em fun. The most recent entry in the franchise, The Fate of the Furious, set a new record for an opening weekend in China with $192 million—while just 20 percent of the film’s opening weekend haul came from domestic ticket sales.

One thing Hollywood is learning about Chinese audiences is that they love these speed and special effects films more than they do films that read as not-to-subtle nationalist propaganda. The Great Wall, an American and Chinese joint production starring Matt Damon, was a disappointment in both the United States and China.

That’s why, now that the movie quota is subject to renegotiation, the Trump administration has an opportunity to take a hard-line stance on the need for an open marketplace and a rollback of censorship restrictions to open up China to everything American filmmakers have to offer—not just from Hollywood, but from New York and Georgia, the number two and three filmmaking states.

The Trump administration should insist on eliminating—or at least dramatically expanding—the current film quota. It should also guard against a situation where films made by American-based companies which are owned by Chinese conglomerates count against any negotiated quota.

As companies like Wanda Group expand into Hollywood the potential exists to artificially crowd out American-made films. Wanda Group owns Legendary Pictures, co-producers of films like Jurassic World, Godzilla and Kong: Skull Island, as well as AMC Entertainment, the largest theater chain in the world. Chinese companies could potentially shift Hollywood production jobs to China. For example, in October Wanda Group officially unveiled Wanda Studios Qingdao, a more than four-hundred acre studio and production facility built on an artificial island. Above the fifteen soundstages where Legendary’s Pacific Rim 2 is being filmed, there is a Chinese-character sign on the side of the mountain that reads “Movie Metropolis of the East.”

The United States should welcome China’s arrival in the moviemaking business, but not with unequal access to America’s respective marketplaces. As it stands, Chinese companies can make as many films as they want and release them to an American marketplace protected by the First Amendment and without censorship from the Trump administration or anyone else. There is no Chinese equivalent for American audiences of actor Richard Gere, who says he has been blackballed into the indie movie circuit because of his views on Tibetan freedom.

Silicon Valley and the technology community have already learned the perils of negotiating access to the Chinese marketplace while meeting government censorship demands. The United States should be careful before agreeing to a regime that can diminish expressions of American values in film. Instead, the United States should push to increase the variety of films available to Chinese audiences.

Former Connecticut Senator Chris Dodd, now the chairman of the Motion Picture Association of America, alluded to this carefully in recent remarks at the Beijing Film Festival. “The Chinese are a sophisticated audience—they appreciate great diversity in films,” he said to his Chinese audience. “They welcome the opportunity to have a variety of products come to their country, to challenge their thinking, to inspire and stimulate them as an audience.”

At the end of the 1940s, the Supreme Court broke up the old Hollywood studio system because of the monopoly of product and ideas that it created, and the monopolistic anticompetitive practices that prevented new and different films from having any opportunity to compete. American audiences have reaped the benefit of competition in Hollywood. Now China’s audiences want to buy tickets to American-made films. The Trump administration should insist they can.

Benjamin Domenech is publisher of The Federalist.