Trump Should Avoid Believing the Myths of the JCPOA 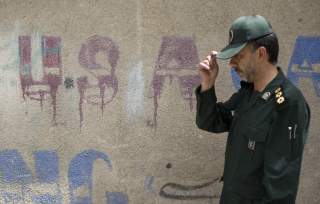 President Trump’s recent presidential “decertification” of the nuclear agreement with Iran—the Joint Comprehensive Plan of Action (JCPOA)—has reignited the debate over its merits. As a result of President Trump’s move, Congress is now tasked with determining the critical next steps on whether or not to reimpose sanctions on Iran. Last month, Senator Bob Corker released a statement, calling for a bipartisan effort toward “fixing the Iran deal.” These assessments of the Iran nuclear deal as being flawed are centered on two myths: (1) the JCPOA contributed to more aggressive Iranian regional behavior; and (2) the agreement’s sunset clauses diminish its current value.

Regarding the first myth, many in Washington argue that JCPOA unleashed Iran on the region, and that the Obama administration held back its responses to avoid jeopardizing the negotiations and ultimate deal. However, a closer examination of recent regional developments since the JCPOA reveals a different picture. The changing scope—the increasing influence and involvement—of Iran in regional affairs is unrelated to the JCPOA. If anything, the JCPOA shifted Iran’s foreign-policy strategy in a less assertive direction, since Iran acted more aggressively to garner more leverage throughout nuclear deal negotiations. The U.S. response to Iran is also better explained by changes in U.S. strategy.

With the Obama administration, U.S. grand strategy shifted its focus toward Asia before the negotiations ever got underway. Moreover, President Obama was interested in avoiding escalating conflict and war as well as decreasing U.S. involvement in the Middle East due mostly to the domestic political environment with an American public growing more and more weary of U.S. interventions in the Middle East. Despite Trump’s tough rhetoric (he has repeatedly stated that he does not want to start another war in the Middle East), and though he would be loath to admit it, on this point, his inclinations are much closer to President Obama’s than they are to George W. Bush.

The second myth about the JCPOA involves the so-called “sunset clauses.” Critics of the agreement including members of Congress argue that the sunset clauses are major flaws of the deal, because some restrictions on Iran’s nuclear program are gradually lifted—mostly ten to fifteen years after the initial implementation of the deal. These critics claim the agreement is “bringing Iran to the brink of nuclear breakout,” and they argue that the JCPOA does not go far enough and that its provisions should be permanent. But the lifting of these restrictions is not imminent; it is eight years or more in the future, in 2025, which raises the question: What is so pressing today that is worth dismantling a deal that gives all parties eight to ten years to debate issues regarding lifting of restrictions and find a solution?

We should remember that the JCPOA, by design, was not a treaty or a deal to guarantee security for all, and for all time; it is not war settlement or a border agreement. Rather it is a delicate and detailed technical agreement. In fact, one of the main purposes of this agreement was to allow all parties the opportunity to build mutual trust and enhance dialogue, so that when necessary, new (or old) worries and concerns could be negotiated, leading to potential additional agreements in the future. The theory underlying the JCPOA is incrementalism. Having established some level of mutual trust and understanding between parties, more, not fewer, options become available; in other words, at a minimum, the United States will have the same set of policy options in ten years as available today, “informed by a decade of inspections,” as pointed out by former Obama aide Ben Rhodes in a recent interview. Conversely, redefining the terms of the JCPOA carries consequential costs—show of bad faith—which inhibits the possibility of future agreements on additional restrictions because the credibility of the agreement has been undermined.

Apply the same concept in our daily life, say, after we just signed a ten year loan contract: How would we feel if the bank would come back after two years, asking to double the interest rate, or extend/reduce the terms of the loan until further notice, or . . . Not only would we be reluctant to accept those terms, we would perhaps never do business with that bank again, because of the exhibited bad faith and loss of credibility.

For Trump to exhibit true mastery of the “art of the deal,” he should follow Ronald Reagan’s advice about the importance of building incremental trust and progress with the United States’ principal adversary at the time, after ratifying the historic arms reduction treaty. “Improvements represent only the beginning of a long, difficult road to better understanding and cooperation,” he said. “We are ready to continue moving along this road.”

“Important differences remain between our countries and will continue for years to come. But I am confident that we have been witness in 1988 to progress that, if we are careful and diligent, can continue next year and during the years to come,” Reagan added. What was true then for U.S. efforts to pursue security through arms control with the Soviet Union also holds true today in the case of U.S. interests toward Iran’s nuclear program. We should embrace the fundamental merits of the JCPOA, and not be distracted with myths.

Mahsa Rouhi is a postdoctoral fellow with the International Security Program and Project on  Managing the Atom at Harvard Kennedy School’s Belfer Center for Science and International Affairs.

Image: A member of Iran's Revolutionary Guard walks past anti-U.S. graffiti as he arrives to attend a ceremony to mark the death anniversary of the Islamic Republic founder Ayatollah Ruhollah Khomeini at a mosque in northern Tehran June 2, 2008. REUTERS/Morteza Nikoubazl (IRAN)