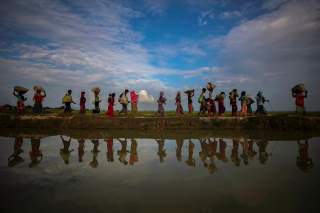 In an August 2018 report on atrocities committed in Myanmar, the U.S. State Department found that: “The recent violence in northern Rakhine State was extreme, large-scale, widespread, and seemingly geared toward both terrorizing the population and driving out the Rohingya residents. The scope and scale of the military’s operations indicate they were well planned and coordinated. In some areas, perpetrators used tactics that resulted in mass casualties, for example, locking people in houses to burn them, fencing off entire villages before shooting into the crowd, or sinking boats full of hundreds of fleeing Rohingya.”

It is time for the United States to formally declare Myanmar’s Rohingya campaign a genocide. It is not simply a moral imperative, but a strategic imperative for an administration whose foreign policy has frequently been called into question. Since being forced to flee to Bangladesh in 2017, the world has watched the plight of the over seven hundred thousand Rohingya refugees with concern, and condemned the Myanmar government’s brutal military campaign that drove them out as well as the government’s refusal to ensure safe return and accountability. This came to a head in the most recent United Nations report on the situation, where UN investigators described the military campaign as one driven by “genocidal intent” and called for the prosecution of the generals responsible for genocide. In response, the International Criminal Court has stated that the court has jurisdiction to do so and the UN’s Human Rights Council has overwhelmingly voted in support of creating an independent mechanism to expedite criminal prosecutions.

The United Nations’ 1948 Genocide Convention officially defines genocide as an act aiming to destroy, in whole or in part, a particular group. Such acts can include killing members of the group, causing serious bodily harm to them, trying to impose unlivable conditions on them, preventing births in the group or forcibly transferring children of that group. The international community is coming to the realization that the plight of the Rohingya is just such a situation, and, as stipulated in the State Department report, we could draw that conclusion as well.

Against this backdrop, the U.S. response has fallen flat, and it has been left out of a leadership position that it would benefit from seizing. When presented with the opportunity to do so in the report, the United States failed to do so. Likewise, during his speech at the UN General Assembly, President Donald Trump rightly called out the horrific situations in both Syria and Venezuela, but remained silent on the plight of the Rohingya. The decision, at least in the report, was deliberately born out of concern over the legal implications such language would entail. The internal deliberations surrounding the report and the implications of it became so contentious that Secretary of State Mike Pompeo at one point postponed its release indefinitely, only releasing it after pressure from legislators. But it is exactly that pressure that is part of the strategic imperative for pushing for a formal declaration of genocide. Yes, the United States has enacted new sanctions in the recent past, but it has yet to move the position of the Myanmar government nor satisfy U.S. legislators.

In a highly polarized political environment, calling Myanmar’s Rohingya campaign an act of genocide is one of the few bipartisan issues with support in Congress. Leaders and members of the Republican and Democratic parties, led by the Republican chairman of the U.S. House of Representatives Foreign Affairs Committee, Rep. Ed Royce, have urged the Trump administration to make a formal declaration of genocide. In a recent hearing, held two days after the release of the State Department’s report, Chairman Royce stated: “Making a formal determination of genocide must be the next step for the U.S. Defining these atrocities for what they are is critical to building international public awareness—and support—to stop them.” This position was supported by Ranking Member Rep. Eliot Engel, the committee’s top Democrat, with a similar bipartisan statement being released by members of the Senate Foreign Relations Committee.

Beyond simply being a bold decision that would help the State Department get its “swagger” back, this is a rare issue that the Trump administration could easily rally bipartisan Congressional support behind it. For an administration that is constantly looking for “wins,” it presents a rare opportunity to garner a “win” that both Democrats and Republicans can agree upon. Moreover, this does not only pertain to the domestic sphere: the situation in Myanmar represents one of universal concern shared by the United States, UN, and European Union. With a recent Pew Research poll finding that seventy percent of global respondents did not have faith in this administration to do the right thing in world affairs, the United States should seize the initiative on the matter.

Several weeks ago, former U.S. ambassador to the UN Nikki Haley announced that she was pushing for the UN investigators behind the recent report, which carries the phrase “genocidal intent,” to brief the UN Security Council (UNSC). This decision came out of a recognition that “the military are at fault, the fact-finding mission came out and gave clear examples of what’s happened. It’s time for the international community to move.” If the international community is to move, it will need a leader and the United States can define itself as such by taking the step of formally declaring a genocide at the upcoming UNSC meeting.

However, this must not be a standalone action, but the beginning of a tightening of U.S. policy on Myanmar that is reflective of the gravity of this charge. Secretary Pompeo has already stated that the United States will hold those responsible accountable and that the Myanmar military must respect human rights.

Yet, the Myanmar government has done neither and remains defiant, as was in full display at the UN General Assembly this past week. Myanmar does not fear “global scrutiny” and U.S. actions, such as not even enforcing previous rounds of sanctions, have signaled that it should not. Making a formal declaration of genocide as the first step in intensifying policy on Myanmar is a logical move for the Trump administration. It would allow Washington to signal to the Myanmar government, the U.S. Congress and the international community that this is not acceptable behavior and that the United States has decided to be a leader on this issue.

Reflecting on Bosnia, President Bill Clinton noted “We learned that in the Balkans, inaction in the face of brutality, simply invites brutality. But firmness can stop armies and save lives.” That firmness can start with the uttering of one word: genocide.

Sean P. Maguire is currently a research assistant in the Food Security Program at the Stimson Center. Maguire previously worked in the Stimson Center’s Defense Strategy and Planning Program, where he focused on the use of U.S. military force in pursuit of foreign policy goals. Maguire obtained his M.S. in Global Affairs from Rutgers University and his B.A. in International Political Economy from Fordham University.