Trump Should Focus Like A Laser On the Economy, Not Impeachment 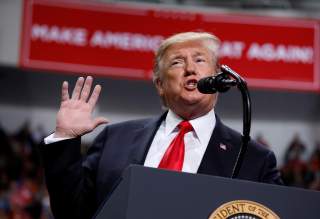 It’s time for Donald Trump to become Clintonian. “It’s all about the economy, stupid,” is the line that President Trump may want to steal from Bill Clinton for his 2020 reelection campaign. After a rocky week in which Democrats moved towards impeachment and he was mocked at the NATO summit meeting in London by other world leaders, Trump finally got some good news on Friday. To what will be the heartburn of his detractors, the economy appears to be firing on all cylinders with 266,000 jobs created in November and unemployment at a 50-year low.

Democrats will continue to push ahead with impeachment, but a strong economy will help insulate Trump from the charges. Rep. Jim Jordan tweeted, “.@SpeakerPelosi is counting impeachment votes. Here’s what President Trump is counting: -266k new jobs -54k in manufacturing -Unemployment at 50 yr low -Wages up 3% Less taxes and regulation, more freedom for you and your family. Get gov’t out of the way, and the economy booms.” Senate Republicans such as Mitt Romney or Cory Gardner will be less likely to defect from Trump’s side if he is able to boast that his economic policies are paying off. The impeachment proceedings will proceed and Trump will continue to be enraged by the attacks on him. It’s also the case that his personal lawyer Rudy Giuliani may come under formidable pressure to cooperate with federal authorities. According to the Guardian, Giuliani’s former associate Lev Parnas is cooperating: “If Parnas strikes a deal it could put further legal pressure on Giuliani, who is facing a growing number of legal woes including some relating to his international consulting business as part of an investigation of alleged crimes including money laundering, wire fraud, campaign finance violations, making false statements, obstruction of justice, and violations of the Foreign Agents Registration Act. Trump has already sought to disassociate himself from Giuliani’s Ukraine activities. In an interview with Bill O’Reilly, he indicated that “Rudy has other clients, other than me.”

When it comes to impeachment, the prudent course for Trump is not to engage with the brickbats that are tossed in his direction. Instead, he should focus on touting the resilience of the economy and the promise of even better days ahead. He can leave the interrogation of his adversaries to Sen. Lindsey Graham, the head of the Judiciary Committee, who may summon Adam Schiff to testify. But Graham indicated that there are boundaries. Asked if he would subpoena Schiff’s phone records, Graham demurred: “We’re not going to do that. When members start subpoenaing each other as part of oversight, the whole system breaks down.”

Whether Trump has the discipline to adopt this restrained course, however, is an open question. Targeting Democrats is like catnip for him—and they’re responding in kind. House Speaker Nancy Pelosi was withering on Thursday, lashing into Sinclair Broadcasting reporter James Rosen for asking her if she “hates” Trump. Pelosi fired back that she doesn’t hate anyone and is merely following her constitutional duty. “Don’t mess with me,” she added. Her truculence seemed slightly at odds with the pious sentiments she had earlier voiced.

At the same time, former vice-president Joe Biden, on his “No Malarkey” bus tour of Iowa, ventilated his contempt for a voter who asked him about the dealings of his son Hunter in Ukraine with the Burisma company. Biden was irate. He challenged his interlocutor to an IQ and pushup competition. If nothing else, Democrats are becoming as pugnacious as Trump, which is why the Senate trial of Trump in 2020 could take some unexpected turns.

What’s unclear is the extent to which Senate Republicans will be willing not simply to vote to exonerate Trump, but also to defend him. Trump should keep a wary eye on Romney and others. Already Romney has expressed his disbelief that Ukraine interfered in the 2016 election and heaped the blame on Russia. On Tuesday, Romney said, ““I saw no evidence from our intelligence community nor from the representatives today from the Department of State that there is any evidence of any kind that suggests Ukraine interfered in our elections.”

Even as he watches how impeachment proceeds, however, Trump would be wise not to become consumed by it. He’s got the good news to tout. For now, his strongest play is to focus like a laser on the economy.