Trump Should Have Already Left NATO 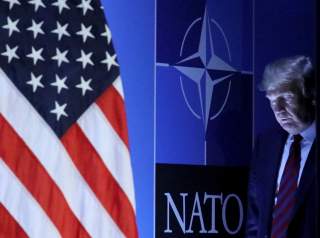 IT WOULD seem self-evident that wise leaders should always seek to maintain the maximum degree of flexibility and choice in foreign policy. Commitments and strategies that may make sense under one set of conditions can become obsolete and even counterproductive when circumstances change. Therefore, it is imprudent and potentially dangerous to lock one’s country into a set of rigid, long-term obligations.

Unfortunately, NATO is the premier example of a willingness—indeed eagerness—to violate that important principle. NATO was an institution to deal with the Cold War; it is not only obsolete for the conditions of the twenty-first century, it has become a dangerous albatross around the neck of the American republic. U.S. leaders continue going out of their way to limit America’s policy options in order to “reassure” a growing roster of European security dependents that the United States remains willing to incur any risk and pay any price to protect them, no matter how trivial and vulnerable they might be. That policy badly needs to change.

Rigid and/or obsolete commitments have caused problems for great powers throughout history. Perhaps the most tragic example occurred during the years leading up to World War I. Europe’s major countries had divided themselves into rival security blocs, the Triple Entente and the Triple Alliance. When tensions soared in 1914 following the assassination of Archduke Franz Ferdinand, the heir to the Austro-Hungarian throne, those alliances transformed an emotional, but limited, dispute between Austria and tiny Serbia into a continental crisis. Today’s NATO is the potential incubator of a similar catastrophe.

The fear of being locked into unjustified and potentially dangerous security commitments was a key reason why America’s founders were so averse to “entangling alliances.” In his Farewell Address, George Washington made an important distinction between permanent and temporary alliances. He asserted that the United States should “steer clear of permanent alliances with any portion of the foreign world.” Such obligations would tie the republic to partners for unforeseen contingencies far into the future. Conversely, Washington acknowledged that “we may safely trust to temporary alliances for extra-ordinary emergencies.” It was an astute distinction that in no way reflected the simplistic notion of “isolationism.” Instead, his strategy embodied the principle of selectivity, and it expressed a shrewd note of caution that is even more relevant today than it was in Washington’s time. NATO has become the ultimate permanent alliance, with all the defects and perils of such an arrangement.

Later influential American political figures echoed Washington’s admonition to preserve the maximum degree of choice and flexibility in U.S. foreign policy. Both in his Senate speeches opposing ratification of the North Atlantic Treaty, and in his subsequent book, A Foreign Policy for Americans, Senator Robert A. Taft stressed those points. He dubbed his approach the policy of “the free hand.” That standard also should be the core principle of U.S. policy toward Europe in the twenty-first century.

A MORE limited, flexible approach would not imply U.S. indifference to geostrategic developments in Europe. It certainly would not be based on the silly notions that knee-jerk advocates of the policy status quo habitually trot out—the canard that a more selective strategy amounts to “isolationism,” or “turning our backs on the world,” or renouncing all aspects of “U.S. leadership.” It is long past time to move the NATO policy debate beyond such overwrought, mind-numbing clichés and discuss meaningful policy choices.

Unfortunately, pro-NATO types cling ever more tenaciously to an outdated status quo. Indeed, many of them express a sneering resentment toward the mere suggestion that NATO has outlived its usefulness or that Americans should consider alternative policies. There is a worrisome degree of groupthink and a herd mentality in favor of the alliance within both the U.S. foreign policy community and most of the media. Such a phenomenon is unhealthy with respect to any policy debate, but it is especially so regarding the future of U.S. security policy toward Europe. Continuing the blunders that have marked Washington’s European policies since the demise of the Soviet Union is not only wasteful but increasingly dangerous. Rote invocations of the alleged need for an endless U.S. commitment to NATO do not change that reality.

It is imperative to overcome the stifling influence of stale thinking and vested interests regarding NATO. Article V is a de facto automatic commitment to go to war if an ally (however minor or strategically irrelevant) becomes embroiled in an armed conflict, and such an obligation is more imprudent than ever before. The costs and risks of Washington’s security obligations to its European allies now substantially outweigh any existing or potential benefits. When a great power reaches that point with regard to any policy, the need for drastic change becomes urgent. America’s NATO commitment has arrived at that point. U.S. leaders must craft a more nuanced and selective security relationship between the United States and Europe.

A fresh strategy would embody several important principles, and adopting those principles may well determine whether the United States enjoys a prolonged era of peace or finds itself repeatedly drawn into petty conflicts that have little or no relevance to the fundamental interests of the American republic. Even more important, embracing the correct principles may determine whether the United States can avoid a cataclysmic military collision with a nuclear-armed Russia.

Constantly invoking the history of NATO solidarity as a reason to preserve the alliance (as NATO’s defenders do) epitomizes a foreign policy based on nostalgia. Regardless of the relevance NATO may have had during the long Cold War with the Soviet Union, we need a new strategy for a very different era and a very different Europe. Nostalgia is an extremely poor foundation for an intelligent foreign policy.

AN APPROPRIATE new security strategy would recognize that although the United States has some important interests in Europe, not everything that occurs on the continent is essential to America’s well-being. There is a vast difference between preventing a hostile would-be global hegemon, such as the Soviet Union, from gaining control of Europe versus trying to resolve every incident of political upheaval or every dispute among two or more European nations. Most incidents, however disagreeable or disorderly, do not pose a potential existential (or even meaningful) threat to the United States.

The turmoil that accompanied the break-up of Yugoslavia in the 1990s is a prime example of a development that warranted no more than a minimal, purely diplomatic, U.S. effort. It certainly did not require America’s military involvement, much less the assumption of the leadership role to micromanage the distribution of political power within the former Yugoslavia’s successor states.

A well-conceived strategy would have avoided such pitfalls. It would have realized that sorting out post-communist political arrangements in the Balkans did not constitute a systemic crisis that could create chaos throughout Europe and impinge on crucial American interests. The nature, severity or scale of the turbulence (much less all three factors) never came close to reaching the point that the United States needed to intervene. Such events were modest, sub-regional changes that the major European powers, either through the European Union (EU) or on an ad-hoc basis, could have—and should have—managed on their own. U.S. involvement, especially military involvement, should be reserved for negative developments that pose a serious problem for the entire transatlantic region, not merely constitute a parochial conflict, however unfortunate, in a strategic backwater like the Balkans.

Conversely, if a great power and would-be European hegemon like Nazi Germany or the Soviet Union arose and began to pursue an extensive expansionist agenda, such a development would clearly be a matter of grave concern for the United States. Few Americans would be willing to tolerate the emergence of a hostile power capable of dominating Europe and being intent on that goal. If a European security entity could not contain the rise of such a hostile power, the United States might have to intervene. But in the world of the twenty-first century, that is an exceedingly remote scenario. NATO partisans are inclined to hype much more limited problems (such as Russia’s actions in its immediate neighborhood) in an effort to preserve their cherished institution and their own prominence. But Americans should not allow such exaggerated fears to be a pretext for preserving an obsolete policy that perpetuates Washington’s micromanagement of Europe’s security affairs.

ANOTHER BADLY  needed feature of a new transatlantic policy is U.S. willingness to treat the European Union (or even an alliance restricted to the handful of major European powers) as a credible security actor, not a perpetual U.S. dependent or obedient junior partner. European military capabilities are far from trivial, even though they can and probably should be enhanced. Most security disruptions that have arisen on Europe’s perimeter, including the mundane territorial disputes between Russia and such neighbors as Georgia and Ukraine, are not major threats that bring important American interests into play.

As in the case of instability in the Balkans, such problems are far more relevant to the European nations than they are to the United States. Europe’s principal powers not only can handle such challenges on their own, they should be expected to do so. Collectively, EU members have three times the population and an economy nearly ten times larger than Russia’s; that is a sufficient foundation to build whatever deterrent and defense forces are needed.