Trump Should Make These Tweaks to His Economic Agenda 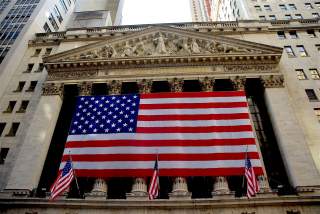 The great stock market rally since the election has proceeded on hopes that Trump will keep his more welcome campaign promises and forget others. Now, the White House needs to act in order to give that hope fundamental underpinnings in accelerating economic growth, improving productivity, rising wages and advances in profitability. Three campaign promises in particular will support such aspirations: tax reform, an upgrade of the nation’s infrastructure and regulatory relief, especially protection from arbitrary action. If, at the same time, Trump forgets his implicit promise to start a trade war, he just might produce his promised economic improvement.

The underlying need is to restore the confidence. More than any other single thing, its loss during the past eight years or so has led to substandard economic performance. To be sure, excesses of confidence can produce all sorts of economic and financial problems. An unrestrained enthusiasm for real estate earlier in this century culminated in the financial crisis of 2008. Now, however, the problem is a paucity of confidence, a timidity that has restrained innovation and hiring as well as investments in new facilities, equipment and technology. This lack of what the great economist John Maynard Keynes called “animal spirits” has held the pace of real growth to half its historic recovery average, slowed the pace of new startups to half that averaged ten to fifteen years ago, and prompted businesses, both large and small, to hoard cash instead of using it for investments and acquisitions, as they would have in the past.

Admittedly, policy cannot affect one important factor in this grim picture. Much of today’s timidity stems from a legacy of fear created during the great recession of 2008–09. Many firms went bankrupt during that time. Others came so close that managers have little desire to put resources at risk, lest even a slight economic reverse will put the company in an untenable situation. Not even the most eloquent of presidents, of which Trump surely is not, can erase memories. But the administration is lucky in that time is on its side. The further into the past these foul memories drift, the less sway they will have. There are already tentative signs in survey responses by business managers that these fears have begun to evanesce. That fact alone bodes well for economic growth and dynamism. If Trump can build on it with effective policy initiatives, then he will have gone a long way to shaking the economy out of its lethargy.

Tax reform is key, especially the corporate code. Politicians, business people, academic economists and analysts have long identified the country’s corporate tax code as a major impediment to growth. The opaque complexity of its maze of special breaks and exclusions has created gross inequities and made business less effective and efficient by either confusing decisionmakers or by directing them to consider tax instead of economic matters. Both Democrat and Republican reformers over the years have proposed a fix that would sweep away the breaks and exclusions and use the revenues thus gained to lower the statutory rate for all business. Trump has promised similarly to eliminate selective tax breaks and reduce the statutory rate from 35 percent at present to 15 percent. Quick action along these lines would eliminate this long-standing impediment to growth and efficiency.

Inadequate infrastructure has held back the economy’s pace of growth more and more each year as neglected facilities deteriorate further. The last few years have also suffered from the inadequacies of the otherwise huge, almost $1 trillion infrastructure-spending plan of 2009. Though this program seemed promising when announced, it disappointed. Much of the money went to helping state and local employees keep their jobs. Although such measures offer themselves as legitimate counter-cyclical actions in recession, they very much disappointed a business community that had looked for spending on roads, bridges, seaports, airports and the like. Indeed, the diversion of monies helped create a sense of despair that Washington, DC would never address the problem.

If Trump follows through with his $550 billion planned infrastructure enhancement, it would not only have direct physical benefits but also lift this sense of despair. If combined with other tax reform proposals, it would even avoid the adverse budgetary effects about which some have worried. Along with the simplification and statutory rate reduction, the administration has also proposed a one-time tax holiday for firms to repatriate the huge amounts of accumulated profits they hold abroad. According to the Trump website, a relatively low rate of 10 percent would serve as a huge incentive. Should all the moneys held abroad come home to take advantage of the holiday, the Treasury would receive a one-time revenue infusion of $350 billion, allowing the government to finance much of the proposed spending on infrastructure without too adverse a budgetary impact.

On the regulatory front, Trump has talked about disassembling the Dodd-Frank Wall Street Reform and Consumer Protection Act, replacing the Affordable Care Act and reassessing all regulations to weigh their benefits against their costs, most especially in employment. Whatever their absolute value, these huge pieces of legislation and past aggressive regulatory actions could not help but create confusion. The sudden and less than transparent way they were they were implemented only added to the uncertainty. The Affordable Care Act, for example, passed eight years ago and still carries ambiguities on the expenses of hiring. The Dodd-Frank Wall Street Reform and Consumer Protection Act, even now, seven years after its passage, still requires rules written on one-third of the matters taken up in the legislation. Aggressive and seemingly arbitrary administrative rulings have left business unsure about the permissibility of planned initiatives. If the reforms proposed by this White House can clarify just partially and leave the impression that the authorities will apply future rules judiciously, the effort will help restore confidence and enhance growth prospects.

On the unwelcome side, Trump’s plans to raise tariffs and impose other forms of import restrictions. These would work powerfully against any potential benefits from other policies. Not only would a tariff wall and other import restrictions invite retaliation from foreign buyers of American goods, they would raise living costs for Americans and lower living standards accordingly. What is more, a hike in import costs would impose disadvantages on American producers that depend on foreign sourcing, so much so that they would likely have to cut back on their production, hiring and expansion plans. Such huge impediments to prosperity could easily offset the combined favorable impacts of tax reform, regulatory review and infrastructure refurbishment.

The picture is fraught with enough ifs and buts to raise doubts that even if Trump tries to move along these general lines the country can fully realize all the potential benefits. Still, there is much in the White House proposals to offer reason for optimism that the economy will break out of the substandard growth pattern of the last few years. Already, this expectation/hope has buoyed stocks. Now the White House has to act quickly, not on tariffs, but to sustain those hopes/expectations and give them substance for the market’s sake and for the economy’s sake.

Milton Ezrati is contributing editor of the National Interest, an affiliate of the Center for the Study of Human Capital at the University at Buffalo (SUNY), and recently joined Vested as its chief economist. His most recent book, Thirty Tomorrows, describing how the world can cope with the challenges of globalization and aging demographics, was released recently by Thomas Dunne Books of Saint Martin’s Press.