Trump Should Repair Trade Deals, Not Destroy Them 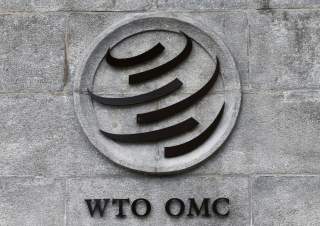 On July 6, President Donald Trump implemented 25 percent tariffs on $34 billion of imports from China and has threatened hundreds of billions of dollars of additional tariffs on Chinese imports—all under a law that the U.S. promised its trading partners years ago it would not use unilaterally. This action follows in the wake of 25 percent duties on steel and 10 percent duties on aluminum now in place against most U.S. trading partners in the name of national security. For many in Washington on both sides of the aisle, the President’s decisions have been all but a declaration of war on the international trading system, an assault on what many believed were the settled benefits of the “globalization” that Team Trump has decried from the beginning. But it’s high time “globalists” take some responsibility for the declining constituency for free trade.

With the U.S. economy at virtually full employment, ninety-five months of uninterrupted growth (the third longest expansion in American history), manufacturing output at all-time highs, and financial markets soaring, it’s not crazy to ask why an anti-globalist constituency exists. But there are multiple economic and broader social forces at play in the United States that are driving this backlash. For one, the U.S. economy and society are undergoing profound changes. Productivity gains, technology, and automation continue to trade the need for blue-collar manufacturing jobs—and increasingly, low-skilled services jobs—for higher-skilled ones with concentrated effects in certain localities. For instance, a Deloitte study estimated that nearly two million manufacturing jobs will go unfilled by 2025 due to lack of skills in the American workforce.

China’s rise over the past twenty years, with its state-supported industrial machine, has also been a shock to the U.S. economy. A National Bureau of Economic Research study concluded that, since 2000, trade with China explains 25 percent of job losses in U.S. manufacturing. Nor is competition with China just about fair play. Americans rightly perceive that Beijing has bent the rules of the international system to its will, pirating intellectual property and manipulating global supply chains in ways that the creaking World Trade Organization (WTO) is ill-equipped to address, let alone punish.

Then there’s the folly of the pro-globalization side: Free traders and “globalists” have had a difficult time articulating the diffuse benefits of globalization in a compelling way. They also often have been slow to admit that globalization has had negative impacts. In fact, they would never concede that the enthusiasm for globalization may have gone too far, such as with trade rules now setting parameters for all types of domestic regulation.

Proponents have also largely glossed over what may need to be done at the domestic level to support economic liberalization and those left behind. Republicans and Democrats alike have failed to come up with comprehensive public and private policy solutions that prepare Americans in the current workforce as well as the next generation for the fast-evolving global economy.

Globalization proponents argue as self-evident that the United States has benefited from cross-border trade and investment enabled by the fruits of the global neo-liberal order. But simply reiterating the virtue of the post–World War II international order is ineffective and largely irrelevant.

Lastly, while few proponents of globalization would deny that the global trading system needs work, they have been reluctant to admit it. The last successful major negotiations that created the global rules we live by today were concluded twenty-four years ago and are badly in need of a refresh. While America has concluded fourteen free trade agreements in the meanwhile, many of them could use a dust off. For example, stepping up enforcement of existing and new rules against those countries that don’t follow the rules will be imperative. But, all of this takes stronger U.S. leadership than we’ve seen over the past twenty years and building “coalitions of the willing” among like-minded countries to accomplish the continued spread of free and open markets—bedrock American values—across the globe.

Sure, unilateral actions combined with the Trump administration’s threats to leave the North American Free Trade Agreement and the WTO have almost completely undermined trust in U.S. leadership of the rules-based international trading system. This is unfortunate because it is the very system that America built out of the rubble of WWII and which has been a key source of economic growth, stability and security for the United States and globally. But the actions taken so far reflect the Trump Administration’s views that the United States has been losing from trade—that international trade rules and trade agreements are rigged against Americans and undermine U.S. sovereignty.

The necessary retort to that assertion is not to flog the same dead horse free traders have been beating for more than half a century. It’s time to appreciate the weaknesses of the system, fix them, and find more effective ways to communicate the benefits. This is because the truth is that open markets have contributed to lower prices for consumers. Increased domestic competition from imports has led to a more efficient allocation of resources and a more competitive economy. The rules-based system has given business confidence to invest and creates opportunities for America and other countries to grow, thereby contributing to a more peaceful international order. Trade liberalization and the global participation in a rules-based trading system has also been the most effective means of lifting billions of people out of poverty.

Now is not the time to throw away a system that has done miracles. Now is the time to fix the system, recognize its flaws, and implement the fixes that will again mean prosperity for all Americans.

Josh Meltzer is a senior fellow at the Brookings Institution and Neena Shenai is an attorney and a visiting scholar at the American Enterprise Institute. They are leading a joint, nonpartisan project on reconceptualizing globalization.