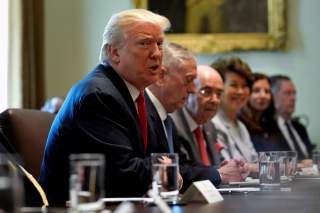 As expected, President Donald Trump has signed into law the “Countering America's Adversaries Through Sanctions Act,” and appended, as predicted, a presidential signing statement outlining his view of the legislation.

What is quite interesting is that the president did not veto the bill, even though he disagrees with some of its provisions. Trump did this due to a desire to preserve and enhance national unity, because of his assessment that an outright veto would prove to be too divisive. Trump ran on a platform of wanting to explore ways to improve relations with Russia. He seemingly accepts that the American people, through their elected representatives in the Congress, do not share his confidence that some sort of "deal" could be reached with the Kremlin or that he can be trusted to negotiate with the Russians. At the same time, his statement is a message to Russian President Vladimir Putin that the provisions of the sanctions legislation do not reflect his own personal views and have been promulgated in spite of his stated preferences—almost a plea to not disrupt the personal channels because of the actions of the Congress.

Putin, of course, has already heard regrets from three previous U.S. presidents about how much they would, at different points, have loved to do more with Russia, but were constrained by congressional action. He may or may not be inclined to give Trump the benefit of the doubt, particularly when other senior members of the administration are indicating that they have no problems with what the Congress has mandated. His initial response to the new sanctions, over the weekend, was to require the United States to drop the size of its mission in Russia to match the numbers of Russian diplomats and staff in the United States, as well as to take back certain properties the United States had use of. Whether further steps will be taken, either by the Washington or Moscow, is unclear. The first Russian reaction struck primarily at the U.S. government. What remains to be seen is whether pressure will increase on U.S. companies doing business in Russia.

The signing statement follows templates seen in the Bush and Obama years where a president makes an argument that certain provisions in the legislation are unconstitutional, and where the president indicates that he may, for political reasons, voluntarily comply with provisions without accepting that he can be mandated or compelled to take action. Everyone—from Putin to members of Congress to our European allies—will want to see Trump begin to fill in the fine print to his statements that he will “give careful and respectful consideration to the preferences expressed by the Congress in these various provisions and will implement them in a manner consistent with the President's constitutional authority to conduct foreign relations” and his expectation that “the Congress [should] refrain from using this flawed bill to hinder our important work with European allies to resolve the conflict in Ukraine, and from using it to hinder our efforts to address any unintended consequences it may have for American businesses, our friends, or our allies.”

So, what sort of guidance the administration gives the various organs of the Executive Branch charged with implementing the provisions of the bill, starting with the Treasury Department, will be critical. It will also depend on what priorities his cabinet officers and agency heads set. In order to prevent a rupture with our German and Italian allies, for instance, it may be necessary not to apply the full panoply of provisions, particularly if we do not want to see divisions in the trans-Atlantic approach to Russia.

Finally, and most critically, the administration must now negotiate with the Congress over very clear parameters for sanctions review. Special envoy Kurt Volker, tasked by Secretary of State Rex Tillerson to spearhead the U.S. effort to search for a solution to the Ukraine crisis, needs to know exactly what leverage he has at his disposal as he starts he talks with the Russians. Ostensibly, full compliance by Moscow with the Minsk Accords should permit the lifting of the sanctions that were codified as a result of events in East Ukraine (separate from the ones put into place over Crimea or over the 2016 elections)—and the administration needs the clear commitment from Congress that if Russia is certified to be in compliance, that presidential action lifting or suspending those sanctions will not be challenged.

But the administration does not have a great deal of maneuvering room. And the very title of the legislation he signed should end, once and for all, any talk about "strategic partnership" between Moscow and Washington. Russia is now unambiguously described as an adversary. This does not mean that conflict is now inevitable, or that any type of cooperation between the two countries is now ruled out. Space and Syria may still be two areas where the United States and Russia can find common ground to work in a collaborative manner. But the air has now been cleared. It means that not only can we not expect Moscow’s cooperation in a variety of areas that matter to U.S. interests, we must assume that Russia will take more active measures to oppose the United States.

Finally, as I noted, the sanctions are not a "fire and forget" measure. It will take delicate and painstaking work, using a variety of diplomatic and economic tools, to prevent further consolidation of the Russia-China strategic partnership and to disincentivize the formation of an anti-U.S. balancing. If those efforts fail, then Washington must concentrate on strengthening the capacities of states throughout the greater Eurasian landmass to balance a Russia now deemed to be hostile. The Congress, in particular, will also need to answer critical budgetary questions. The 2012 Defense Strategic Guidance assumed that the United States could pivot to Asia while winding down operations in the Middle East and withdrawing from Europe. A simultaneous repivot to Europe cannot occur within the context of a "rebalance" to Asia and steady-state operations continuing in the Middle East. The U.S. Navy, for instance, cannot simultaneously be present in the Arctic, the Baltic, the Mediterranean, the Persian Gulf, the Indian Ocean, the South China Sea and the Sea of Japan under current force structure plans—not to mention returning to old Cold War deployments to secure the Atlantic and Caribbean basins. How all of this will take place within the context of an "America First" approach is not at all clear. The president, his national security team and Congress will have to work together to find the answers.

Nikolas K. Gvosdev is a contributing editor at the National Interest and a professor of national-security studies at the U.S. Naval War College. The views expressed in this article are those of the author alone.