Is Trump Starting a War with Iran? 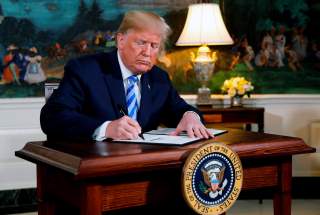 In 2015, John Bolton laid out a clear plan to stop Iran from building a nuclear arsenal. He declared in the New York Times, “The inescapable conclusion is that Iran will not negotiate away its nuclear program. Nor will sanctions block its building a broad and deep weapons infrastructure. The inconvenient truth is that only military action like Israel’s 1981 attack on Saddam Hussein’s Osirak reactor in Iraq or its 2007 destruction of a Syrian reactor, designed and built by North Korea, can accomplish what is required. Time is terribly short, but a strike can still succeed.” The deal, in other words, was that there could be no deal.

Now Bolton has won. Regime change is in. Negotiations are out. In abrogating the nuclear agreement today at the White House, President Trump sided with Bolton, who stood nearby along with Vice President Mike Pence, another longtime foe of the accord. All that was missing from Trump’s remarks was a reference to an end to evil.

None of Trump’s actions or rhetoric should come as much of a surprise. Despite his talk about America First, Trump has always been first and foremost a hawk. And throughout, Trump has made his disdain for the accord and hawkishness about Iran plain. “Horrible” and “insane” are a few of the terms that he has employed to describe the deal. The reason for his loathing seems plain enough. It was negotiated by Barack Obama. Trump also bridled at the adult daycare center that former Secretary of State Rex Tillerson and former National Security Advisor H. R. McMaster tried to run. The result was that Trump engaged in his personal form of regime change, replacing them with such stalwart hawks as Mike Pompeo and Bolton.

Bolton, who has been thirsting for redemption ever since the George W. Bush administration—when the Senate refused to confirm him for the post of UN ambassador—hit it big with Trump. So ham-handed was McMaster that even Bolton’s celebrated moustache no longer proved an impediment to his ascension. By April, with both Tillerson and McMaster gone, Trump had removed any internal obstacles to jettisoning the Iran accord.

But whether Trump will actually take any tough actions remains an open question. It’s easier to talk about regime change than to create it. Trump’s remarks today were a case in point. “The United States no longer makes empty threats,” Trump said. But he never really said what he was threatening. A land invasion of Iran? A bombing campaign? Booting Iran out of the SWIFT international banking agreement? For his part, Bolton said that the administration will pursue the toughest line possible to strangle the Iranian economy: “The decision that the president signed today puts sanctions back in place immediately. ... We're out of the deal."

Trump defended his move by stating that it would help avert a nuclear Middle East: “If I allowed this deal to stand, there would soon be a nuclear arms race in the Middle East.” But the opposite seems more likely. If Iran redoubles its efforts, then Saudi Arabia and other countries will seek their own deterrent, as soon as possible. The prospect that Iran will be willing to negotiate a new deal now that Washington has unilaterally abrogated the current one seems minuscule. Hardliners are sure to declare that the old one constituted a form of naïve appeasement to the West. Better to seek to build a deterrent and ensure the security of the regime.

Perhaps the most important effect of Trump’s move is that he has now put his own stamp on the administration’s Middle East policy. He, and he alone, must now take responsibility for the course that America is charting in this turbulent, violent and hostile region. The political stakes could not be higher. Trump will now be measured by the success or failure of his approach to both Iran and North Korea. Coming weeks will show whether he really seeks a policy of rollback or containment.

Democrats immediately declared that Trump’s Iran move was, as Sen. Dick Durbin put it, a “mistake of historic proportions.” Sen. Mark Warner lamented that the Trump has created a “wedge between us and our allies.” Meanwhile, tensions with Europe are going to rise dramatically. Trump’s new ambassador to Germany, Richard Grenell, issued what amounted to a diktat on Twitter today: “As @realDonaldTrump said, US sanctions will target critical sectors of Iran’s economy. German companies doing business in Iran should wind down operations immediately.”

The Europeans will try to maintain the accord, but their chances of success are slender indeed. None of French president Emmanuel Macron’s air kisses were enough to help dissuade Trump from saying au revoir to the deal and British foreign minister Boris Johnson, who flitted aimlessly around Washington for the past few days seeking an audience with Trump, was reduced to tweeting today, “Deeply regret US decision to withdraw from the Iran nuclear deal. UK remains strongly committed to the JCPoA, and will work with E3 partners and the other parties to the deal to maintain it. Await more detail on US plan.” He may be awaiting awhile.