Trump Takes the Oath, the Left Goes to War 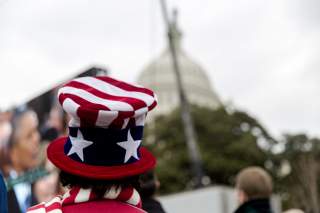 Reading the inch-and-a-half-tall front-page headline of the January 21 issue of the Washington Post—“Trump takes power”—you might have thought there’d been an overnight coup d’etat.

But perhaps we should have expected it. In the weeks since Donald Trump won the presidential election, incredible amounts of ink in the Post and the New York Times, and endless hours of fraught speculation by liberal members of the commentariat, had been declaring the death of democracy, pursuing crackpot conspiracy theories and frantically searching for the latter-day equivalent of Reds under the Bed. Russian “influence,” Russian “interference” and even Russian manipulation of the vote count became first-page fodder in “mainstream” newspapers that had dismissed Trump as a shallow bully and buffoon, while smugly predicting a landslide for their old friend Hillary Clinton.

Perhaps their anger and embarrassment at getting so much of their election coverage so wrong explains their frantic witch hunt for—to borrow a phrase from the Nixon White House—a “sinister force,” sometimes pursuing multiple conspiracy theories that are mutually contradictory. First we were told that, according to unnamed senior administration sources, Vladimir Putin’s minions had done everything they could to achieve a Trump victory. As that narrative began to crumble for want of credible evidence, a long-discredited “dossier” bankrolled by Trump opponents as purely partisan “opposition research” resurfaced. It purported to locate Donald Trump in a Moscow hotel suite engaging in what might euphemistically be characterized as water sports with a bevy of Russian hookers.

This particular smear was so rank and unsubstantiated that the Post and the New York Times refused to run it. But, when all else fails, there’s always CNN, which treated the politically bankrolled character assassination as hard news . . . and then had the gall to feign indignation when the then president-elect Trump called them to account for peddling fake news.

Meanwhile, on Inauguration Day the New York Times ran a front-page story headlined “Inquiry on Aides To Trump Studies Wiretapped Data.” Starting with a bang, the story ended with a whimper. Three paragraphs down, readers discovered that “it is not clear whether the intercepted communications had anything to do with Mr. Trump’s campaign, or Mr. Trump himself.” And it all came from nameless “current and former senior American officials” of the outgoing Obama administration.

Of course, there is nothing new about foreign governments playing favorites in other peoples’ elections. Soviet boss Nikita Khrushchev openly boasted about doing everything he could to help John Kennedy defeat Richard Nixon in the 1960 presidential elections. And, within the past year, President Obama has repeatedly leaked his disapproval of Israeli prime minister Benjamin Netanyahu and his preference for Netanyahu’s political rivals. He also publicly urged British voters to support what turned out to be the losing side in the referendum on Brexit. If Russian operatives played any part in obtaining the genuine dirty linen contained in various Clinton campaign emails from Hillary and other major players later released by Wikileaks, they were doing what anonymous “current and former senior American officials” do when they routinely pass on purloined government secrets to papers like the Times and the Post. Besides which, as numerous bloggers have suggested to Hillary and her coterie: if you don’t want to be revealed as corrupt, don’t do corrupt things. It works every time.

Even as the liberal media continue to push the conspiracy meme questioning the legitimacy of the Trump presidency and trying to create a latter-day Watergate conspiracy out of thin—and decidedly hot—air, it is simultaneously playing up social and political divisions to inflame and alienate the electorate. Thus, the day after Donald Trump took his oath of office, the Post followed up with another front-page headline implying that the people were already rising against the evil, yellow-maned Lion King: “Marchers answer inauguration,” and further down, “Voices resonate for rights—and against Trump—all over the world.”

Tiananmen Square, here we come—only this time it’s Donald Trump versus the human race. Actually, the Friday inaugural and the Saturday women’s march revealed something altogether different about who is, and who is not, tolerant and respectful of the rights of others within the American body politic. It was a fascinating study in contrasts, especially if you were in a position to witness it yourself rather than read about it in the Post or the Times.

On both Friday January 20 and Saturday January 21, large numbers of people came to Washington to participate in legal, nonviolent events celebrating their beliefs. I was downtown on both days as a private citizen participating in neither event, but I did keep my eyes open. On Friday evening I saw broken windows, smoldering fires and at least one burnt-out car. I also saw television coverage of “demonstrators” trying to disrupt, sometimes violently, the legal, nonviolent events (inaugural-related) that many thousands of their peaceful fellow citizens were trying to attend.

Then, on Saturday, I was downtown again while large numbers of people came to Washington to participate in another nonviolent event celebrating their beliefs: the Women’s March. While many people disagreed with some of the more extreme and obscene posters and chants of some of the fringe participants, there were no angry, violent crowds of protesters trying to block access to the demonstration, throw stones, set fires, or shriek abuse at the participants.

On Friday I saw intolerance and thuggish attempts to interfere with peaceful citizens celebrating a national event. On Saturday, I saw peaceful citizens celebrating a national event without having to face violence and abuse from those who disagreed with them. It’s called tolerance and respect for others. It was there on Saturday, but not on Friday.

Think about it. The only bullying and oppression was being done by the very people who accuse Donald Trump and his supporters of being bullies and oppressors. And when shrill and sometimes abusive anti-Trump marchers and speakers filled the city the next day, nobody bullied or abused them, nobody threw stones and hurled insults, and nobody tried to stop them from participating in the event they came to attend.

Aram Bakshian Jr. served as an aide to presidents Nixon, Ford and Reagan. His writing on politics, history, gastronomy and the arts has been widely published here and abroad.