Trump and the Art of Rope-a-Dope Diplomacy 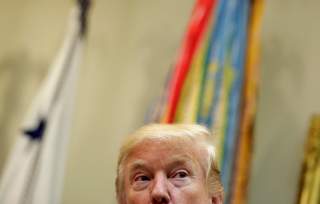 For more than a decade now, whenever the topic has been North Korea, Beijing has played on Washington’s instinct to avoid confrontation by talking nice and delivering nothing. And all the while, China has continued its long-term stratagem not just to edge American power out of Asia, but to establish a global diplomatic, economic—and to a lesser extent military—presence that will position China as a superpower for generations to come.

On occasion, Beijing speaks well, declares that it tried, and then folds its arms. The April meeting at Mar-a-Lago was a case in point. President Trump felt he had a commitment from Xi to pressure a belligerent regime in Pyongyang. At the time, it was all smiles, nods and handshakes. Within weeks after returning home, however, the clear message to the United States was—as it has been consistently for many years—that Washington should back off and negotiate with Pyongyang.

The Chinese game is clear: continue to entice the Americans into believing the easy path is engagement—but deliver nothing. This both makes Washington look feckless and foolish and buys time for Beijing to press for incremental gains in places such as the East and South China Seas, which are designed to cow American allies, sow doubts about American staying power, and crowd the United States out of its status as the region’s preeminent power.

But Trump handed out a little rope-a-dope of his own after Mar-a-Lago. He offered Xi an “off-ramp” for reducing tensions between the two regimes by doing the United States a solid on North Korea.

Trump’s rhetoric has had its ups and downs. Before Mar-a-Lago, he was very critical of China and its relationship with North Korea. After Mar-a-Lago, he claimed Beijing was doing more than ever to pressure North Korea. In June, he thanked China for trying to help on North Korea, but lamented that it hadn’t worked out. After the July 4 missile test, he was hoping for a “heavy move” by China. Most recently, after another test, Trump bashed the Chinese for not helping at all.

But follow what Trump has done in the Pacific, not what he has said or tweeted. The United States has reinstated Freedom of Navigation operations in the South China Seas in a way that promises to be more consistent and assertive than Obama’s effort. And the Chinese don’t like it.

Trump announced an arms deal with Taiwan. Beijing wasn’t happy with that.

The Trump administration also imposed sanctions on Chinese entities doing business with North Korea. Hopefully, more are on the way. The Chinese know this, and they’re not pleased.

Clearly, the U.S. commitment to its interests in in the Pacific is not up for negotiation—for concessions on North Korea or anything else.

When Trump showed up at the G-20 he was all smiles with Xi. But the two leaders did not exactly exchange high-fives. Clearly, Xi had gotten the message—two can play at this game.

Despite what many of his critics might think, Trump has diplomatic skills. He may never be the world’s most popular American president, but he has the instincts and interest to influence the world stage. He has already met with a phenomenal number of foreign leaders for a rookie president. Exchanges such as his recent go-round with Xi shows Trump can give as good as he gets. He could be a player.

Playing whack-a-mole with Beijing, however, is not a strategy. But the roots of a strategy tailor-made for Trump are there.

The challenge for this administration is that it has set its sights on being forward engaged in three major theaters at the same time—Europe, the Middle East and Asia (with an active role also in Central America). In two of those theaters, not just China, but Russia are players. Both dabble in the Middle East as well.

So what Trump needs is a consistent strategy to deal with both Beijing and Moscow—a strategy that can also offset the two nations playing off each other against the United States.

Step One: For starters, the administration needs to keep its public open-door policy open to both states—with caveats. The world would be a better place if these powers practiced peaceful co-existence, but not on terms that undermine America’s position in the world. When Trump makes conciliatory gestures to either Moscow or Beijing, he is not offering them concessions, he is offering them an off-ramp—better relations—if they stop impinging on U.S. interests. There is nothing wrong as a matter of policy with keeping the offer of an off-ramp on the table.

Step Two: An off-ramp is not enough. Next, Trump needs a dependable means to deal with Chinese/Russian bait-and-switch, where one state appears to be helping while the other stabs the United States in the back. First rule: Don’t ask for anything from one state where you are not prepared to push back if they don’t follow through—or punish both states if they pull a bait-and-switch. Second rule: As a rule, don’t ask for anything. Measure improving relations by Beijing and Moscow bringing win-win proposals to the United States rather than asking them for something to test the status of the relationship.

Step Three: Being cagey with both states means not having to depend on either to protect vital interests and having the capacity to safeguard U.S. concerns in all three theaters (as well as deal with the challenges of the transnational criminal networks pressing on the Southern border). That calls for a more muscular American policy.

Trump’s instincts are right—a persistent forward presence in all three key strategic regions requires a “peace through strength” military, not one hollowed out or distracted by regime change and nation-building. Instead, American military power should focus on reassuring (as with our NATO partners) or aiding (as with Iraq and Afghanistan) friends and allies and deterring major conflict. Right now, U.S. military power is “marginal.” That is not enough to sustain Trump’s strategy over the long term. He needs a military build-up.

This administration also needs better soft power. Obama built a State Department that was good at advocacy. It should be restructured so that it is good at action. Hopefully, Secretary Tillerson will deliver the needed change.

Further, to efficiently operationalize American power, the United States needs strong bilateral relations with key allies in each region. Truth is, the administration is more aware of this need than many critics give the Trump team credit for. The White House recognizes that it has shared responsibilities with friends and allies in key regions. In fact, in the end, Trump may actually be better at alliance building than his predecessors—treating allies more like partners than subordinates.

Finally, the administration needs to fill out the “white space” in its regional strategies. How will it sustain the solidarity and effectiveness of NATO over the long term? How will it put Iran back in the box and keep ISIS 2.0 or Al Qaeda affiliates from destabilizing the region or metastasizing into global threat or a danger to the U.S. homeland? Also, how will it to keep China from crowding America out of the Asia-Pacific?

Publically, expect to see Trump continue to play rope-a-dope. If he backs this diplomatic repartee with real substance, America might wind up in a stronger place.