Trump and the Art of the Israeli-Palestinian Deal 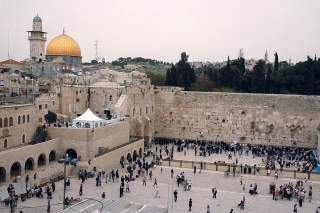 As Israeli prime minister Benjamin Netanyahu visits the Trump White House this week, it’s worth asking ourselves a few questions: Is there any possibility that Donald Trump can broker the biggest real-estate deal in modern history? If not, can we at least take concrete steps towards peace?

Having spent the last three-plus years working on this issue at the Department of State, I learned that a major source of friction in the day-to-day Israeli-Palestinian relationship is not the existential final status issues, like the fate of Palestinian refugees, the final borders, or even the ultimate permanent status of Jerusalem. Instead, it is the day-to-day interactions between Israel, the Palestinian Authority and the Palestinian people that are the immediate problem. And the source of that problem is that those interactions are governed by agreements that date back to 1993, which are now seriously mismatched with reality. Instead of providing a pathway to a solution, those agreements have become actual irritants that instigate conflict.

The agreements need to be updated. Donald Trump, coauthor of The Art of the Deal, could be just the person to make that happen. After all, he’s talked about a final Israeli-Palestinian agreement as “the ultimate deal.” So updating existing agreements and penning new ones on discrete issues could at least be a step in the right direction.

Now, none of these deals are perfect, and President Trump knows better than most that signing an agreement isn’t the end of the road, but just the beginning. Implementation and communication are key. And that’s where a Trump administration can come in. First, just like constructing a building or launching a hotel, years of diligent work that are required to make any enterprise successful. If Trump can ensure that these agreements work, then he will have removed a series of irritants from the Israeli-Palestinian relationship. If that relationship is properly communicated, then perhaps those agreements could lay the groundwork for an even larger deal.

And there are even ways for Trump to take this further. One solution that has been proposed would embrace a deal that gives Palestinians more control over their own lives in the West Bank—in a way that does not impact Israeli security. This wouldn’t be a final deal, but one which helps further advance the cause of peace. Here’s the status quo: Palestinians only have control—in round figures—of about 20 percent of the West Bank and partial control of another 20 percent. More than 60 percent is under full Israeli control. Meanwhile, the World Bank estimates that if Palestinians could boost their economy by as much as 33 percent—adding $4 billion to their $12 billion economy by gaining control of that 60 percent—that would be the elusive “ultimate deal.” That deal is currently out of reach.

But there is a way: Some calculate that if Israel were to transfer a small percentage of the West Bank from full Israeli control to partial Palestinian administration—carefully selecting land for its economic value to the Palestinians while still retaining Israeli security control—this would create an economic boom for the Palestinians. We all know that a thriving economy leads to happier citizenry and less violence. Indeed, with per-capita incomes more than ten times higher in Israel ($38,000) than they are in the West Bank and Gaza ($2,800), the situation is already a cause for alarm to the Palestinian leadership and the Israeli generals who seek security, stability and prosperity. With this additional land, the burgeoning Palestinian population—currently 2.7 million in the West Bank—could more rapidly grow their own economy. Tens of thousands of desperately needed housing units could be built. New agribusiness ventures could be developed. New stone and marble mines could be opened. Solar fields and power plants could be developed. Also, tourism could prosper at holy sites and along the Dead Sea. Furthermore, the economy, in general, could prosper if Palestinians were allowed to exit the West Bank twenty-four hours a day, seven days a week—instead of only during prescribed hours. Such an approach could perhaps add a billion dollars to the $12 billion Palestinian economy.

Additionally, the Trump White House will need to focus on Gaza, where nearly two million souls are crammed into an area twice the size of Washington, DC, where unemployment is as high as any country on earth, where only one third of the dire electricity needs can be supplied, and where 95 percent of the water is unfit for human consumption. It’s a perfect prescription to spark another conflict. Gaza desperately needs two things that can be provided without impacting Israeli security: First, it needs a dramatic increase in the power supply to at least give its economy a chance to function. Second, it needs water. No longer in short supply in Israel due to dramatic advances in desalination, water could be piped in, or it could be desalinated in Gaza. Both areas are ripe for an agreement due to important work that has already been done by Israelis and Palestinians.

And finally, East Jerusalem: although every Israeli leader asserts that Jerusalem will remain Israel’s eternal capital, most also acknowledge that a successful agreement will need to find a way for both peoples to maintain a relationship and connection to the city, which now extends miles beyond its historic walled center into expansive Arab and Jewish neighborhoods. But since 2001, the Palestinian relationship with the city has been greatly diminished, and even the Israeli court system has ruled that there should be more Israeli investment in the schools and roads of Arab neighborhoods. To rectify the problem, additional agreements could be pursued. First, an agreement could be made to allow some of the almost two dozen institutions shut down over a decade ago, such as the Arab Chamber of Commerce, to reopen. Second, an agreement could be made to remove the threat of demolition to thousands of Arab homes in the expansive city.

By brokering all of this, Trump would tamp down on European criticism of Israel, help transform the Israeli relationship with the Palestinian people and, in turn, help the Arab world in a way that actually strengthens Israel’s security. This may not be the “ultimate deal” that Trump spoke about. But full implementation of these types of existing agreements, and the signing of new big ones—for the West Bank, Gaza and East Jerusalem—could potentially significantly advance Israeli-Palestinian relations in a way that brings prosperity to the Palestinian economy and, in turn, more peaceful relations on the ground. And that should be something we can all cheer—Israelis and Palestinians in the Holy Land, and even Democrats and Republicans here in America.

Hady Amr is the former senior economic adviser to the Special Envoy for Israeli-Palestinian Negotiations for the Department of State. He tweets at @HadyAmr.