Trump on the Defensive 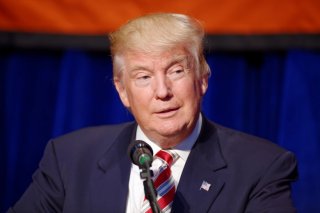 It was a study in contrasts. Hillary Clinton came out in an iridescent red pantsuit, presumably to convey vigor, passion, anything other than the bloodlessness that she’s often accused of displaying. Trump, by contrast, was somberly dressed, befitting his dire message that just about everything in America and abroad is a “disaster,” the word that he continually deployed. Clinton was perfectly coiffed and barely moved a muscle, other than to display a mocking smile when Trump spoke. Trump shifted, squinted, and bobbed around when Clinton delivered her remarks.

Too often he let Clinton get under his skin, interrupting and shouting at her, which is precisely what she wanted him to do. She stood by coyly as he flew off the handle. His refusal to prepare properly for the debate was glaringly apparent. He should never have gotten into a convoluted discourse about how he, apparently privately, told Sean Hannity that he opposed the Iraq War. He should simply have said that he quickly decided it was a disaster and focused like a laser on Clinton’s vote for it, which was far more consequential than anything he did or said at the time.

What’s more, to conclude by complaining that Clinton isn’t “nice” to him looked weak. It pretty much goes without saying that the job of a candidate for president is not to be nice to their opponent. It’s to take them out. The blunt fact is that Clinton controlled the tempo of the debate. For his second debate, Trump, if he wants to make a real run at Clinton, will have to up his game. He can start by taking his advisers more seriously.

A more effective tack would have been for Trump to focus single-mindedly on the fact that Clinton is a professional Washington politician, who, as he noted, has been in the game for thirty years. He should have presented himself as the candidate of change with a sweeping new vision for both domestic and foreign policy.  When Clinton referred to where America was eight years ago at the outset of the Great Recession, Trump could have said that what’s coming is far worse—and that the foreign policy debacles abroad prefigure what is about to occur at home.

At times, Trump spoke at a machine-gun clip, diving into minutiae about a Value Added Tax in Mexico and the carried interest deduction, not to mention invoking the name of Sidney Blumenthal, someone whom few Americans outside the Beltway have ever heard of. Meanwhile, Clinton was very careful to refer as much as possible to “Donald,” as though she were a grade schoolteacher alluding to a particularly nettlesome student. She was also careful to speak slowly, delivering prepackaged phrases that offered something for everyone apart from the wealthy, a class that she joined as quickly as possible. Overall, the exchanges between Clinton and Trump were more than “spirited,” as the evanescent moderator Lester Holt put it. They were often quite brutal.

Neither candidate really offered much of a vision for the American future. Trump was most impassioned when he spoke about the flight of jobs from the American Midwest and the need for “law and order” in American cities, which he said often resemble a “living hell.” If anything, he confirmed that he is really something of a liberal when it comes to domestic issues. His excoriations of the state of American infrastructure sounded as though it came out of the pages of the New Deal playbook. But he didn’t really explain how he would revive the American economy, whether it was tax or spending policy.

Whether viewers could divine much of a Clinton program, either, is an open question. Like Hamlet, Trump essentially said that she offered “a lot of words.” It was a fair criticism. Clinton offered up paid family leave, debt free college, and a host of other goodies that Congress will never pass. Trump was also right to complain about the “political hacks” who led America into disaster like Iraq. But he never tied it consistently to Clinton, who spoke in glittering generalities about foreign policy, eliding her own long record of championing disastrous interventions abroad. In personalizing the debate between him and Clinton, Trump inadvertently ended up giving her a free pass.

Whether this debate really will prove the demise of Trump is another matter. Perhaps no one’s demise has been predicted more often than Trump’s. And simply by staying in the ring and landing a few punches, he may have insured his survival for another round. Get ready for debate number two. The new storyline will be whether Trump can mount a comeback or not.