Trump, the G-20 and the End of American Superiority 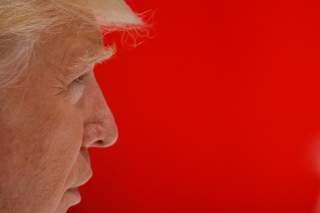 One hundred years ago, America reluctantly entered a war that set new standards of inhumanity among—and between—the Great Powers which had started that war nearly three years earlier. The U.S. intervention was costly but proved decisive. After victory, a twenty-year time out, dubbed “the interwar years,” ended with another war, which America joined, no less reluctantly and as decisively. This time, though, there was no coming home. After victory, nine U.S. presidents from Harry Truman to George H. W. Bush, all different in character and background, organized an institutional order for a world that might at last proved to be worthy of America—open, liberal, motivated and rules-based.

Less than six months into his presidency, Donald Trump served notice in Hamburg, Germany, that the United States no longer deemed the order to be relevant. To set things straight—end the “carnage” at home and save Western values abroad—America is not retiring. Instead, America is taking a leave of absence, although with full pay for services rendered, including expected returns from past investments (in Europe and elsewhere) and new business opportunities (with Saudi Arabia and others). Call it a global version of repeal and replace: the “world we made,” as Robert Kagan called it, is set aside, for lack of clarity and purpose. But can it be replaced?

Although German chancellor Angela Merkel was very much in charge in Hamburg, the U.S. president was predictably the meeting’s central figure. Admittedly, the unipolar moment that followed the Cold War did not outlive the wars of 9/11 in Afghanistan and Iraq. Yet, the United States has remained the world’s most and only complete power. And with America in the lead, the world absorbed repeated system-changing shocks from which it might not have recovered otherwise—including the September 2001 terror attacks, the 2008 financial crisis and the 2011 Arab Spring. In each instance, and others, the worse might have been avoided had America acted earlier and differently or more effectively; but in most instances, too, things would have likely been worse had America failed to act at all.

But now what? If not the United States in the lead, who? For China, which remains an incomplete and untested power, it is too early; for Russia, which is a one-dimensional and overextended power, it is too late; and for Germany, which has become the reluctant and scarred leader of an unfinished EU, it is still too awkward. Elsewhere in the G-20 there are BITS of power with regional influence—Brazil, India, Turkey and Saudi Arabia. The four countries are assiduously courted but seriously limited by their own contradictions, insufficiencies or excesses. Even when their contributions are acknowledged as indispensable, they cannot be decisive.

In short, take out one of twenty and you get close to zero: this is faux multipolarity, with the consequence that the balance of the decade is shaping up arguably as the first moment of global disorder ever, a variation on the interwar years of the 1920s and 1930s—en pire?

Back then, it was the United States that seized the baton of Western leadership from a failed Europe; there is little evidence, though, that Europe can now do the same, even pending America’s return in 2020? Brexit, Putin and Trump have paradoxically restored some needed momentum for an “ever closer union” in Europe: Brexit, because it has shown its former partners how difficult it is to leave the EU; Putin, because he has reminded his neighbors how dangerous it is to live safely next to Russia; and Trump, because he is ending Europe’s reticence to move out of its U.S. shelter. Watching Chancellor Merkel dismiss Trump’s views on climate change, or hearing the newly-elected French president, Emmanuel Macron, deploring the “narrow-minded nationalism” of some, was indicative of an unfolding transfer of authority, from the one to the many.

Admittedly, there is plenty of geopolitical theater here. A new institutional order will be neither reset nor recast without or against the United States. Yet, by comparison to the Euro-Atlantic G-2 that emerged out of the Cold War, any other G-2 is a fake, at best conducive to a dialogue on one specific issue at a time. Beyond that issue, whatever it is, there is too much history that stands in the way, not to mention clashing interests, different goals, incompatible values and uneven capabilities.

Neither a multilateralist à la Obama nor a unilateralist à la George W. Bush, Trump is a bilateralist who thinks of one G-2 per issue, one issue per G-2. After he used Warsaw, the “geographic center” of World War II to sketch the specter of a war of civilizations, he turned to Vladimir Putin as a partner of choice in Syria. His goals “are exactly the same” as ours, Secretary of State Rex Tillerson surprisingly claimed. But by any standard, the Global War on Terror is not World War II, and regardless of what is thought of an analogy between Putin and Stalin, Trump is no Roosevelt and Assad’s Syria is no Hitler’s Germany. The idea of “pooling” Russian and American resources, another Grand Alliance, sounds odd: to what end and at what price, and past a possible ceasefire, with what consequence and follow ups? Who is using whom? The age of imperial viceroys is over.

Little has seemed normal over the past eighteen months, but that is no reason to delete prior knowledge and forego common sense. Hold on, therefore—what will come out of this moment, the Trump moment, is worrisome but not clear yet. For a while a least, it may be better to forget about trends. Predictability has had an especially poor record of late. As History stutters, events no longer seem to add up and memories of this failed G-20 will hopefully fade soon. The new American vision is a disappointment to at least half the world—the half which Dean Acheson emphasized “at the creation.” The Trump administration claims to have “a clear-eyed” understanding of “an arena where nations, non-governmental actors and businesses engage and compete for advantage.” For those who still believe in the American dream this is not a compelling vision.

And yet, it is true that history now seems to be making a dangerous U-turn. “Common goals have never been so threatened,” said French president Macron at the close of the G-20 meeting. For those of us who remember how much has been accomplished over the past half-century, this is not an acceptable conclusion either. President Trump will spend his next weekend in Paris, which is a good thing, not as a tribute to him but in recognition of all that America has contributed since President Wilson took the country back to its First World. While watching the military parade, of which Trump is said to be especially fond, he, Macron and all those watching in Europe and around the world will hopefully be reminded that the best way to face the unsettling moment ahead is to stay the course set over the past seventy years. With and for us, there is still an institutional order worth preserving and completing, at twenty and many more.

Simon Serfaty is professor and Eminent Scholar in U.S. foreign policy at Old Dominion University in Norfolk, Va., and the Zbigniew Brzezinski Chair (Emeritus) in Global Security and Geopolitics at CSIS, in Washington, DC.