Trump: The Media's 'Goose with the Golden Eggs' 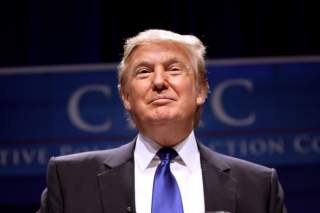 No, Jorge Ramos, the anchor of Univision, was not, as Donald Trump would have it, “raving like a madman,” as he initially tried to interrogate him about immigration. Quite the contrary. Ramos was far too shrewd for that. He wanted to profit from the encounter, which is what he did by turning himself into a martyr of a mini-deportation executed by Trump’s entourage. Conflict sells.

But this wasn’t investigative journalism; it was an exercise in self-promotion on behalf of the entertainment-industrial complex. Let’s face it: there is nothing, as Greg Sargent recently noted in the Washington Post, evasive or unclear or confusing about Trump’s stance on immigration—he wants what he calls the “humane” deportation of illegal immigrants. Not “self-deportation.” Not some of them. All of them. Plus a fence.

Trump’s braggadocio, his palpable contempt for conventional pieties, his willingness, in short, to blow a raspberry at the regnant elites has the American media in something of a frenzy. A battery of Fox News anchors is rushing to...Twitter to defend Megyn Kelly’s honor. But despite the tut-tutting about Trump’s current ascendancy, the truth is that Trump—whether it’s Fox News and Kelly or the Washington Post—is the best thing that’s happened to the media this summer. Why else would Ramos now be swanning around about his showdown with Mr. Big? Tonight, in a perfect convergence of media personalities, the Unavision anchor will be interviewed, if that's the right word, by Kelly. All of this is of course good for Trump as well: as Dr. Johnson observed to Boswell, "A man who tells me my play is very bad, is less my enemy than he who lets it die in silence. A man, whose business it is to be talked of, is much helped by being attacked."

The fundamental problem isn’t that Trump is somehow corroding the democratic process, as his detractors would have it. It’s that the media itself is battening on the entertainment phenomenon—succumbing to the temptation to turn every event into a mini-drama. It’s the way to get clicks and attention. People magazine, to put it another way, has become the model for how to write about people. But as Sam Tanenhaus, the former editor of the New York Times Book Review, reports in an important essay in Prospect (itself one of the last surviving serious magazines), this development is deeply injurious to the news profession itself, at least if it is to offer informed and reasoned analyses of current affairs.

[w]hat are coming into view only now are disruptions in the ways print journalism is written, edited and published, the almost continual heightening and vivifying of the news into melodrama, each item juicily spread before the reader like an episode of House of Cards. It is happening even in the United States’s greatest newspaper, the New York Times (where I worked for nearly a dozen years). When Maureen Dowd, a first-rate columnist with matchless Beltway sources, learned that Vice President Joe Biden was (once again) thinking of challenging Hillary Clinton for the Democratic nomination, prompted in part by urgings from his son, who died of brain cancer at the age of 46 in May, she didn’t simply relate this development, she contrived a miniature tele-novel: `My kid’s dying, an anguished Joe Biden thought to himself, and he’s making sure I’m OK.’ Such liberties aren’t really surprising in a columnist, and certainly not Dowd, whose gift is for measuring the ever-expanding egos of Washington “personalities.” What is surprising is the steady infiltration of `story telling’ into the Times’s news pages, including the hallowed acreage of `page one.’

This development is also scrutinized in somewhat different form by Richard Burt and Dimitri K. Simes in their timely new essay “Foreign Policy by Bumper Sticker.” They paint a bleak portrait of a foreign-policy debate that has degenerated into clichés, partly because of the erosion of standards in the media, where sensationalism trumps cerebration.

According to Burt and Simes:

Media coverage of world affairs has declined considerably in the post–Cold War period. American television networks and print media have far fewer foreign bureaus and reporters. Further, news programs rely heavily upon former officials and senior military officers, who generally do not express contrarian opinions, and their own nonexpert reporters. Public television has a couple of shows that allow more time for serious conversation and feature a broader spectrum of guests, but even there, guests face pressure to conform to prevailing narratives.

Debate can be even worse online. While the Internet makes these discussions far more democratic, the dramatic headlines and language necessary to get attention—and the ease with which debates become highly personal—discourage deliberate exchanges or nuance and privilege extravagant claims and nasty attacks. And while fashionable as a measure of impact, Twitter is an inherently poor vehicle for any serious conversation. What truly important issue can be distilled into 140 characters or fewer? Or, for that matter, into a fifteen-second sound bite?

This trend is likely unstoppable. But the mainstream media does have a singular luxury, at least for now. Even as the Times and Post and other outlets become increasingly complicit with the rise of the entertainment-industrial complex, even as they treat fluff stories as hard news, they will ostentatiously decry the trend and proclaim that they are holding themselves aloof from it. Until they don’t. Which will serve as its own kind of marker. Watch for it.