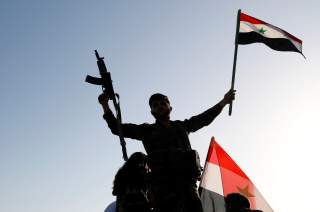 The joint United States, British and French attack on Syria focused exclusively on Damascus’ chemical weapons capability. It hit research, development and production facilities in three discrete locations. According to the Pentagon, it was a heavier hit than last year’s cruise missile attack on a base from which nerve gas had been launched, but still aimed to avoid civilian casualties as well as Russian and Iranian forces.

The Russians were told in advance in which areas U.S. aircraft would operate. Syrian but not Russian-operated air defenses responded, according to the Americans without effect. That raises questions about the capabilities of the air defenses Russia has provided to Syria as well as about Moscow’s possible tacit readiness to see the Americans chasten Assad. No United States or allied losses have yet been reported. President Trump has claimed “mission accomplished” and pledged to continue striking if President Bashar al Assad continues to use chemical weapons. The Russians are still denying chemical weapons were used and claim that many of the American missiles were prevented from reaching their targets.

What difference will this make?

The attack may well cause Assad to use chemicals less, but it isn’t likely to do any more than that. Assad has been on a roll since Russia intervened in his favor in September 2015, when it appeared Syrian opposition forces might threaten Assad’s heartland in in western Syria. Russian air power as well as Iranian and other Shia forces, including Lebanese Hezbollah, have tilted the military balance in Assad’s direction. Short of troops due to battle losses and defections, he has used chemical weapons repeatedly as a force multiplier despite the 2013 agreement to surrender them to the Organisation for the Prevention of Chemical Warfare (OPCW). He has hesitated to use nerve gas in the last year but has repeatedly used chlorine. We do not know yet what chemicals other than chlorine might have been used in last week’s attack on Douma, but the attack resulted in dozens of civilian deaths and the surrender of the remaining insurgents.

Douma was the last stand of the opposition in the eastern Ghouta outskirts of Damascus. The areas that remain outside Assad’s control, except for small enclaves here and there, are mainly peripheral: much of the north is under either Turkish or Kurdish control, the area east of the Euphrates belongs to American-allied Syrian Democratic Forces who include some Arabs, and parts of the south along the Jordanian border and the Golan heights are still held by relatively moderate opposition forces. Assad has succeeded in transferring most of the fighting opposition, especially its Islamist hardliners, to Idlib province west of Aleppo. Their last stand will come soon. Assad still has ample barrel bombs and artillery to use against civilian and military targets, as well as Russian and Iranian support. No one-off American attack on chemical weapons facilities is going to back down Assad from his now advantageous position.

Will the strike have any broader implications? Might it weaken Assad, tilt the battlefield against him, or even cause him to fall? Might it help to re-establish the prohibition on production and use of chemical weapons? Might it presage a continuing American presence or a more aggressive American stance in Syria?

It is unlikely to weaken Assad significantly. Even if he wanted to step aside, neither the Iranians nor the Russians would let him. No successor is likely to be kinder to their interests than Assad, and they fear any transition risks snowballing into regime change. The Russians may not like Assad, but they have backed him to the hilt with air power, weapons supplies, and Russian security contractors. Assad has given Moscow a toehold in the Middle East and an opportunity to teach the Americans that the region is no longer their exclusive terrain. Tehran, which is typically hyperbolic in opposition to chemical weapons because Saddam Hussein used them to be devastating effect in the Iraq/Iran war, has likewise done nothing to stop Assad from using chemicals. He has given the Iranians an opportunity to position themselves and allied Shia militias close to Israel, solidifying and extending what they term the “resistance” front along Israel’s northern border.

The prohibition on the use of production and use of chemical weapons is going to be difficult to re-establish. That would require great power unanimity, which is lacking. Moscow not only denies Damascus has used chemical weapons, but has itself used them against defectors, most recently in last month’s attack in Britain. It likely won’t be long before Moscow repeats or another miscreant follows Russia’s lead.

President Trump assiduously avoided in his announcement of a strike on Syria targets any indication that he is re-thinking the U.S. presence in Syria, which he has wanted to draw down sooner rather than later. He even looked forward to the day when that would be possible. Like his predecessor, Trump has concluded that American interests in Syria are strictly limited to defeating the Islamic State and preventing the use of chemical weapons. He is just as wary as Obama of a slippery slope toward greater involvement. Syrian opposition leaders are expressing disappointment in the strike, complaining that it won’t do anything to end the Syrian conflict.

Two American institutions were conspicuously absent from the events. The president acted on the basis of Article 2 of the Constitution without congressional approval, not on the basis of the existing Authorization to Use Military Force. It is limited to the war against Al Qaeda and by extension other Islamist extremists. Few in Congress are likely to protest, as the strike was narrowly focused on chemical weapons facilities. Both Democrats and Republicans regard chemical weapons use as odious. The State Department has also been AWOL. Apart from the obligatory UN Security Council session called for by the Russians, there appears to be no diplomatic strategy accompanying the military action, which was taken before OPCW inspectors could even reach the Douma site.

The raid was what it was advertised to be: a tightly targeted military strike strictly limited to the objective of punishing and deterring the use of chemical weapons. It shouldn’t be expected to achieve more than that. It presages no broader involvement in Syria or even clarification of U.S. goals and strategy there. It was the minimum President Trump could do to avoid being accused of allowing Assad to cross the red line without consequences. Trump always wants to be viewed as stronger and better than his predecessor, whose doubts about deeper involvement in Syria he clearly shares.

Daniel Serwer is professor and director of the Conflict Management program at the Johns Hopkins School of Advanced International Studies. He blogs at www.peacefare.net and tweets @DanielSerwer.

Image: A Syrian soldier waves a flag during a protest against air strikes in Damascus,Syria April 14,2018.REUTERS/ Omar Sanadiki​