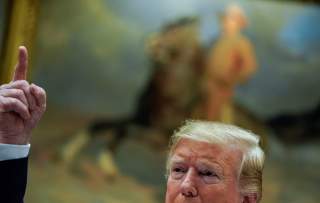 Not since the administration of Franklin Delano Roosevelt has American foreign policy been at crossroads with so many debates and discourse on how to proceed.

The Trump administration’s foreign-policy schizophrenia has seen the United States jettison from multilateral trade deals and pulling back from common security pacts such as NATO. It has alienated allies and expressed a strange softness for some former adversaries such as Russia.

President Donald Trump is following a path of Jacksonian populism that is only intermittently concerned with foreign policy, and believes in inherent protectionism. He represents a new challenge to transatlantic relations, which have long been predictable, even boring. Even their dysfunctions and disputes are ritualized and repetitive.

For a long time now, transatlantic relations can be described as a boring marriage spiced by the extra-marital affairs of a Russian security threat to Europe’s eastern corridor.

There are three pillars of Trump’s foreign-policy thinking from which he has never wavered. The first is the idea that America is getting a bad deal from its allies; the second is that the American approach to free trade has impoverished American workers and weakened the United States; and the third is that as, a strong leader, he can secure better deals with authoritarian strongmen than by working cooperatively with European allies.

Trump feels that America has been stuck with the bill for global security for generations.

The United States secures Europe but feels it gets little in return. The most pertinent problem for the transatlantic relationship is Trump’s apparent indifference to the American security guarantee. His view diverges from that of all his postwar predecessors, who accepted that shouldering the majority of the burden for providing Europe’s security is a fundamental national interest and a keystone of the Western-led international order.

Trump’s view of NATO is that the United States is getting a raw deal due to the economic cost endured while, as he sees it, European members contribute very little but get all the reward. Trump seeks to define U.S. interests narrowly and advance them in the safest and most economical ways. And affecting this is the transatlantic relationship.

In a time of turbulent economics and struggling per capita GDP, there is this resentment that the United States is no longer benefiting from these deals and is getting less and less from allies.

This sense of a bad bargain often seems to make Trump angrier at America’s allies than at its enemies. Trump’s thinking is that America’s enemies strike hard deals, but at least there is a sense of predictability in where they stand.

The European Union, which is not noted for its strong leadership, is therefore doomed in Trump’s view.

“I think the EU is going to break up,” he said in the days after the Brexit vote. “The people are fed up,” he added.

Trump’s faith in strong leadership means he believes that democracies cannot be strong unless they produce an assertive leader.

In a single line, Trump’s ethos espouses a sort of Americanism (which is overt nationalism and populism), over pragmatic globalism.

On the campaign trail in 2016, he often touted his expertise by referencing his best selling book, The Art of the Deal, and how he was the master of executing deals.

While European allies have been America’s key partners in every major foreign-policy endeavor, particularly in military operations, the EU should not be complacent in assuming that the transatlantic relationship will continue as it is and should begin to take more responsibility for its own defense and build resilience against a potentially more self-interested United States.

At the end of World War II, the United States was the lead architect of the liberal international order. Transatlantic relations were sown in with the Marshall Plan reconstruction of Europe. Some commentators and geopolitical analysts have dubbed Transatlantic security on life support.

At a time of critical thinking, it is Trump’s whose thinking has just been critical of allies. At a time of the fourth industrial revolution of Artificial Intelligence, it is Trump whose intelligence remains to be artificial when it comes to understanding multilateralism. Instead of open borders for trade, Trump has opted for closed borders and tirades.

While Brexit is a challenge for the EU, it could be a TREXIT (a Trump exit), that could be a more seminal moment in resuscitating transatlantic relations.

It remains to be seen if Trump will Make America Great Again, but he is making Europe Wait Again for better Transatlantic Relations.