Trump Trip: Listen to Japan, Talk to South Korea and Dictate to China 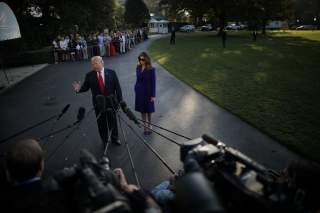 Geopolitical experts like to overcomplicate matters. Donald Trump’s first trip to Asia as president is, in reality, simple. All he has to do on the three initial stops—the most important of the five visits—is listen to Japan, talk with South Korea and dictate to China.

The selection of the first stop is significant. Fortunately, long gone are the days when American leaders signaled Chinese preeminence by beginning Asia trips with Beijing.

In these “Japan passing” years, Japanese prime ministers pleaded with U.S. presidents to adopt more resolute, determined policies with regard to the Democratic People’s Republic of Korea. Arrogant, distracted and negligent American leaders ignored the advice, which is one of the reasons the American people are in such peril today. It’s time Washington put an end to this unbroken record of underperformance.

Trump, to his credit, has already developed a good relationship with Prime Minister Shinzo Abe, so listening to him will not be either novel or hard. And it is also a good sign that Trump, at Abe’s request, will be sitting down with Shigeru and Sakie Yakota, the parents of Megumi Yakota. North Korean agents abducted the thirteen-year-old in November 1977 in her hometown of Niigata, bringing her to the North.

Kim Jong-il, the predecessor of the current North Korean despot, admitted during a 2002 meeting with Junichiro Koizumi, then Japan’s prime minister, to abductions of thirteen Japanese, including Yakota. The kidnappings of the young girl and others highlight the grotesque nature of the Kim regime and remind us that, as a succession of Japanese leaders have told their American counterparts, North Korea cannot be allowed to hold the world’s most destructive weapons.

In South Korea, he should talk to Moon Jae-in, the “progressive” president who took office in May. Moon, if he had his way, would be supporting the North Korean regime with aid, trade, and investment, effectively giving Kim Jong-un the means to build an even more fearsome arsenal.

So far, Trump has done a good job in restraining Moon from implementing his version of the “Sunshine Policy” of “engagement” of the Kim family regime, but the forty-fifth president by no means can declare victory. Moon, whenever, the opportunity presents, will be seeking to build bridges with the North.

Up to now, Kim Jong-un has rebuffed Moon’s overtures, but sometime soon the North Korean will switch course and hold his hand out for South Korean cash. In the meantime, President Trump needs to convince Moon that it is in his interest to support American policy even if it means he must spurn offers of “cooperation” from Pyongyang.

Also Trump needs to talk with Moon about his recent reconciliation with China. For more than a year, Beijing has been prosecuting an ugly campaign first to prevent Seoul from deploying the Terminal High Altitude Area Defense (THAAD) system and then to punish the South for actually doing so. The Chinese have been outraged that Seoul went ahead over their objections to base THAAD, as the American-built anti-missile system is known, on South Korean soil because, among other reasons, they felt its radars would peer into China.

Tuesday, the Chinese and South Korean foreign ministries issued a joint statement putting the feud behind them. Some are speculating that Moon gave Beijing secret assurances in order to end the spat. In any event, Tong Zhao of the Carnegie Tsinghua Center for Global Policy suggested to CNN that the joint statement was Beijing’s way of undermining the U.S.-South Korea alliance. Trump needs reassurance from Moon, who has harbored pro-China views throughout his career.

Finally, Trump should listen to and address South Korean fears that the United States might not defend the South. These days, the country’s politicians, like many in the region, are skittish about American staying power. The periodic B-1 overflights of the peninsula are more about messaging resolve to Seoul and Tokyo than conveying threats to Pyongyang and Beijing.

So in the South Korean capital it would be good for Trump to both talk and listen.

In Beijing, Trump should insist on doing all the talking. As Beijing’s diplomats are fond of saying, “he who has tied the knot shall untie it.” The Chinese in fact tied the North Korea knot by providing two—and probably three—generations of Kim leaders with the means to make nuclear weapons and ballistic missiles, so it is up to them to take away these instruments from the 300-pounder whom they sometimes call Fatty the Third.

And Xi can untie this particular knot. Having consolidated his position as China’s dominant political figure at the just-concluded Communist Party 19th National Congress and its First Plenum, he has no excuse not to marshal Chinese power.

And there is a lot of Chinese power to marshal. China accounted for 92.5 percent of North Korea’s external trade last year. China from year to year provides more than 90 percent of the North’s crude oil, much of it on concessionary terms. China is the source of at least a third of North Korea’s food, maybe 45 percent, something especially important because the drought this year was the worst since 2001. There are some years that China supplies 100 percent of the North’s aviation fuel.

China provides many things to the Kim regime, but the most important is confidence in the minds of senior figures that they are safe from the United States, South Korea and the international community.

Beijing may not have the power to change Kim Jong-un’s mind on the need for his arsenal—it’s possible no one can do so—but the Chinese can, if they want, convince regime elements that it is no longer in their interests to stick with either Kim’s weapons programs or Kim himself, who, after hundreds of executions and purges, is not particularly popular.

Chinese observers argue that Kim Jong-un’s defiance of China’s wishes proves Beijing does not have significant influence, but recent events suggest otherwise. Kim has accelerated the pace of missile tests—fifteen of them so far this year—but has not conducted one after September 15.

Moreover, the last major belligerent statement from Pyongyang was Foreign Minister Ri Yong Ho’s threat of September 25, made in New York shortly after the conclusion of the UN General Assembly meeting, to detonate a thermonuclear device in the atmosphere. Then, Pyongyang went quiet until a few days ago. It was only after the 19th Congress closed that a senior North Korean official told the world, through CNN’s Will Ripley, to take Ri’s sensational threat “literally.”

What to make of the lull around the Congress? My theory is that either Beijing told Pyongyang not to do anything provocative at the most sensitive time in the Communist Party’s political calendar or the North Koreans knew better than to anger the Chinese. If nothing else, the absence of provocative acts shows Beijing can control its only formal ally when it really wants to.

And Kim’s warm congratulatory message to Xi at the conclusion of the 19th Congress is another sign that either the Chinese can make their Korean allies do what they want or that the Koreans know their place.

American presidents have fallen for Chinese-North Korean denial and deception tactics for decades. Trump, who wields overwhelming economic and financial power over China, does not need to become another victim of the illusion.

Trump should tell Xi Jinping that the Chinese need to untie this particular knot and do so now.