Trump Is Trying to Forge His Own Speak-Softly Strategy 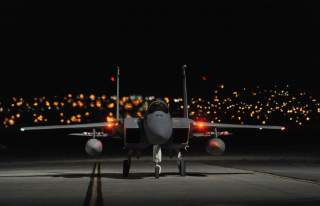 Senators gave Secretary of State Rex Tillerson a rough reception last Tuesday when he came before them to defend the Trump administration’s plans for the State Department. Tillerson conceded that the proposal to cut the department budget by nearly 30 percent had “necessitated difficult decisions,” but added later that “funding does not equal results.”

No one was buying it. Senate Foreign Relations Committee Chairman Sen. Bob Corker declared that the entire exercise was “a waste of time.” “The budget that's being presented,” he continued, “is not going to be the budget we deal with. It's just not.”

Later in the day, perennial Trump critic Sen. Lindsey Graham called the budget “radical and reckless.” The South Carolina Republican quoted Gen. James Mattis from his days as the head of Central Command. Back then, Mattis had called for increased State Department funding because otherwise he would “have to buy more bullets.” But now, Secretary of Defense Mattis appears to be going along with Trump’s planned cuts—or at least is staying quiet about them.

The harsh reaction to Trump’s budget should come as no surprise. Republicans and Democrats alike reacted swiftly in March when Trump’s preliminary “skinny” budget forecast deep cuts in most government departments in order to offset the large increases planned for the Pentagon and the Department of Homeland Security (DHS).

Trump obviously was undeterred, preferring a fight over compromise. But it does beg the question: Why did he dig in his heels on such an obviously unpopular proposal? And why does President Trump hold the State Department in such contempt?

It may be that Donald Trump sees himself as merely channeling earlier presidents who celebrated the virtues of military power. But, as is typical, some of the nuance gets lost when big concepts are boiled down to 140 characters.

For example, Ronald Reagan spoke of “peace through strength,” which fits on a bumper sticker, but he was not above engaging in high-stakes diplomacy, even with the “Evil Empire.” Reagan would never have considered cutting the State Department’s budget by a third.

Meanwhile, it is true that Teddy Roosevelt spoke of carrying “a big stick,” another slogan suited for the Twitter age. But TR was awarded the Nobel Peace Prize for helping to negotiate an end to the Russo-Japanese War, and was a firm believer in diplomacy.

President Trump obviously hasn’t mastered the first part of TR’s famous maxim, to “speak softly,” but he seems intent on spending more on the military, and is willing to cut virtually any other part of the federal budget (excepting the DHS) in order to get there. Although the U.S. military stick is already big—and certainly far more intimidating than anything that Teddy Roosevelt could have ever imagined—it isn’t nearly big enough as far as Donald Trump is concerned.

Many serious national security professionals agree. For example, in his book, The Big Stick: The Limits of Soft Power and the Necessity of Military Force, Eliot A. Cohen explains that “America needs a substantially larger military than the one it now has.”

And the United States must be willing to use it. Despite the fact that Americans have grown weary from a decade and a half of protracted conflict, Cohen explains that the nation must remain ready to wage—not merely deter—more wars. “Military power,” he writes, “is about the ability to crush, maim, destroy and kill…. There is nothing lovely about it. It is, however, indispensable … perhaps, more so than ever.” Meanwhile, Cohen dismisses past attempts to limit the use of force. “What is needed,” he explains, “is a prudent set of reminders to guide American leaders who have concluded, however reluctantly, that violence is the least bad policy choice.”

It is almost as though Donald Trump read Cohen’s book. Or at least the book jacket. Trump did, after all, promise to “bomb the s--- out of ISIS,” and has bragged about authorizing “my military” to drop the Massive Ordnance Air Blast (aka the Mother of All Bombs) on a target in Afghanistan. Donald Trump is many things, but no one can doubt his willingness to resort to violence.

The irony is that Eliot Cohen detests Donald Trump. Indeed, the bow-tied professor organized one of the first #NeverTrump letters, signed by over 120 Republican foreign policy professionals. And Cohen, like Lindsey Graham, John McCain and countless other hawks, is likely no fan of Trump’s State Department cuts. At one point in The Big Stick, Cohen explains that “U.S. military power must operate in cooperation with diplomacy, both together serving American foreign policy.”

But now, Cohen is forced to watch as Trump attempts to secure more money for the Pentagon. If the big stick that Trump inherited gets even bigger, Cohen and others who share his enthusiasm for a larger military used more often may quietly cheer that outcome, while hoping against hope that the man in possession of such incredible power doesn’t choose to wield it in a reckless manner.