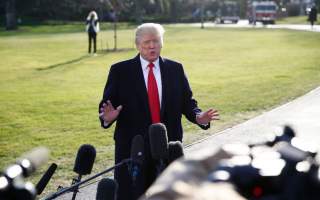 In any conflict, political, military or economic, the greatest challenge of presidential leadership is to recognize when the moment has arrived to force a decision. Knowing when to act is a matter of instinctive intelligence. Yet, for instinct to be meaningful, it must also be buttressed by an unshakeable will.

In his handling of the Korean crisis, President Trump has given a brilliant demonstration of these attributes. Premature euphoria is hazardous, but the conflict on the Korean Peninsula is likely to end; not with a bang, but a whimper.

America’s mission on the Korean Peninsula, and, indeed, in Northeast Asia is fulfilled. After World War II and the Korean conflict, American military power provided the shield behind which the Korean and Japanese peoples prospered. The shield worked.

The Republic of Korea’s (ROK) economy is larger than Russia’s and forty times the size of North Korea’s economy. Japan, the world’s third largest economy, created its own version of the industrial revolution by cultivating Japan’s competitive edge in business more effectively than any other modern nation-state. China has also evolved.

China continues to perfect its anti-access/area denial strategy, but China clearly does not present the military threat to the United States that the Soviet Union posed during the Cold War. In fact, China’s leaders are far more concerned with maintaining internal stability and control of 1.2 billion people than with launching wars to enact Chinese military dominion in Asia or anywhere else. China leverages its economic strength to pressure its neighbors on matters that it cares about in the seas that surround it, but China prefers to resolve its differences with Vietnam, the Philippines, the ROK​ and Japan through nonmilitary means.

In Washington—where no grand strategy exists beyond the unstated belief system known as liberal military hegemony—none of this is welcome news. In 2011 James Clapper insisted that China was the top strategic military threat to the United States. Seven years later and the military threat from China is still a foundational pillar in the Trump administration’s new national military strategy.

Still​,​ the weight of evidence confirms that President Trump’s initial impressions from his March 2017 meeting with President Xi were accurate: Beijing and Washington have more reason to cooperate than fight. Now, President Trump must act to curb Washington’s appetite for involvement everywhere—regardless of its connection to U.S. security or prosperity​—and focus American military power with greater precision.

First, it’s time to allow powerful allies in key regions to take the lead where U.S. and allied interests overlap. In Asia, Washington should view Tokyo, not itself, as the natural counterweight to Chinese influence. The combination of Japanese economic strength, regional diplomacy (particularly in Southeast Asia and the Western Pacific),​ and formidable naval power means that Tokyo can take the lead in ensuring freedom of navigation in the waters that surround China.

U.S. aerospace and naval forces can reinforce Japan as needed without raising fears in Beijing (or anywhere else in Asia) of an American attempt to alter the regional geopolitical status quo through intervention on the ground. In other words, the United States can withdraw its Army ground forces from the Korean Peninsula and the Marines from Okinawa; actions that will be warmly supported by the Japanese and Korean populations.

Second, Washington has pressing security concerns in the Western Hemisphere, Eastern Europe,​and the Near East. Washington pays too little attention to threats from criminality, corruption,​ and terrorism emanating from Central America and the Caribbean Basin. In Eastern Europe, Moscow’s unrelenting war on Ukraine creates a permanent catalyst for conflict with Moscow’s Western neighbors. In the Near East, Iran’s reaction to an American withdrawal from the Joint Comprehensive Plan of Action is unknown, but the potential for a military confrontation should not be excluded. Turkey, an ally on paper, has been drifting away from the United States and NATO for decades. It no longer has many geopolitical, security,​ or economic interests in common with the United States.

Third, U.S. Army ground forces must be reoriented to high-end conventional warfare, but this reorientation cannot be executed in isolation from the Air Force and the Navy. Survival in a battlespace dominated by precision-strike weapons with weapons-of-mass-destruction effects demand a fundamental shift in Army thinking and modernization away from ground-holding, light infantry-centric tactics to a force-oriented strategy within a joint, integrated maneuver framework. Upgraded versions of the Cold War army are not the answer.

With fewer than 475,000 soldiers on active duty, today’s smaller Army cannot field modern warfighting forces and still maintain large light infantry forces for counterterrorism. The latter are missions that should be assigned to the U.S. Marine Corps and Special Operations Command that together number 250,000 Marines, soldiers, sailors​ and airmen.

Imposing change on the four-star generals who made their careers through twenty-five years of counterinsurgency and nation-building will not be easy. The chiefs of service continue to set the requirements for multi-billion dollar programs, not the Office of Secretary of Defense, which rarely challenges Service budgets or priorities.

Yet,​ President Trump’s stature as commander-in-chief has never been greater. He can make these changes, extract large savings for reinvestment in America,​and stabilize our relations with Asia on terms that favor prosperity and peace.

Col. (ret) Douglas Macgregor, U.S. Army is a decorated combat veteran, a PhD and the author of five books. His latest is, Margin of Victory (Naval Institute Press).

Image: U.S. President Donald Trump talks to the media as he heads to the Marine One helicopter as he departs the White House to visit Walter Reed National Military Medical Center in Washington, U.S. December 21, 2017. REUTERS/Jim Bourg​