Trump vs. the Democrats: How Does the Government Shutdown End? 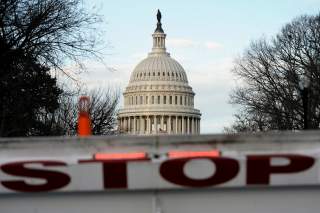 A terse statement from a congressional leadership office may tell us where things stand with the partial federal government shutdown: "Members are advised that no votes are expected in the House this week."

While a last-minute breakthrough is always possible, at least in theory, if that holds Washington could be about to settle down for a long winter’s nap. That’s because President Donald Trump is nearing the end of his time with a Republican-controlled House. Next week, Nancy Pelosi is set to reclaim the speaker’s gavel.

Republicans will retain the Senate and indeed enjoy a slightly bigger majority at 53-47. But Democrats in the chamber have the power to filibuster a spending bill that would reopen the government, meaning that at least seven votes from the minority party will be required even if the GOP has no defections.

“At this point it looks like we could be in for a very long-term shutdown,” House Freedom Caucus Chairman Mark Meadows (R-NC) acknowledged on CNN. Meadows may be part of the last House majority to approve the more than $5 billion the White House is requesting to fund the wall Trump wants to build along the border between the United States and Mexico.

So there is not an obvious path forward that would resolve the shutdown. Trump passed up better opportunities to fund the border wall and now finds himself in a situation comparable to the late George H.W. Bush’s “read my lips” pledge on taxes—without enjoying the same kind of support from the Republican establishment. The Democrats elected to Congress in November, even in the moderate suburban House districts, were not chosen for a Washington tour of duty in order to cooperate with Trump or build the wall.

Trump is under pressure from his base to deliver on core campaign promises like the wall after spending most of his political capital on shared conventional Republican agenda items, like the tax cut and Obamacare repeal, and losing the House anyway. He may feel emboldened after Senate Democrats capitulated on a previous immigration-related shutdown earlier this year. Even though Deferred Action for Childhood Arrivals (DACA) polls well, red state Democrats did not want to be seen as voting to shut down the government over it.

But some of those timorous red state Democrats ended up losing to Republicans in the midterm elections. Just as relatively moderate Republicans were the hardest hit in the House, comparatively centrist Democrats became scarcer in the Senate. Two of the survivors, Jon Tester of Montana and Joe Manchin of West Virginia, have six years to go until the next election after prevailing over Trump’s concerted efforts to beat them. And Trump has already assumed the “mantle” of—and therefore the blame for—the shutdown in televised remarks that easily lend themselves to campaign commercials.

As recently as 2013, Senate Democrats voted for the kind of border fencing that could plausibly be floated as a face-saving compromise for Trump. This includes party leaders like Chuck Schumer and Dick Durbin as well as possible presidential candidates such as Bernie Sanders, Elizabeth Warren, Sherrod Brown, Kirsten Gillibrand, Amy Klobuchar and Jeff Merkley. But that was part of the Gang of Eight deal that would have amnestied most of the illegal immigrants already inside the country while substantially increasing legal immigration—important context even in the unlikely event all these liberal votes for a bigger border fence were sincere.

There might have been a time when a DACA for the wall trade was possible (though Democrats were right to suspect such a deal’s questionable politics and the Stephen Miller types in the White House were correct that it would have been bad immigration policy). With Trump and congressional Democrats already in 2020 campaign mode over both immigration and the shutdown, that ship has likely sailed.

Beltway types overstate the political impact of these shutdowns. Ronald Reagan was easily reelected in a 49-state landslide despite losing shutdown PR battles. Republicans held onto the House after the 1995-96 shutdowns. The 2013 “defund Obamacare” shutdown didn’t stop Republicans from winning the Senate and generally having a very good midterm election the following year.

By the same token, all those shutdowns were fairly short-lived and far enough out from the elections. Virginia Republicans had to worry about the 2013 shutdown, and the federal workers in their state, close enough to that year’s elections to lose a close gubernatorial race. The 1990s shutdowns certainly helped Bill Clinton rebound from the disastrous 1994 elections and Trump needs similar perceptions of Democratic overreach to boost his chances in 2020.

Trump also needs to keep Senate Republicans happy—and inclined to view him as a political asset—well ahead of those elections in the event House Democrats try to impeach him. Pelosi will try to tamp down any progressive impeachment drive, but special counsel Robert Mueller or other circumstances could force her hand.

It is by no means clear how or when this stalemate ends, yet it is painfully obvious that it cannot go on forever.